Cut off Government Funds to Universities? Of Course.

If universities really want more say over who speaks on campus, they should stop accepting federal funding.

Milo Yiannopoulos, the controversial and polarizing poster boy of the alt-right, was scheduled to speak at the University of California at Berkeley last week. However, thanks to destructive riots that resulted in almost $100,000 in damages, the event was canceled just hours before it was due to begin.

As expected, President Trump had strong opinions about the incident, which he made publicly known on his Twitter account. 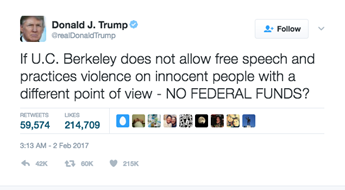 Threatening to cut almost $500 million in federal funding, Trump chastised the historic California university for canceling the event and accused its administration of obstructing the First Amendment right to free speech.

But notice: this suggestion comes as a threat, as punishment for failing to control protesters, the withdrawal of a subsidy as a punitive measure. This is not the way to achieve what we desperately need: cutting off all federal funds for universities as a matter of fiscal soundness and the principle of freedom itself.

Unfortunately, federal funding is almost always used as a means to force compliance.

Whether he realizes it or not—and it is almost certain that he does not—President Trump’s statement provided a compelling case for ending federal funding to all institutions of higher education.

One of the many problematic issues with federal funding is the tendency of politicians to use it as a bargaining chip against the opposition.

Partisan politics can turn ugly rather quickly, which is why budget cuts are often perceived as punishments rather than sensible economic decisions. As the saying goes, “he who holds the purse strings holds the power.”

Unfortunately, federal funding is almost always used as a means to force compliance from those receiving the financial aid. Institutions that choose to accept this money are soon likely to discover that they are required to adhere to certain stipulations that might not otherwise have been agreed to.

The Common Core standards, for example, were pushed onto the states through a federal stimulus package. Once this federal money was accepted, the states were required to adopt a curriculum that met certain standards.

The only way to really stay autonomous is to simply stop accepting federal funding.

Conveniently enough, the government was waiting in the wings with a ready-made plan that accomplished this goal. If states refused to comply, the federal money was retracted.

Luckily, private institutions are not subject to the same rules as the public sector. For those organizations that operate solely on private funds, it is much more difficult for the federal government to interfere, although not impossible.

If, for example, the student body was opposed to the idea of hosting a speaker they strongly disagreed with, a private university would have every right to deny that speaker access to campus facilities.

However, so long as federal funding is given and received by institutions of higher education, campuses have little to no recourse when it comes to censoring certain individuals on campus.

While President Trump does not actually have the authority to cut federal funding from U.C. Berkeley, every threat, substantial or not, comes with a hurricane of hysteria and fear over what the new president may do.

The only way to really stay autonomous without binding yourself to federal conditions is to simply stop accepting – and stop offering – this money altogether.