The growth in the craft beer industry has not been proportional across all states. Regulations that restrict how brewers can sell their own beer have inhibited growth in many states and have limited consumer choices on the shelf and at the tap.

Over the past 35 years, the number of breweries operating in the United States increased from 92 in 1980 to an all-time high of 4,144 in 2015. This growth in the number and variety of breweries has been driven by the craft brewing industry and has provided consumers with a vastly increased array of choices.

States that allow self-distribution and do not enact beer franchise laws consistently have more breweries, creating more choices for consumers.

The growth in the craft beer industry has not been proportional across all states, however. While many factors influence the growth of craft breweries, regulations that restrict how brewers can sell their own beer have inhibited growth in many states and have limited consumer choices on the shelf and at the tap.

On top of this, beer franchise laws limit when brewers can terminate contracts with wholesalers. These laws have significant effects on the number of brewers and amount of craft beer produced. States that allow self-distribution and do not enact beer franchise laws consistently have more breweries, creating more choices for consumers.

The Three-Tier System and Self-Distribution

After the Twenty-First Amendment repealed Prohibition in 1933, each state implemented its own set of regulations for the alcoholic beverage industry. Most states established a three-tier system that mandates—to varying degrees in different states—separations of brewers (first tier), distributors or wholesalers (second tier), and retailers (third tier).

Craft brewers have long advocated for the legal right to distribute their own product.

Under the strictest form of this system, each tier must be independently owned and operated, and integration between tiers is not allowed, meaning brewers cannot sell directly to consumers or retailers. The economic term for this type of restriction is a “vertical restraint,” as it restricts how firms up and down the supply chain interact.

Many states have passed exceptions to these laws for small brewers that produce below a yearly limit, but these limits are often low and end up creating a disincentive to growth. Craft brewers that have the potential to outgrow the small-brewer exception, but do not want to be forced to work with wholesalers, might intentionally avoid expanding their operations beyond the distribution limit.

In fact, craft brewers have long advocated for the legal right to distribute their own product. For example, Red Oak Brewery, a craft brewery located in Whitsett, NC, has fought unsuccessfully against North Carolina’s distribution laws, which require a brewery to use wholesalers for all of its distribution if it produces more than 25,000 barrels of beer per year.

Many states have even more restrictive barrel limits than North Carolina, and 14 states do not allow any brewers, regardless of production volume, to distribute their own products.

These franchise laws have large economic and financial consequences for brewers stuck in contracts with wholesalers that are not performing well.

Beer franchise laws put legal restrictions on when a brewer can cancel, terminate, or fail to renew a contract with a wholesaler. A typical beer franchise law requires the brewer to demonstrate good cause, as defined in the law, before termination or nonrenewal of a contract is allowed. Some laws include further restrictions, such as granting the wholesaler an exclusive territory in which no other wholesaler can sell the contracted brands to retailers.

Almost all states have some form of beer franchise laws. In effect, these laws make it very difficult for a brewer to switch to a different wholesaler. Even if a brewer can demonstrate good cause, many laws provide another level of protection for wholesalers by requiring advanced notice and a period, often 60 or 90 days, in which the wholesaler is allowed to address the grievance before termination or nonrenewal is allowed.

These franchise laws have large economic and financial consequences for brewers stuck in contracts with wholesalers that are not performing well. One example of an expensive dispute between a brewer and wholesaler is that of Bell’s Brewery in Kalamazoo, MI, and its Chicago wholesaler, National Wine and Spirits (NWS). In 2006, NWS planned to sell the rights to distribute Bell’s brands to another wholesaler. Bell’s opposed the sale, worrying its products would be ignored by the new wholesaler.

Rather than engaging in a costly legal battle to end the wholesaler contract, Bell’s pulled distribution of its beer out of the entire state of Illinois, despite the Illinois market comprising over 10 percent of the brewery’s sales. Exiting the state was one of the few ways Bell’s could legally end its contract with NWS. Bell’s returned distribution to Illinois nearly two years later—after NWS lost its wholesale license and there was no longer a threat of a lawsuit.

A recent economic and statistical analysis of the data shows that approximately 58 to 76 percent of this difference can be explained by self-distribution laws. Production volume by craft brewers was also found to be 152 percent to 182 percent higher in states with no distribution restrictions. 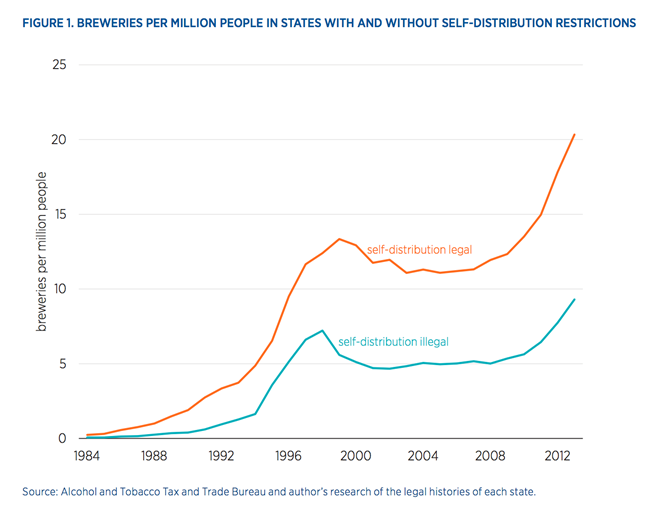 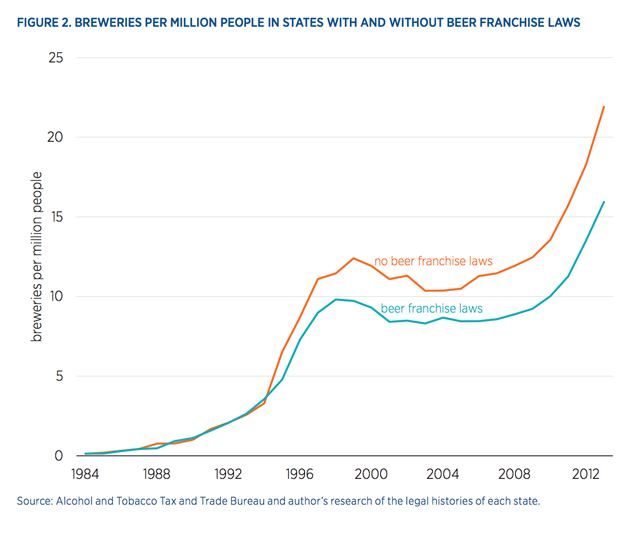 Why do beer franchise laws exist, and who benefits from them? Beer wholesalers claim these laws protect them and the market from larger breweries, such as AB InBev and MillerCoors, which might force wholesalers to limit market access to craft breweries. Thus, wholesalers argue that these laws protect consumer interests and improve brewer access to the market. Although large breweries could theoretically influence the supply chain in such a way, it does not make sense to apply these laws to restrict craft brewers that are unlikely to be large enough to cause similar concerns.

The evidence clearly shows that neither craft brewers nor consumers benefit from laws that limit the control brewers have over their growth or the distribution of their products.

Even still, the evidence is contrary to the claim that these restrictive laws protect consumer interests. California both allows self-distribution and has no beer franchise laws, and consumers suffer no dearth of brewery choice—the Brewers Association reports California had 518 breweries in 2015, the highest number in the United States. And California is just one example. States that give brewers more control over their own product consistently have more breweries, and consumers in those states have never had more choices.

In addition to the research described above, these types of vertical restraints have been studied in a variety of contexts and settings. In a recent survey of empirical studies investigating vertical restraints, economists Margaret Slade and Francine Lafontaine concluded, “When restraints and contract limitations are imposed on manufacturers via government intervention, often in response to dealer pressure due to perceptions of uneven bargaining power between manufacturers and dealers, the effect is typically to reduce consumer well-being as prices increase and service levels fall.”

The evidence clearly shows that neither craft brewers nor consumers benefit from laws that limit the control brewers have over their growth or the distribution of their products. To promote consumer choice in the brewing industry, regulations that restrict brewer control should be repealed or altered to put the control back in brewers’ hands.