In the US, the cancer death rate saw its sharpest one-year drop on record.

Though it is February 4, and therefore World Cancer Day, we have something to be very cheery about.

Cancer deaths are continuing to drop in every region of the world. A wonderful chart from Human Progress shows the story: 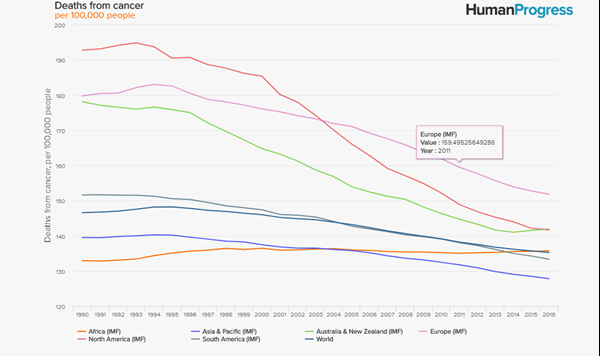 Many of us probably know a family member or friend who has battled or continues to battle cancer, and it’s never a fun ordeal. It doesn’t seem fair that some people have to fight the terrible disease, while others don’t. Yet, there is solace in knowing that advances in medicine and health care technology are improving the prospects for those mired in the fight.

In the US, the cancer death rate saw its sharpest one-year drop on record. From 2016 to 2017, the death rate dropped 2.2 percent, as reported by the American Cancer Society. Looking at the larger picture, since 1991 the death rate has dropped 29 percent, which means statistically there have been 2.9 million fewer cancer deaths than if the mortality rate remained constant. The larger part of this decline is due to a reduction in lung cancer deaths.

Experts report that some factors for the decline are advances in lung cancer treatment, a reduction in smoking rates, new therapies for skin melanoma, and advances in using the immune system to target tumors.

While those declines are cause for celebration, there has been some stagnation in breast, colon, and prostate cancer death rates. Breast and colon cancer rates are still falling, but at a slower rate than before, and prostate cancer death rates have stagnated. Rising obesity rates and other disparities could be contributing to this. Dr. Timothy Rebbeck, an epidemiologist at Harvard and the Dana-Farber Cancer Institute told The New York Times:

Studies have found that obesity, unhealthy diets and a lack of physical activity are associated with metabolic and hormone abnormalities and with chronic inflammation, which may help explain the link to cancer. Controlling these factors could help jump-start declines in cancer incidence and mortality rates once again.

This hopefully means that some of the stagnation can be mitigated by an increase in exercise and healthy diet choices, similar to lung cancer being mitigated by a decrease in smoking. (Sorry Taco Bell, but I actually want to “live más.”)

So even though it’s predicted that some 600,000 Americans will die from cancer per year and about 16.3 million worldwide, we must still keep the positive news of declining death rates before us. Let us rejoice in the fact that the world is getting better, that medicine and technology are improving our lives, and that we have more time with our loved ones because of these advances. On this #WorldCancerDay, let’s be thankful for that.