A local newspaper has an impressively detailed account of the California town’s labor market.

A couple of years ago, I praised federalism in part because state and local governments would be less likely to adopt bad policy (such as higher minimum wages) if they understood that jobs and investment could simply migrate to jurisdictions that didn’t adopt bad policy.

But “less likely” isn’t the same as “never.” Some state and local politicians can’t resist the temptation to raise taxes, even though that means workers “vote with their feet” for places with lower tax burdens.

And some state and local politicians continue to mandate higher minimum wages (see here, here, here, and here), even though that means workers have fewer job opportunities.

Today, we’re going to look at some fresh evidence from Emeryville, California.

The local newspaper has an impressively detailed look at what’s happened to the town’s labor market.

Representatives from the Mills College Lokey School presented data from its recent ‘business conditions’ survey to our City Council on Tuesday. The study confirmed what restaurant owners warned when the ordinance was hastily passed in 2015. They are struggling, rapidly raising menu prices and increasingly looking to leave. …It’s getting harder to find small food service businesses that were around in 2015 when the MWO was passed. Emeryville institution Bucci’s, Commonwealth, Farley’s, Scarlet City … all gone. In fact, nearly all the brick & mortar businesses that comprised the short-lived Little City Emeryville small business advocacy group have moved, folded or sold. …The survey also identified that “the restaurant industry is clearly struggling.” Specifically, small, independent, non-franchise establishments are having the most difficulty.

Here are some of the survey data on the negative effect. 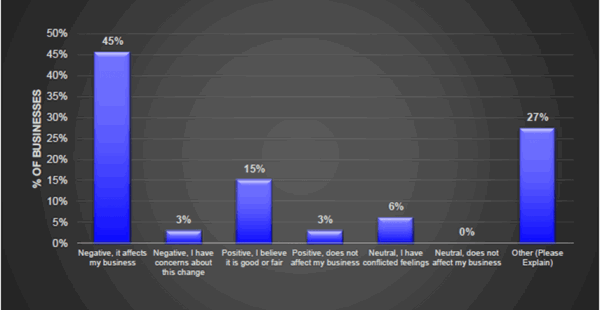 Here is some specific information on how restaurants have been adversely impacted.

One of the reasons for the economic damage is that Emeryville has gone further and faster in the wrong direction. 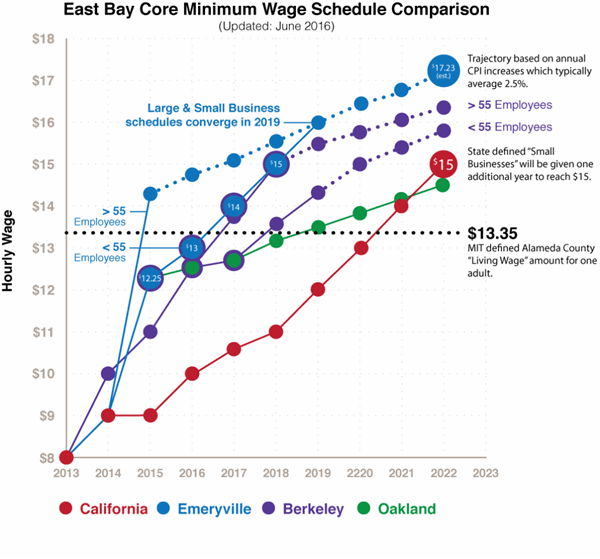 But it’s not just workers who are suffering.

Consumers are adversely impacted, as well.

One commenter, who identified herself as a resident, questioned why the survey did not include consumer data noting her dining frequency was altered by the drastic price increases she’s observed. …She noted that she used to frequent her local Doyle Street Cafe 2-3 times per month but last year went only twice. …Once franchise owner noted that the price increases they’ve been forced to pass along have ironically had the biggest impact on vulnerable communities that are more price-sensitive. “Our largest decrease in guests are folks over 50. Obviously our elderly, disabled, and folks on fixed incomes are unable increase their income to compensate for the price increases.”

Let’s close with a new video from Johan Norberg, which looks at the impact of minimum wage increases in San Diego.

P.P.S. A number of European nations have no mandated minimum wage. As explained in this video, that’s an approach we should copy.