Here are a couple of fresh examples of what happens when the beautiful language of the left, filled with "solidarity" and hope, crash lands in the real world. 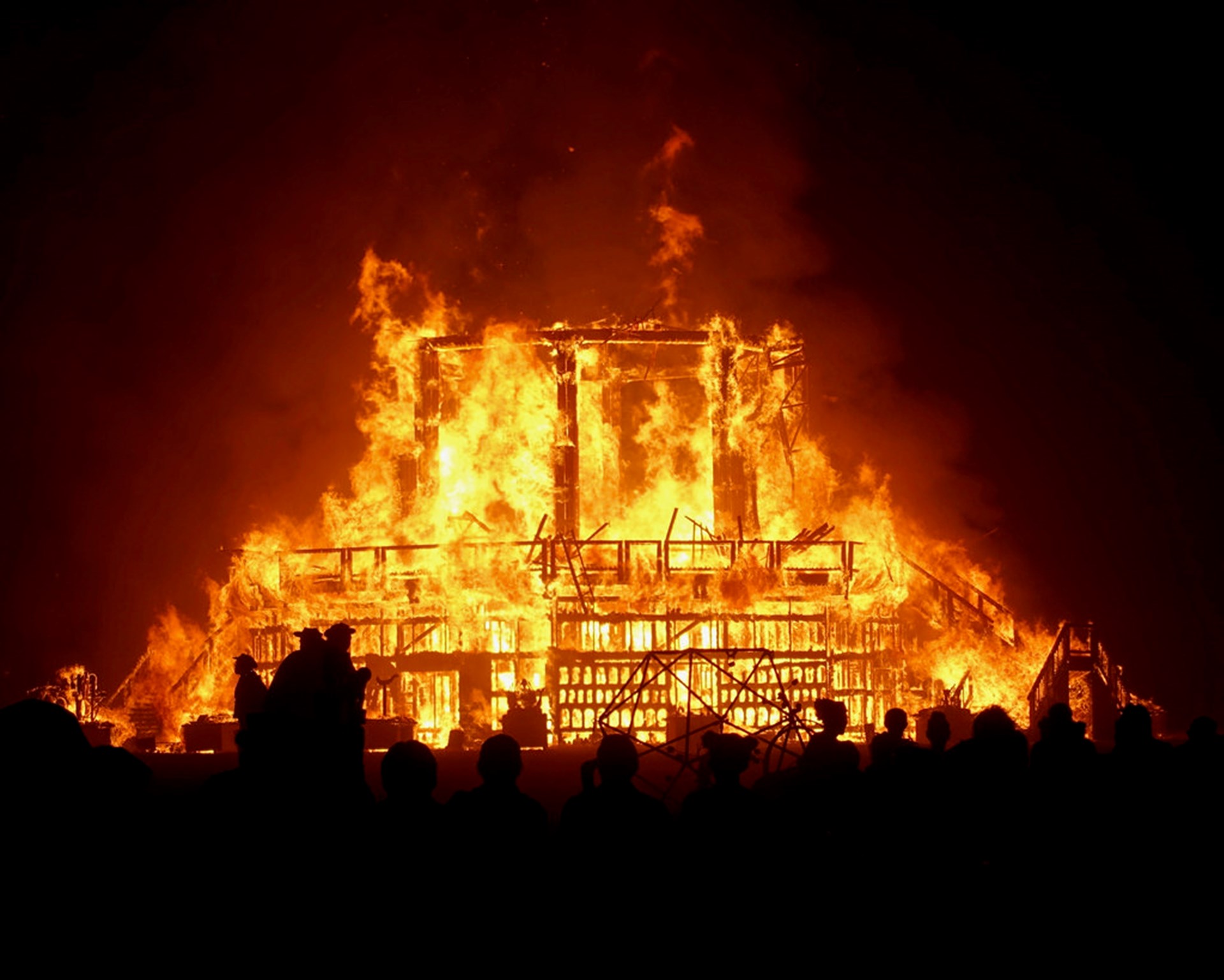 The Burning Man bonfire of 2017, courtesy of Steve Jurvetson via Flikr

It'd be nice if good intentions and kind words were enough, but they aren't. In the economy, as in nature, there are certain laws you cannot break without suffering the consequences. And one of the great tragedies of the left is that beneath the pink-colored language, there hides a dangerous mix of arrogance and failure that affects mostly those who are more vulnerable and replicates—or even surpasses—the worst vices of the same consumerism it criticizes.

Here are a couple of fresh examples of what happens when the beautiful language of the left, filled with "solidarity" and hope, crash lands in the real world—where it doesn't matter how inclusive, diverse, or progressive the mentality may be—where people are still people and where nature imposes its will, refusing to mercifully alter its laws in order to protect "ecological" endeavors.

The "Pants on Fire" of Burning Man

The first example is the festival known as Burning Man, which has grown from its humble beginnings in the mid-80s into one of the most significant cultural symbols of the bourgeoisie left, gathering more than 70,000 people every year, including Tesla´s Elon Musk and Amazon's Jeff Bezos. It even appeared in season 26 of The Simpsons in an episode titled "Blazed and Confused."

Burning Man attracts huge crowds to the temporary Black Rock City—built from scratch every year, literally in the middle of nowhere—for a week of art, music, and debauchery which comes to a grand finale by setting fire to a huge wooden human figure. In theory, Burning Man is a kind of window to a post-Christian, post-capitalist utopia where everyone is a kind pagan. The festival is built upon ten principles, including "decommodification," meaning a rejection of commercial transactions and consumption, opting instead for an "experience of participation" and giving as a superior form of coexistence, viewing the harsh sound of money with disdain. However, all that comes after you pay the $425 cost of the average ticket (some go as high as $1200), plus other $80 for a vehicle pass, which doesn't include any food or beverage but does result in a more substantial profit for the organizers.

In theory, Burning Man is a kind of window to a post-Christian, post-capitalist utopia where everyone is a kind pagan connecting with the spirituality of art and nature. The problem? Behind the goody costume, the festival has become an example of the same dreadful corporate practices its principles claim to reject.

The rumors about poor working conditions at Burning Man have been circulating around the Internet for some years, but it seems the situation is getting worse—so much that even some "lefties" are starting to become scandalized. A couple of months ago, Salon ran a solid story about the toxic environment, lousy working conditions, and unleashed hypocrisy at Burning Man, which has turned into a multimillion-dollar business—and we're not talking about millions of good wishes, but of shiny dollars.

The story blew the whistle about gender discrimination against women, mistreatment of the employees, and a startlingly high suicide rate.

In short, the people in the story blew the whistle about gender discrimination against women, mistreatment of the employees, and a startlingly high suicide rate (as much as ten times larger than that of the US Army) among the workers charged with building and maintaining the logistical structures that make the event possible.

Employees and volunteers, often for little or no pay (probably because, you know, "money is bad") work for months on end in the unmerciful Nevada desert to lay the electric lines and necessary equipment for the festival. They are also tasked with cleaning it all up afterward.

As Caleb Schaber, a full-time employee and later a volunteer at the festival (who eventually committed suicide) explained,

They don’t help out the workers that are injured, quite often, and they just try to get them to work for the most by giving them the least and then discard them.

Ricardo Romero concurs: "Over the years I just kept on seeing so many of my co-workers getting fired for complaining about worker treatment." Meanwhile, the managers are earning a pretty bourgeois $200,000 annually. Once again, they are paid not with warm hugs but in cold, hard cash.

A Moldy Home, Courtesy of Hollywood

The second example is the monumental fiasco of the "green" houses built by the “Make It Right Foundation,” a so-called charity organization backed by the actor Brad Pitt. The homes were built in the aftermath of Hurricane Katrina, but they're—again—literally falling apart a mere eight years after they were delivered.

The residents also complain about gas leaks and denounce that the houses "were built too quickly, with low-quality materials."

Back in the day, the foundation bragged about the homes, calling them "affordable, high-quality, environmentally sustainable," and safe, of course. Many victims fell for the fantasy and paid as much as $130,000 for houses they've since had to abandon because they're "rotting and dangerous," residents recently told NBC News. Some structures are collapsing, while floors, walls, and ceilings have been invaded by mold. All very ecological, though.

According to NBC—which, like Salon, is not a conservative or pro-capitalist outlet by any stretch of the imagination—the residents also complain about gas leaks and denounce that the houses "were built too quickly, with low-quality materials, and that the designs didn’t take into account New Orleans’ humid, rainy climate."

And the Make It Right Foundation? It virtually disappeared years ago.

When the Left's Fantasyland Crashes, the Poor Are Left Worse Off

Once again, when the goody fantasies of the bourgeoisie left crash headfirst with reality, the damage is horrifying. When the flames of the Burning Man go out and the cameras of Brad Pitt's—or any celebrity's—PR team go away, the people on the ground are left facing a situation even worse than before. All the while, on the other side of town, their so-called "benefactors" drink good champagne and make "good conscience" toasts to condemn "evil" capitalism—with the third bottle of Patron on the one hand and the fifth of Dom Perignon on the other.

And for everyone else? Only smoke and mold.

Gerardo Garibay Camarena is a Mexican writer and political analyst with experience in the private and public sector. He the author of two books – Sin Medias Tintas and López, Carter, Reagan – and a weekly columnist for many online news organizations.