The Battle of Bretton Woods: John Maynard Keynes, Harry Dexter White, and the Making of a New World Order 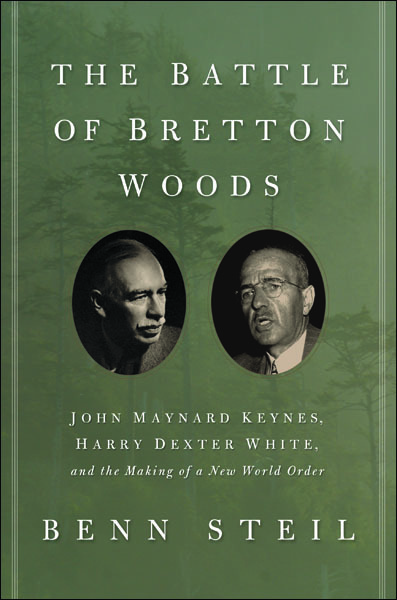 As I made my way to Porcfest this past June, I passed Bretton Woods—the birthplace of what many might consider the antithesis of the Bitcoin-trading, freedom-loving event.

The coincidences didn’t stop there: I had just started reading Benn Steil’s The Battle of Bretton Woods: John Maynard Keynes, Harry Dexter White, and the Making of a New World Order.

As World War II raged on in Europe, representatives from the Allied nations met at the Bretton Woods conference to establish rules and procedures to regulate international monetary affairs. The conference established the International Monetary Fund (IMF) and the World Bank.

A few days after first passing the site, I was invited to inspect the Mount Washington Hotel, where monetary history was made. The hotel and surroundings are amazing. “The majestic beauty of the surroundings,” Steil quotes a New York Times correspondent writing in 1944, is “in striking contrast to the temporary bedlam which broke out on this plateau in the shadow of Mount Washington.”

Steil writes the hotel had “by legend been routinely haunted by ghosts,” and as I strolled the halls alone, I too had the sense that I was not alone. As the author points out, the resort itself would have been a ghost if not for the Bretton Woods conference, which had been teetering on the edge of bankruptcy until the famous gathering “brought it back to life.”

My visit helped place Bretton Woods in the real world. Steil’s book does much the same thing. Individual persons are at the center of the story, which also comes loaded with tales of international intrigue, spycraft, and famous personalities. It’s not just for history buffs and economics geeks.

For example, a former prima ballerina, Lydia Lopokova, swam daily in the frigid waters of the Ammonoosuc River, which runs next to the hotel. At night she danced in her room, precluding sleep for the occupant of the room below her, Treasury Secretary Henry Morgenthau, Jr. No one took offense, though: She was married to John Maynard Keynes.

Speaking of Morgenthau, he made himself conference president, delivered the opening address, and vowed not to let the “slick-tongued, aristocratic bamboozler—Lord Keynes” “near the podium on the opening day.” The Treasury secretary’s speech was framed in talk of war and peace, warning that competitive currency depreciation was an economic weapon that, if used, “can have no other offspring than war. It is dangerous as it is futile.”

Meanwhile Keynes sought to keep the United States contingent from supplanting Britain’s trade access, with its colonies and dominions, with an American advantage that would make Britain wholly dependent on the United States forever.

Harry Dexter White features prominently in the Bretton Woods story. In his childhood, he was described as nervous and shy. As an economist, he was a tinkerer who looked “for the dials government might fiddle with.” Later, Steil writes, “White was anxious to get his own hands on the dials.” He sought to combine the gold standard with a national monetary standard while avoiding the disadvantages of both.

The story really gets interesting when the author relates White’s relationship with double agent Whittaker Chambers. As White spied for the Russians in the late 1930s, his role with the U.S. government continued to expand. In their meetings, White annoyed Chambers with his constant chatter about monetary matters. However, White was no Marxist. Steil describes his economics as Keynesian and his politics as “mainstream New Deal Progressive.”

White didn’t receive cash from the Soviets. He was sent rugs and other items. Steil relates a hilarious story of a D.C. carpenter named Harry White mysteriously receiving cases of caviar and vodka until the intended recipient tracked the goodies down.

The conference dragged on for three weeks, its 730 delegates (from 44 nations) and 70 members of the press corps overflowing the resort grounds and filling hotels miles away. In the end, the Articles of Agreement were drafted, and a year and a half later, ratified. In March 1947, the International Monetary Fund began operations.

Morgenthau's farewell remarks stated the establishment of the IMF and the World Bank meant the end of economic nationalism. Bretton Woods was to lower trade barriers and facilitate capital flows.

However, as economist Henry Hazlitt had constantly predicted in his New York Times column, world monetary affairs quickly began to unravel under Bretton Woods. Indeed, when the conference opened on July 1, Hazlitt wrote, “it would be impossible to imagine a more difficult time for individual nations to decide at what level they can fix and stabilize their national currency unit.”

First there was inflation in 1946 and the Sterling crisis the following year. Britain devalued the pound 30 percent in 1949, and 30 countries eventually followed the U.K.'s example. In September 1963, Charles de Gaulle ordered the Bank of France to demand that 80 percent of the balance of payments owed them by the United States be made in gold. The French president was no economist; he had been schooled by Bretton Woods critic Jacques Rueff.

In 1961 and 1969, the Deutsche mark was revalued, and in August 1971, Bretton Woods was finished for good when Richard Nixon closed the gold window. Only an hour’s notice was given, “a clear breach of American IMF obligations.”

The deeply indebted modern America has had the benefit of paying its bills in currency it freely creates. This system can’t last forever. As the author explains, there could be a gentle transition from the dollar standard, but more likely, the shifting away will be “disruptive and damaging.”

Thirty years after Bretton Woods, in his Nobel acceptance speech, F. A. Hayek said, echoing Hazlitt, "If man is not to do more harm than good in his efforts to improve the social order, he will have to learn that in this, as in all other fields where essential complexity of an organized kind prevails, he cannot acquire the full knowledge which would make mastery of the events possible.”

The lesson has never been learned. The world remains saddled with the World Bank and IMF.

However, books like Steil’s could help a new generation understand its limitations.