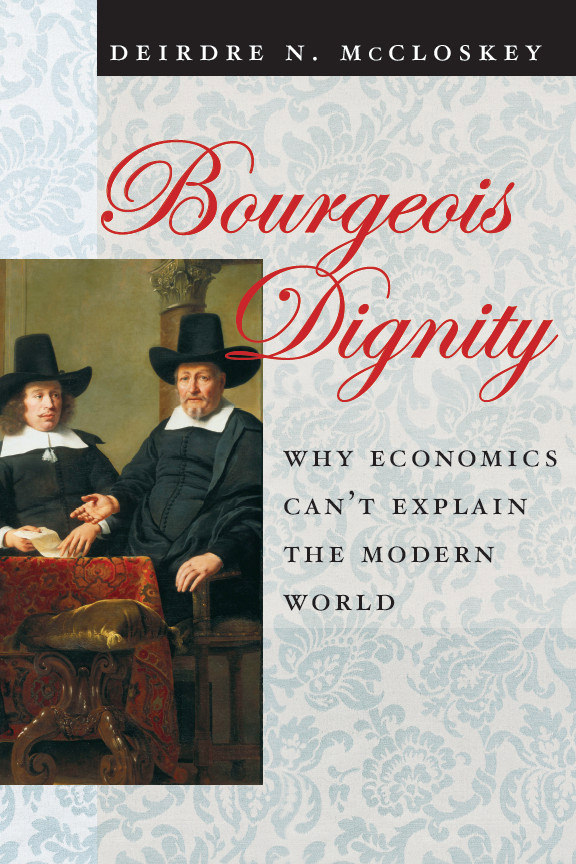 Deirdre McCloskey’s second installment in her “bourgeois” series tackles the question in her subtitle: Why economists can’t explain the modern world. She first reviews major explanations for modern economic growth (beginning with the Industrial Revolution) that have been floated in the work of other economic historians, including trade-as-an-engine, imperialism and slavery, commercialism, Darwinian struggles, and institutions. None of those quite gets it right, she argues.

The alternative McCloskey posits forms the core of her book. According to McCloskey, the association of “dignity” with commerce and commercial endeavors is the primary reason for the extraordinary economic growth that has occurred in the West since roughly 1800. That is to say, there was a general change in attitudes (beginning in Holland and England in the seventeenth century) toward business activities. Whereas they had been widely regarded as “undignified” before, people came to see commerce as not merely a tolerable occupation, but a dignified one. That change in attitudes was the catalyst that began the Industrial Revolution.

Just as Adam Smith wrote first about moral sentiments and the desire for well-deserved praise in 1759, before writing about the wealth of nations in 1776, so too in McCloskey’s analysis: Dignity preceded and material wealth followed. It was not merely “discovery” and “creativity” (although those were important) that brought about the tremendous growth in production and trade, but discovery and creativity “supported by novel words—words that have nothing to do with utility maximization problems. What I am claiming here,” she writes, “is that discovery and creativity depended also on other virtues, in particular on Courage and Hope.” McCloskey tells a story of interrelated steps in which the bourgeois virtues, supported by “commercial Courage and Hope,” disrupted old routines and gave rise to new inputs, new practices, and new goods and services. No other economic model explains the disruption and the magnitude of the wealth creation that followed.

Hers is an enormously optimistic telling, filled with rhetorically powerful examples and sweeping reminders about just how lucky we are. Notwithstanding the economic and financial turmoil of the past four years, which have led most recently to protests in New York City, the message is that we are rich—really rich—compared to our ancestors of only a short time ago. McCloskey writes, “What was different after 1800, and with unstoppable force after 1900, was a novel and immense and sustained, almost lunatic, regime of innovation, finally breaking the Malthusian curse.” Economic well-being had remained approximately the same for centuries, and then, suddenly, unprecedented economic growth occurred after 1800, raising incomes by a factor of “ten or sixteen or higher.”

McCloskey’s is a highly original account. Not only does she find a new and plausible explanation for hitherto unexplained economic growth, but she also reminds economists (and all of us who take an interest in levels of and improvements in human prosperity) that talk is important. It was free and unencumbered talk that elevated the dignity of commerce and caused the rush to modern levels of prosperity and well-being. The spillover effects were enormous, and they were more than strictly economic, including “commercial prudence and family love” as well as “an almost insane inventive courage fueled by hope.” Moreover, the working classes, “ancestors of all the rest of us,” came to “partake of the citizenly, bourgeois dignity of a vote, a house, a car, an education,” and became the “‘gentlemanly’ middle class.” In short we have enjoyed immense social and economic change because some people in northwestern Europe decided that those who engaged in commerce were actually good people.

McCloskey finishes her story with some important speculations. She asks the question that comes to mind as YouTube offers videos of the protesters in New York City and elsewhere who are disenchanted with bourgeois virtues and markets: Is it possible that “losing the ideology” of bourgeois dignity “can lose the modern world?” (McCloskey, incidentally, sees dangers to liberty on both sides of the political spectrum.) Her answer to staving off the attacks on free-market capitalism and bourgeois dignity lies in “a new, more idea-oriented economics, which would admit, for example, that language shapes an economy.”

That is well put. Some of us see economics as a set of ideas—new or old—that require attention and discussion before we can ascertain which ones deserve to survive. In this work, the second in a planned six-volume project, McCloskey continues her crusade for a new sort of economics, an economics that takes us back to Adam Smith’s preoccupations with approbation, generosity, and ethics. And the all-important: talk.

Sandra Peart ([email protected]) is dean of the Jepson School of Leadership Studies at the University of Richmond.

Deirdre Nansen McCloskey taught at the University of Illinois at Chicago from 2000 to 2015 in economics, history, English, and communication. A well-known economist and historian and rhetorician, she has written 17 books and around 400 scholarly pieces on topics ranging from technical economics and statistical theory to transgender advocacy and the ethics of the bourgeois virtues. Her latest book, out in January 2016 from the University of Chicago Press—Bourgeois Equality: How Ideas, Not Capital or Institutions, Enriched the World—argues for an “ideational” explanation for the Great Enrichment 1800 to the present.