Bieber Has Boosted Puerto Rico More than Statehood Ever Would

Tourism has risen 45% since Despacito became a global sensation.

Puerto Rico is Spanish for “rich port,” but its people have not felt particularly wealthy lately. Just two months ago, Ricardo Rosselló, the governor of the U.S. territory filed for the largest municipal bankruptcy in American history. Surpassing even Detroit’s head-spinning $18 billion in debts, Puerto Rico owes its debtors $74 billion with another $50 billion in pension obligations.

The situation is so dire, the territory even voted in favor of becoming America’s 51st state just last month specifically for financial reasons. Governor Rosselló referred to this vote as a “historic election” and expressed that, "Today, we the people of Puerto Rico, are sending a strong and clear message to the world claiming our equal rights as American citizens.”

While the prospect of officially becoming a state was overwhelmingly supported by the island’s residents, Congress is the only entity that can make the final decision when it comes to admitting new states into the union. And given the massive financial strain that Puerto Rico is currently experiencing, it is not particularly attractive as a potential new state.

But as the government of Puerto Rico continues to seek some sort of bailout from the US government, the Puerto Rican economy has received a big boost from an unexpected source: Justin Bieber.

As a territory, Puerto Rico has a unique relationship to the United States. While it is still bound to follow many of its policies, the residents are not actually entitled to vote even though many of these policies gravely impact their economy.

The Jones Act, for example, was passed in 1917 and has had a negative impact on the Puerto Rican economy. By mandating that the residents of the island territory are required to purchase all goods only from American-made vessels who hire only American crews to operate their cargo ships, the Jones Act has put a damper on Puerto Rican-based businesses by price gouging consumers.

In addition to limiting who Puerto Ricans are legally allowed to do business with, the U.S. minimum wage policies have had devastating consequences. As a result, Puerto Rico has been in a major recession for a decade now and is suffering from high unemployment rates currently around 11.5 percent.

The odds are high that you have heard the song Despacito over the last few months.

When minimum wage requirements are made at the city or state level, the losses experienced from high unemployment rates are offset in the local economy, since many who are unable to find work often relocate to an area where the minimum wage isn’t as restrictive.

And while Puerto Rico has seen a 10 percent decrease in its own population as many residents made the move to the United States in search of better job opportunities during the economic downturn, for many Puerto Ricans relocation is not as easy as it is for residents in the continental states. Without the flexibility and means to relocate, the economic catastrophe that resulted from the 2007 minimum wage increase was felt more intensely.

While asking the U.S. for financial assistance may have seemed like the simplest solution for Puerto Rico, a sizeable boost in the economy has come from an unexpected place.

"This Is How We Do It down in Puerto Rico"

After spending eight weeks on the Hot 100 Chart, the song “Despacito,” performed by Justin Bieber and Puerto Rican musicians Luis Fonsi and Daddy Yankee, is officially in the running for Billboard’s “Song of the Summer.”

Tourism has increased 45 percent since the song became a worldwide success.

Unless you have taken extreme precautions in order to avoid it, the odds are high that you have heard the song Despacito at least a few times over the last few months. In fact, one need only spend an evening out at a bar or a club to observe the effect this song has had on music consumers.

As soon as the song’s opening flamenco guitar riffs begin playing, gasps of excitement can be heard spreading like wildfire throughout any given venue. Even though many of the song’s American fans can’t even understand the Spanish lyrics, it hasn’t stopped them from attempting to sing along anyway.

Within the few months of being released, the song has garnered over 200 million views on YouTube. While originally the song was performed without Justin Bieber’s bilingual lyrics, after the pop star gave the song an American twist, English-speaking consumers became enticed to visit the island represented in the song.

But it’s not just Americans who are flocking to the island of Puerto Rico in response to the hit song. According to the publication Un Nuevo Dia, tourism has increased 45 percent since the song became a worldwide success. And the Central American travel agency COCHA reported that it altered many of its tours to included highlights from the filming of the Despacito music video in response to consumer demand. The Club La Factoría in Old San Juan, for example, was the backdrop for several scenes in the video and has since become a highlight for travelers touring the island’s landmarks and stimulating the local economy.

Despacito's impact on the Puerto Rican economy has shown the power of market demand.

This tourism boom has been directly attributed to the line of the song, “This is how we do it down in Puerto Rico.” The Puerto Rican pride combined with the music video’s breathtaking images have done more to bring financial independence to the struggling territory than its relationship with the United States ever could, especially when considering that it is U.S. policies that served as a catalyst for Puerto Rico’s 11-year recession.

As devastating as American policies have been for the Puerto Rican economy, the small island still seems to be convinced that a more solidified relationship with America is the answer.

However, as pop culture has always impacted tourism, Puerto Rico has been given the opportunity to truly assert its financial independence from the United States by showcasing its own rich native culture.

Despacito isn't alone in helping make the island a must-see tourist spot this summer. There's also the success of the Broadway musical Hamilton, whose creator was heavily influenced by his family’s Puerto Rican roots. The original Broadway cast, which featured others of Puerto Rican descent even wove a Puerto Rican flag during its Tony acceptance speech for Best Musical in 2016, putting Puerto Rico on the map.

While these two instances of pop culture serving as economic catalysts are not enough to wipe out the debt that Puerto Rico has accumulated, it is a demonstration of the power of market demand. By creating a good that people want to consume, Puerto Rico has laid the foundations creating its own independent economy, free from interference from the United States government.

The proof of this phenomenon continues to be evident with the success of Despacito. In fact, Daddy Yankee even made history this summer by becoming the first Latin music artist to hit number one on Spotify’s charts.

Rather than focusing their attention on a further relationship with the United States, Puerto Rico would be wise to try a little distance, and continue to encourage and hone in on local talents, goods, and services that can be exported to America and the rest of the world, creating an appeal in the international marketplace.

Upon hearing the news of Puerto Rico’s tourism boom, Luis Fonsi took to his Instagram account saying, "What a joy it is to read this in international media. Puerto Rico is the true protagonist of this song and this video.” 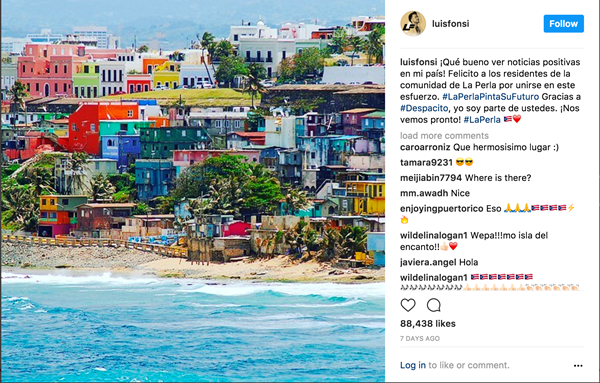