Being a Jerk at Work is a Human Right, Says Labor Board

The National Labor Relations Board (NLRB) recently told T-Mobile that its policy against workplace incivility is illegal. Nope, say the bureaucrats: workers have a right to be surly on the company dime.

The Huffington Post crowed about the ruling in a recent post. The article’s title, “Your Employer Can’t Force You To Be Happy,” betrays a fundamental misunderstanding of the meaning of “force.” The only one employing force in this situation is the NLRB. The only victim of force is T-Mobile. If T-Mobile refuses to comply with the administrative law judge’s order, eventually men with guns would come and haul its executives off to jail.

You Keep Using that Word

For the record, neither T-Mobile nor any employer uses men with guns to compel people to continue working for them. The confusion here stems from a flawed colloquial use of the word “force.” The situation called life requires that we eat, which in turn requires that we work to earn an income to acquire food. That darn Mother Nature forcing us to work! By the same token, if your attitude puts you in a situation where you can’t easily find another job, then that makes your employer the bad guy. Apparently anything asked in pursuit of maintaining that job is a use of force against you.

These are not monstrous expectations.

The employer-employee relationship should be an entirely voluntary one. To the extent that is untrue today is almost universally to the detriment of the employer. Employer rights (that is, the natural right to form mutually agreeable contracts) are severely restricted by an avalanche of labor laws, rules, and regulations.

Rules run the gamut from merely annoying (pay frequency standards) to debilitating (lawsuit risks when firing someone for performance reasons because they happen to be a member of a “protected class”). Somewhere in between is the difficult task of setting even basic conduct standards for employee behavior because of the intractable minefield that is the National Labor Relations Act.

The NRLA guarantees to all employees (irrespective of union membership status) certain “rights,” chief among these being the right to engage in any and all behavior that is conducive toward forming or joining a union. Anything that could remotely be construed to restrict this right is verboten and can earn the employer the label of “criminal”.

Even a rule as simple as stipulating that company resources can only be used for company business is disallowed on the grounds that employees have a right to use company resources to communicate with each other about working conditions. Apparently suggesting employees communicate after hours and using their own e-mail accounts or photocopiers is simply too much of a burden. I mean, who has access to phone service or printers at their house these days?

Government has given an official imprimatur to poor customer service.

The recent NRLB ruling similarly struck down several provisions of T-Mobile’s employee handbook that it viewed as being too restrictive with respect to employees’ organizational rights. Among these included a rule “prohibiting employees from arguing with co-workers, subordinates, or supervisors; failing to treat others with respect; or failing to demonstrate appropriate teamwork” as well as requiring employees to “maintain a positive work environment by communicating in a manner that is conducive to effective working relationships with internal and external customers, clients, co-workers, and management.”

These are not monstrous expectations. People actually want to work in places where management discourages acting like a jerk.

The head-splitting logic employed by the NLRB “judge” is as follows. If an employee is unhappy about work conditions, he or she has the right to externalize that unhappiness to co-workers and customers.

The Right to Treat Customers Poorly?

Being “forced” to cover up unhappiness, in this view, would be tantamount to disallowing their right to free expression of their anxiety over work conditions. This raises the question: what if the employee woke up on the wrong side of the bed? This has nothing to do with working conditions. Surely that is not a protected activity. How are we to differentiate the two?

Government has given an official imprimatur to poor customer service. In a way it makes sense. Government workers are infamous for their ill tempers (think the DMV). But if bureaucrats are able to propagate their own sullen attitudes toward work and service throughout the private sector, they won’t look so bad in comparison.

There is an old workplace humor poster that stated, “Sometimes the best solution to morale problems is just to fire all of the unhappy people.” Let’s start with the scowling faces in government before they make us all as miserable as they are. 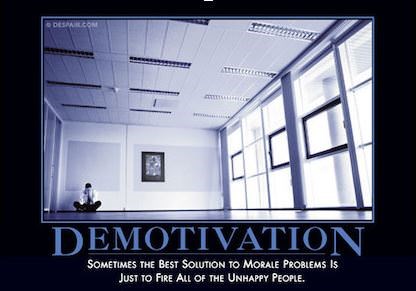 Greg Morin is the CEO of Seachem Laboratories which manufactures equipment and chemicals used in the maintenance of saltwater and freshwater aquariums. He holds a PhD in chemistry from the University of Notre Dame and maintains a personal blog at gregmorin.com .