Despite media headlines to the contrary, there was little doubt that Sweden’s economy would be less damaged in the absence of COVID-19 lockdowns.

In July, The New York Times claimed that Sweden had made a grave mistake by not imposing a government lockdown as other nations did.

“[Sweden’s] decision to carry on in the face of the pandemic has yielded a surge of deaths without sparing its economy from damage — a red flag as the United States and Britain move to lift lockdowns,” the Grey Lady reported.

Similar claims were made by numerous other media outlets, including Politico and Financial Times, which stated Sweden was “unlikely to feel economic benefit” of its no-lockdown approach.

The drumbeat from the press presented a clear message: Sweden would suffer the same economic turmoil as everyone else despite its dangerous laissez-faire approach to COVID-19.

Preliminary data for the EU’s second quarter are telling a different story, the BBC recently observed.

While Europe plunged into a deep recession, Sweden did not.

In contrast to other European nations, Sweden’s economy actually grew slightly in the first quarter; and while second quarter results are less positive, they also nevertheless show that Sweden is an economic outlier.

While no nation has emerged unscathed from the coronavirus crisis, which has resulted in hundreds of millions of job losses and millions of business closures following widespread government-imposed shutdowns, data show the Swedish economy has been hit much less than the rest of Europe.

Legacy media have repeatedly reported that Sweden is not escaping the economic carnage brought by #COVID19 even though it didn't lockdown.

But it's also true that #Sweden has suffered far less economic damage than other European nations. pic.twitter.com/YPTiJIymBr

While Sweden saw a historic economic contraction in the second quarter, the 8.6 percent decline was less than half that of the United Kingdom (-19.1 percent) and Spain (-18.5). By the way, Sweden has also suffered fewer COVID-19 deaths per capita than both Spain and the UK, even though both Spain and the UK had strict government lockdowns.

Overall, the EU saw an 11.9 percent GDP drop in the second quarter, about 40 percent higher than that of Sweden.

"It is, as expected, a dramatic downturn,” Nordea bank chief analyst Torbjorn Isaksson told the BBC. “But compared to other countries, [Sweden’s economy] is considerably better, for instance, if you compare to southern Europe." 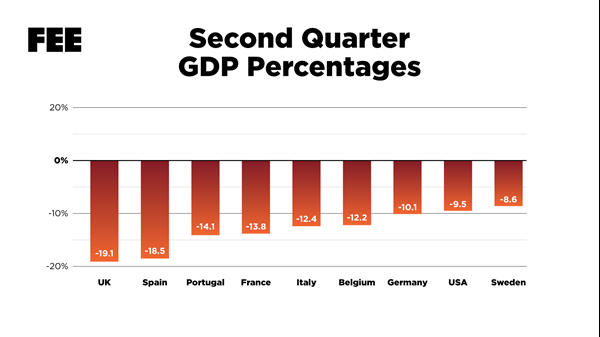 For months, critics of Sweden’s strategy had claimed the Swedes’ softer approach was for naught. Despite its policies of encouraging social distancing mostly through voluntary action, projections still showed the nation’s GDP was expected to decline 7-10 percent in 2020.

Of course it was never a question if Sweden’s economy would suffer. It’s a nation heavily dependent on exports, and a decrease in global demand was going to lead to economic fallout regardless of what Swedish leaders did. The question was how much would its economy be harmed.

Two quarters of data have emerged now, and it’s clear that Sweden’s “lighter touch” policies have resulted in far less economic damage than its European counterparts.

Indeed, a recent report from Capital Economics, an economic research firm based in London, concludes that Sweden’s economy is the least damaged in Europe, the "best of a bad bunch.

"The Swedish economy has weathered Covid well, thanks in part to the government's light-touch lockdown, and our forecast of a 1.5% drop in GDP this year is well above consensus," wrote economists Andrew Kenningham, David Oxley, and Melanie Debono.

A 1.5 percent annual decline is far more optimistic than what analysts predicted months ago and better than what most analysts today believe, but Sweden’s economy has been outperforming expectations since its strategy was announced.

GDP is only half the story, however. Perhaps more importantly, Sweden’s strategy has shown human society can still function in the presence of the coronavirus, despite the apocalyptic warnings from modelers and media.

While modelers predicted 96,000 Swedes would die by July as a result of its policy, as of mid-August the figure stands at less than 5,800, a higher per capita total than neighbors such as Finland, Norway, and Denmark but superior to Belgium, Italy, and others. COVID-19 case numbers continue to fall. Deaths and hospitalizations have flatlined, and reports indicate Stockholm is on the verge of herd immunity.

It increasingly appears that Sweden, the maligned outlier, got the virus right.

Instead of ordering humans confined in their homes, Swedes allowed schools to remain open and groups to congregate in parks, pools, restaurants, and bars. Not only did Sweden avoid much of the economic carnage and the unintended social consequences of lockdowns—increases in drug overdoses, domestic abuse, suicide, and social unrest—their strategy appears to have tamed the virus, unlike so many other nations around the globe who are seeing new waves of COVID-19.

Many experts may be loath to admit it, but Sweden’s strategy increasingly appears to be both economically sound and scientifically sound.

“The pandemic will not be over until we reach herd immunity, either through a vaccine or through natural infections,” Martin Kulldorff, professor of medicine at Harvard Medical School, recently wrote in The Spectator. “Herd immunity is not a strategy but a proven scientific phenomenon, and to deny that is as silly as denying gravity.”

That is a debate for the virologists, however. The economics are more clear.

Despite media headlines to the contrary, there was little doubt that Sweden’s economy would be less damaged in the absence of lockdowns. Economic prosperity depends on laissez-faire, and lockdowns are the antithesis of the idea, which literally means “allow to do.”

A few months ago, the entrepreneur Elon Musk pointed out a basic lockdown reality.

By not initiating a lockdown, Sweden was able to make “more stuff,” which essentially is what GDP comes down to: more stuff.

Sweden, a relatively free market economy that often is mischaracterized as socialist country, has done the world a service by showing laissez-faire works both for public health and economic growth.

America and other countries seeking to rebound from the pandemic would do well to pay attention.