To become a billionaire in a free market system, one must create a lot of value for others.

Well you didn't make those widgets, did you? Because you employed thousands of people and paid them less than a living wage to make those widgets for you. You didn’t make those widgets, you sat on a couch while thousands of people were paid modern-day slave wages. And in some cases, (...) real modern-day slavery, depending on where you are in terms of food production. You made that money off the backs of undocumented people, (...) black and brown people being paid under a living wage, (...) single mothers and all these people who are literally dying because they can’t afford to live. And so, no one ever makes a billion dollars. You take a billion dollars.

OK, let’s just dive right into this. To set the stage, Rep. Ocasio-Cortez was answering the sort of question I would have asked if given the chance.

AOC’s response was rambling, but I think she deserves credit for giving a bold response to a reasonable question. Alas, I think most of what she said is wrong.

Jeff Bezos, founder and CEO of Amazon, is the world’s richest man. He has also been accused by Rep. Ocasio-Cortez of paying “starvation wages.” So let’s use him as the poster child of evil businessmen.

According to Payscale.com the average salary at Amazon is $16.02/hr. That’s more than twice the federal minimum wage of $7.25 per hour. It even exceeds the $15/hr minimum wage recently passed by the House of Representatives.

And they’ve been at it for a long time.

In his 1904 book The Principles of Economics, economist Frank Fetter answers these same arguments:

The wage system is a favorite object of attack for radical social reformers. It has many unlovely features and there are many individual cases of hardship. It may well be asked, What method shall be pursued to reform it? Its retention, however, is not inconsistent with very great changes in the present political and economic arrangements. The impersonal economic forces are working for improvement.

The average wage in 1904 was $0.22/hr. Adjusted for inflation that’s $6.38/hr. Consider further that nearly half the world today lives on less than $5.50 a day. This seems much closer to “starvation wages” and is much more representative of the historical condition of mankind. Our present relative prosperity is an anomaly, and we ought not destroy what we’ve got trying to immanentize the eschaton.

These are not “starvation wages,” and as the graph below shows, Amazon is not an exception.

How do some of the United States’ other richest people stack up? 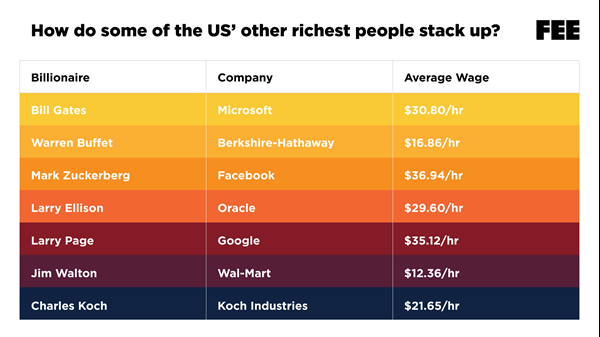 “People...Are Dying Because They Literally Can’t Afford to Live”

AOC claims “black and brown people being paid under a living wage, (...) single mothers and all these people are literally dying because they can’t afford to live.”

Human Progress has already examined a similar statement by Rep. Ocasio-Cortez. To make a long story short, food has become much more affordable since 1919. For example, 100 years of capitalism “allow(s) the unskilled laborer today to purchase 24 times as many eggs as an unskilled laborer was able to purchase for the same amount of work a century ago.”

Would Widget Inc. employees be more prosperous if the company didn’t exist? In a free market, individual people accept employment at their own discretion. Anyone who works for Widgets Inc. must believe that it is a better job than any of the other options presently available to them. If there were no Widgets Inc., there would be one less choice in the pool of potential employment. There would also be less choice for consumers of widgets.

The total amount of wealth in a society is not static. It is not true that for someone to get more, someone else must get less. Entrepreneurs earn profits by providing goods or services that people value enough to voluntarily purchase. This makes both the buyer and seller richer.

To become a billionaire in a free market system, one must create a lot of value for others.

“No One Ever Makes a Billion Dollars"

This is reminiscent of Barack Obama’s famous (or infamous) "you didn’t build that" speech. During that speech, the President said “the point is, is that when we succeed, we succeed because of our individual initiative, but also because we do things together.” He was correct.

Let’s work backwards from Amazon, Google and the other big tech companies of today. Those companies could not exist if it weren’t for the work of people like Bill Gates and Steve Jobs to make computers widely available and accessible to the public. And while they may have advanced computer technology, they didn’t invent computers. And the early pioneers of computers couldn’t have existed if not for people in many other industries providing the raw materials of computer manufacturing.

And so it goes, the progress of our civilization driven by the invisible interplay of millions of individual acts of initiative. No individual or board of central planners could ever have charted the course that created our modern world.

And yet President Obama, Rep. Ocasio-Cortez, and many others insist on demeaning the value of individual initiative. They insist on advocating policies which would remove the incentives of entrepreneurship.

Lest forget, entrepreneurship is risky. Jeff Bezos quit his job and got $300,000 from his parents to build Amazon. Bill Gates and Mark Zuckerberg dropped out of college to build Microsoft and Facebook, respectively. After Michael Bloomberg was fired from his job at an investment bank he used the $10 million in equity he had to start his company. Larry Page got a $1 million loan from friends and family to grow Google.

Why would anyone take these sorts of risks without the potential for reward?

“You Take a Billion Dollars”

It isn’t stealing when people voluntarily give you something in exchange for something else.

There is, however, an organization which uses force and coercion to take property from some people and give it to other people. That organization is, of course, the state.

The best way for the well-connected to exploit others is to have the government subsidize (or even bail out) their companies and stifle their competition. We should not be empowering the state to reward its cronies. We should be celebrating the way the market incentivizes and rewards innovators and allows us to choose who we do business with.

Kody Jensen is a millennial who enjoys economics and chess. Some of his favorite writers are Frédéric Bastiat, Henry Hazlitt, and Frank Albert Fetter.