Another Case for Abolishing the Fed

The central bank is neither helpful nor necessary 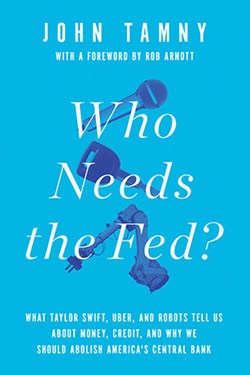 John Tamny specializes in using popular culture to illustrate economic wisdom. He succeeded mightily with his book Popular Economics: What the Rolling Stones, Downton Abbey, and LeBron James Can Teach You About Economics. His new book poses the provocative question, Who Needs the Fed?: What Taylor Swift, Uber, and Robots Tell Us About Money, Credit, and Why We Should Abolish America’s Central Bank.

Tamny celebrates many aspects of the Austrian School, and proclaims his devotion to Ludwig von Mises’s book The Theory of Money and Credit. Still, he has a bone to pick. The money multiplier is a fiction, he writes. Lending does not create new money.

To convince us, the author tells us to sit at a table with four friends, one who brings $100 in cash. Have that person lend another person $90, who in turn lends someone else $81 of the $90, and that person lends his neighbor at the table $72.90. “What you’ll soon discover is that there’s still $100 sitting at the table after all the frenzied lending.”

A Question of Controlling Funds

His eccentric views on money creation notwithstanding, Tamny is a strong critic of bailouts.However, that’s not how banking works. The exercise must be done on paper. When a $100 deposit is made and $90 of it is lent, the depositor still has use of his or her $100 in a checking account. That means two people have control of the same $90 and in turn the next $81 and so on. Possession of the money doesn’t change as in Tamny’s exercise.

If someone withdraws their deposit in cash, the multiplying ends. Thus, Murray Rothbard argued that bank runs are a healthy check on banks’ ability to create money. Steve Hanke, professor of Applied Economics at the Johns Hopkins University, explains there are two types of money: what the central bank creates, and “[t]he rest of the money supply is produced by banks. It’s called bank money,” says Hanke. Banks manufacture this kind of money in electronic form by creating a matching amount of loans and deposits.

In October 2013, Valentin Schmid wrote for the Epoch Times, “Money printed by the Fed increased by 3.5 times since the collapse of Lehman Brothers in 2008 and now constitutes 20 percent of the total money supply. Bank money has decreased 12 percent, bringing down the total increase to around 3 percent, which is not very much.” Bank money may have decreased, but it was still 80 percent of the money supply.

Tamny often makes the point that money follows production. What he doesn’t glean from his own point is that money is created when businesses and individuals borrow to finance production in prosperous areas like Silicon Valley as opposed to the downtrodden Baltimore he mentions.

While Tamny considers housing a consumption good, the land and entitlements under it do not resemble consumer durables at all, but are very much long-term investments that low interest rates make much more viable with a lengthened capital structure. As Ludwig von Mises wrote, “If the market rate of interest is reduced by credit expansion, many projects which were previously deemed unprofitable get the appearance of profitability.”

Although he doesn’t mention Austrian business cycle theory by name, Tamny believes “the Fed cannot create ‘new’ or ‘easy’ credit. Credit is what we create.” He calls the notion that the Fed can stimulate malinvestment Keynesian. Low interest rates decrease the amount of credit available just as lower prices would decrease the number of Uber drivers willing to show up to pick up passengers after a Taylor Swift concert.

So what happened in 2008? Tamny contends that people rushed into housing to protect themselves from a falling dollar. Is this true? I lived in the epicenter of the housing boom at the time and never heard anyone in Las Vegas mention the falling dollar as they bought as many homes as they could finance.

His eccentric views on money creation notwithstanding, Tamny is a strong critic of bailouts. In fact, he argues that this is the whole reason that the Fed exists. “The Federal Reserve was created to prop up the biggest banks in the United States that were increasingly being made irrelevant by nontraditional forms of finance.”

Today, however, the vast majority of lending takes place outside the banking system. The percentage will only get larger as the number of banks shrinks and regulators stand in the way of renovation by banks.

Tamny does make plenty of good points in clever ways. America’s slow recovery is the result of bailing out poor entrepreneurs who do not have much hope of growth and expansion. Bailouts deprive the market of potential leaders who would otherwise take over where the poor entrepreneurs had been.

The Fed should never attempt to lift the economy from a recession, he writes. Recessions “signal an economy cleansing itself of bad businesses, malinvestment, labor mismatches, and so on.”

The government is the ultimate credit destroyer. Credit is spent on wasteful government programs that never go away, depriving entrepreneurs much-needed capital, Fed or no Fed. “Credit would be needlessly tighter even if the Fed didn’t exist,” writes the author.

Tamny ends his book abruptly with a bold, inspiring forecast. Labor-saving robots (he considers computers and cars to be robots) will create credit, and there will be no need for a central bank. “Robots, by their very name, promise cheap resources necessary for entrepreneurialism in abundance. ... If Congress doesn’t end the Fed, the robot will.”

We can only hope it happens in our lifetimes.