Kamala Harris wants to buy votes, and she has decided that it is okay to hurt the economy in hopes of achieving her political ambitions.

It seems like every Democrat in the country plans to run against Trump in 2020, and presumably, all of them will feel compelled to issue manifestos outlining their policy agendas.

This gives me lots of material for my daily column. I’ve previously written about statist initiatives from Bernie Sanders and bizarre ideas put forth by Elizabeth Warren.

Today, let’s review the two big ideas that have been unveiled by Kamala Harris, the senator from California who just announced her bid for the White House.

We’ll start with her idea to create a federal subsidy for rent payments. I wrote about this new handout last year and warned that it would enrich landlords (much as tuition subsidies enrich colleges and health subsidies enrich providers).

Here’s some of what Professor Tyler Cowen wrote for Bloomberg about the proposal:

One of the worst tendencies in American politics is to restrict supply and subsidize demand. …The likely result of such policies is high and rising prices, restricted access and often poor quality. If you limit the number of homes and apartments, for example, but give buyers subsidies, that is a formula for exorbitant prices. That is what makes early accounts of Senator Kamala Harris’s economic plans so disappointing. …Consider Harris’s embrace of subsidies for renters, as reflected by her recent sponsorship of the Rent Relief Act of 2018. Given the high price of housing in many parts of the U.S., it is easy to see why the idea might have appeal. But the best and most sustainable way of producing cheaper housing is to build more homes and apartments. The resulting increase in supply will cause prices to fall… That is basic supply and demand, with supply doing the active work. The Harris bill, in contrast, calls for tax credits to renters. …There is an obvious problem with this approach. If you subsidize renters, that will push up the price of apartments. Furthermore, economic logic suggests that big rent increases are most likely in those cases where the supply of apartments is relatively fixed, a basic principle of what is called “tax incidence theory.” In sum, most of the gains from this policy would go to landlords, not renters.

In other words, this is a perfect plan for a politician who understands “public choice” theory.

Ordinary voters think they’re getting a freebie, but the benefits actually go to those with political influence and power.

Now let’s look at her $2.7 trillion tax cut. I believe that people should be allowed to keep the lion’s share of any money they earn, so my gut instinct is to cheer.

But it’s always good to be skeptical when a politician is offering something that sounds too good to be true.

Kyle Pomerlau of the Tax Foundation has done the heavy lifting and looked closely at the details. He has a thorough explanation of her plan and its likely impact:

The “LIFT the Middle-Class Act” (LIFT) would create a new refundable tax credit available to low- and middle-income taxpayers. …LIFT would provide a refundable credit that would match a maximum of $3,000 in earned income ($6,000 for married couples filing jointly). …The credit would begin to phase out for single taxpayers starting at $30,000 of adjusted gross income (AGI) and $80,000 for single taxpayers with children, and begin phasing out for married taxpayers at $60,000 of AGI. The phaseout rate for all taxpayers would be 15 percent. …LIFT’s impact on the economy is primarily through its effect on the labor force. LIFT phases in from the first dollar of earned income to the maximum credit of $3,000 per tax filer. It then phases out starting at different levels of income, depending on a tax filer’s marital status and whether they have children. These phase-ins and phaseouts create implicit marginal subsidies and tax rates that impact individuals’ incentive to work.

At the risk of oversimplifying, Harris is proposing a new version of the earned income credit.

Kyle crunches the numbers to determine the overall economic impact:

While the positive labor force effects of the phase-in of the credit could offset the negative effect of the phaseout, we find that, on net, the size of the total labor force would shrink under this policy. This is primarily due to the large number of taxpayers that would fall in the phaseout range of the credit relative to the number of individuals that would benefit from the phase-in. …We estimate that the credit…would reduce economic output by 0.7 percent and result in about 825,906 fewer full-time equivalent jobs.

Here’s the relevant table from the Tax Foundation’s report: 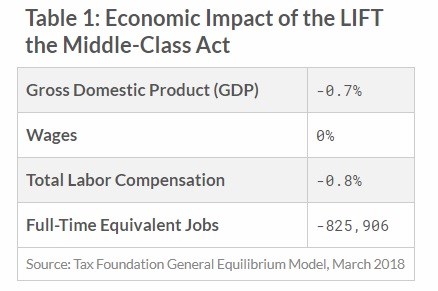 This is remarkable. It would seem impossible to design a $2.7 trillion tax cut that actually hurts the economy, but Senator Harris has succeeded in that dubious achievement.

For all intents and purposes, she has figured out how to have an anti-supply-side tax cut.

And there are two other problems that deserve attention.

Considering the poor design and upside-down economics of the rent subsidy scheme and the new tax credit, the bottom line is rather obvious: Kamala Harris wants to buy votes, and she has decided that it is okay to hurt the economy in hopes of achieving her political ambitions.

No wonder she fits in so well in Washington!