All Taxes Undermine Prosperity, but Taxes on Personal and Corporate Income Do the Most Damage

The data are in, and they show that all taxes are not created equal.

When I write about the economics of fiscal policy and need to give people an easy-to-understand explanation on how government spending affects growth, I share my four-part video series.

But other than a much-too-short primer on growth and taxation from 2016, I don’t have something similar for tax policy. So I have to direct people to various columns about marginal tax rates, double taxation, tax favoritism, tax reform, corporate taxation, and tax competition. 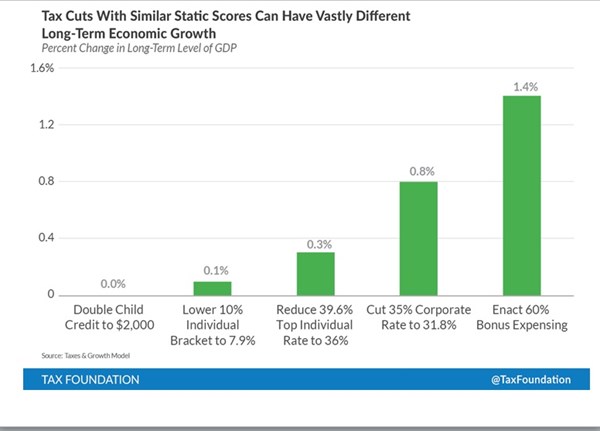 Today’s column isn’t going to be a comprehensive analysis of taxes and growth, but it is going to augment the 2016 primer by taking a close look at how some taxes are more destructive than others.

And what makes today’s column noteworthy is that I’ll be citing the work of left-leaning international bureaucracies.

Let’s look at a study from the OECD.

…taxes…affect the decisions of households to save, supply labour and invest in human capital, the decisions of firms to produce, create jobs, invest and innovate, as well as the choice of savings channels and assets by investors. What matters for these decisions is not only the level of taxes but also the way in which different tax instruments are designed and combined to generate revenues…investigating how tax structures could best be designed to promote economic growth is a key issue for tax policy making. … this study looks at consequences of taxes for both GDP per capita levels and their transitional growth rates.

For all intents and purposes, the economists at the OECD wanted to learn more about how taxes distort the quantity and quality of labor and capital, as illustrated by this flowchart from the report.

Here are the main findings (some of which I cited, in an incidental fashion, back in 2014).

Here’s how the study presented the findings. I might quibble with some of the conclusions, but it’s worth noting all the minuses in the columns for marginal tax, progressivity, top rates, dividends, capital gains, and corporate tax. 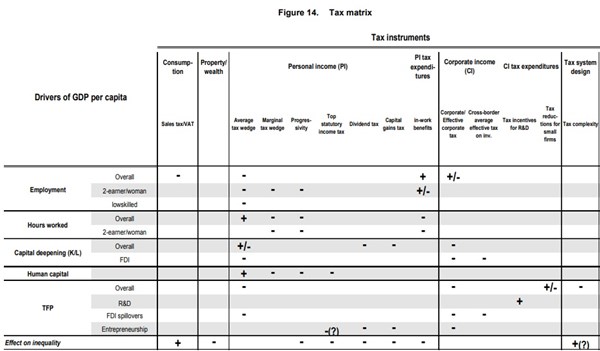 This is all based on data from relatively prosperous countries.

A new study from the International Monetary Fund, which looks at low-income nations rather than high-income nations, reaches the same conclusion.

The average tax to GDP ratio in low-income countries is 15% compared to that of 30% in advanced economies. Meanwhile, these countries are also those that are in most need of fiscal space for sustainable and inclusive growth. In the past two decades, low-income countries have made substantial efforts in strengthening revenue mobilization. …what is the most desirable tax instrument for fiscal consolidation that balances the efficiency and equity concerns. In this paper, we study quantitatively the macroeconomic and distributional impacts of different tax instruments for low-income countries.

It’s galling that the IMF report implies that there’s a “need for fiscal space” and refers to higher tax burdens as “strengthening revenue mobilization.”

But I assume some of that rhetoric was added at the direction of the political types.

The economists who crunched the numbers produced results that confirm some of the essential principles of supply-side economics.

…we conduct steady state comparison across revenue mobilization schemes where an additional tax revenues equal to 2% GDP in the benchmark economy are raised by VAT, PIT, and CIT respectively. Our quantitative results show that across the three taxes, VAT leads to the least output and consumption losses of respectively 1.8% and 4% due to its non-distorting feature… Overall, we find that among the three taxes, VAT incurs the lowest efficiency costs in terms of aggregate output and consumption, but it could be very regressive… CIT, on the other hand, though causes larger efficiency costs, but has considerable better inequality implications. PIT, however, deteriorates both the economic efficiency and equity, thus is the most detrimental instrument.

Here’s the most important chart from the study. It shows that all taxes undermine prosperity, but that personal income taxes (grey bar) and corporate income tax (white bar) do the most damage. 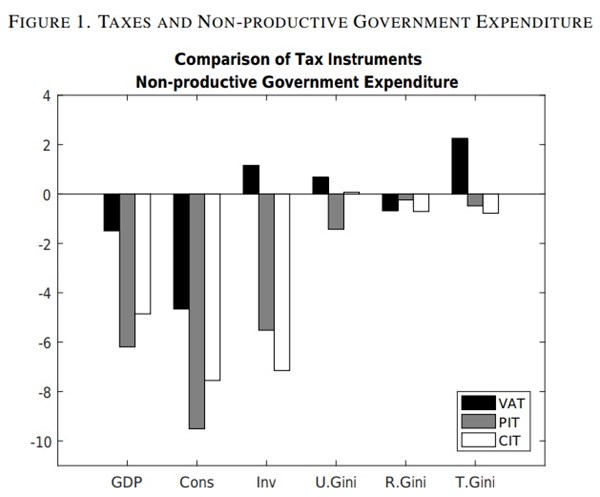 First, these two studies are further confirmation of my observation that many—perhaps most—economists at international bureaucracies generate sensible analysis. They must be very frustrated that their advice is so frequently ignored by the political appointees who push for statist policies.

Second, some well-meaning people look at this type of research and conclude that it would be okay if politicians in America imposed a value-added tax. They overlook that a VAT is bad for growth and are naive if they think a VAT somehow will lead to lower income tax burdens.

Reprinted with permission from International Liberty.