At the G7 meeting in Canada, President Trump called for a tariff-free, subsidy-free G7 area, and that's a pretty good idea.

In yet another stunning turn of events at the current G7 meeting in Canada, Donald Trump has argued for a tariff-free G7 area. This would mean zero tariffs and no subsidies. Regardless of whether Trump's suggestion is to be taken seriously, the reactions speak for themselves.

This Is Not the First Time Trump Has Suggested This

Larry Kudlow, national economic adviser to the President, had indicated to the press that he had a “lengthy discussion” about the idea of creating a tariff-free G7.

Reduce those barriers. In fact go to zero, zero tariffs, zero no-tariff barriers, zero subsidies, and along the way we are going to have to clean up the international trading system about which there was virtual consensus of agreement.

"Ultimately that's what you want, you want tariff free, no barriers, and you want no subsidies because you have some countries subsidizing industries and that's not fair," Trump said. "So you go tariff free, you go barrier free, you go subsidy free, that's the way you learned at the Wharton School of Finance."

After Trump's introduction of new tariffs on both steel and aluminum, the idea that the President would suddenly favor dropping tariffs altogether seems odd. However, it appears that the tariffs aren't really a means of getting the American steel and aluminum industry back on its feet, as mercantilists would lead you to believe, but a means of retaliation. For Trump, America's trading partners have been treating it unfairly, which is why he is obligated to respond to the trade-threat. He is, quite frankly, not entirely wrong about that.

Back in March, when plans for steel tariffs were heavily criticized in Europe, Trump tweeted this: 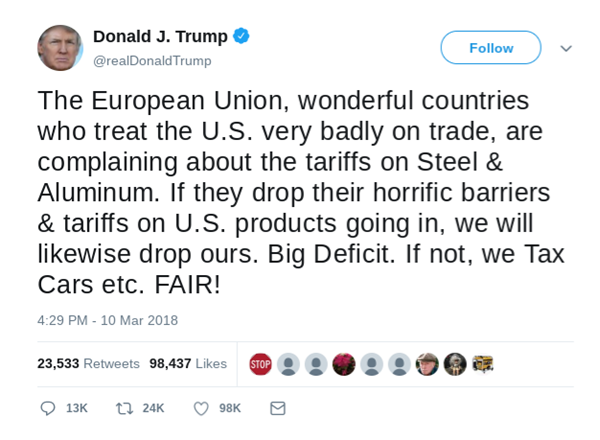 Once again, Trump appears to favor mutually scrapping all tariff and non-tariff trade barriers. This would end the insufferable regime of unnecessary protectionist policies which give consumers fewer choices and increased prices.

The (Absence of) Reactions

Sir Simon Fraser, former permanent secretary at Britain’s Foreign Office, called Trump's trade suggestion "false" and "bizarre": "It amounts to a total G7 free trade bloc for goods,” he said. “This would create massive distortions of world trade. I doubt US officials or US industry and agriculture lobbies support it.”

The self-proclaimed voices for free trade have suddenly become mute after someone suggested genuine free trade.

Sir Simon Fraser is certainly right that some agricultural lobbies would not support it, but Donald Trump was also arguably elected to oppose the swamp of lobbyists and special interests that continue to swarm Washington, D.C.

As for the G7 leaders present, most seemed to have been taken aback by the suggestion, and even after a handful of hours, the responses were still timid. The self-proclaimed voices for free trade have suddenly become mute after someone suggested genuine free trade. Could it be that they are afraid of their own agricultural lobbies at home?

Free Trade Is More than Ideology

The European Union and other G7 partners need to improve their capacity for making a consistent case for free trade. The argument for free trade is all too often made in an ideological fashion, requiring us to stand for “openness” to the world. Instead, we should focus on the economically self-evident benefits of global trade.

For example, in trade between rich and poor countries, both sides benefit, because they pay less for products, capital goods (machines, computers, etc.), and highly specialized labor. While it is true that job losses can occur when competition increases, it is important to account for increases in exports through free trade. The German car producer Mercedes might not like the competition of Italian cars on the German market, but since many Italians purchase his product, it’s manifestly more profitable to freely trade.

Tariffs aren’t anything but a useful tool for the reactionary right- and left-wing extremes of the political spectrums.

Protectionism is purely ideological because it is based on sentimental beliefs. If we were to take nationalism out of the picture, it would be difficult to argue that international free trade would be disadvantageous while domestic free trade (say, between cantons or provinces) is advantageous. This is particularly true in large trading blocs such as the European Union or, for that matter, the United States.

Tariffs aren’t anything but a useful tool for the reactionary right- and left-wing extremes of the political spectrums. They reduce the choices of consumers and increase prices for the poorest of the poor. The G7 members should take President up on his suggestion for intercontinental tariff-free trade on goods and services.

If Trump were to actually get this right, he'd prove some of his most vociferous pro-free-trade critics wrong.