A Root Cause of COVID Failure: Big Government Is Both a Monopoly and a Conglomerate

Big government incompetence is a feature, not a bug.

A key insight of the libertarian tradition is that big government failure is not due to the particular occupants of office, but rather due to the structure of big government itself and the incentives it creates. Failure is a feature, not a bug. The reaction to COVID-19 is providing a graphic display of this fact. Big government is failing in large part because it is simultaneously a monopoly and a conglomerate.

The government is the ultimate monopoly, a point which motivates much of the libertarian concern about it. Not only does this produce the usual problems – costs that are too high, service that is too low and bureaucracy that is too thick – but it also creates another that is vividly on display now: a single point of failure.

Like any human endeavor, the free market is not perfect but it has the huge advantage of always letting “a thousand flowers bloom.” It allows a large amount of experimentation and avoids too much exposure to a single failure. The governmental monopoly is the opposite. When the government screws up, it usually goes big.

This is exactly what happened with COVID-19. For responding to the outbreak, the entire month of February was lost because the Center for Disease Control (CDC) insisted on developing its own test – which ultimately did not work – and prevented any alternatives, including the already proven tests that were in use abroad. Many experts agree that widespread testing, combined with selective quarantines, is the most effective way to control the virus without destroying the economy. With an exponentially growing menace, a lost month might as well be an eternity.

In fact, the only reason why we are now making rapid progress with testing and providing equipment (such as face masks and ventilators), is that the Food and Drug Administration (FDA) and the CDC are finally somewhat lifting the heavy boot of monopoly and the free market is responding rapidly.

As a leading virologist in Germany, a country which was testing 120,000 per week in February while the CDC fumbled and which now reports the lowest fatality rate of any large Western country, put it:

We have a culture here in Germany that is actually not supporting a centralized diagnostic system, so Germany does not have a public health laboratory that would restrict other labs from doing the tests. So we had an open market from the beginning.

But all is not well even in Germany, particularly when the country brushes up against the European Union (EU) super-state. The Data Protection Office in Germany recently opined that Apple’s desire to check temperatures before allowing customers into its stores may be a violation of the EU’s privacy rules. With big government, bureaucratic rule-worshipping always trumps common sense.

The second problem is “conglomerate.” This term may be less well known to the general reader. It refers to a company – or any organization – that attempts to be all things to all people, instead of focusing on its core missions and capabilities. Corporate conglomerates had their moment in the sun during the 1960s, with names like Gulf+Western (active in businesses from sugar refining to Paramount studios) and ITT (which acquired over 300 businesses, from Wonder Bread to Sheraton Hotels), but since then they have been dismantled by a free market that realized that they were a jack of all trades, but a master of none.

This is also a characteristic of big government. However, when a government over-reaches its proper limited functions, it not only violates rights and economic rationality, but it also helps ensure that it won’t do the legitimate ones competently. This is just like the corporate conglomerates but even worse because a government is not subject to the market forces that ultimately eliminated these inefficient actors.

There is a popular myth that the government has failed with COVID-19 because small-government ideologues have starved it of money. The utter nonsense of this claim can be demonstrated with a single graph: 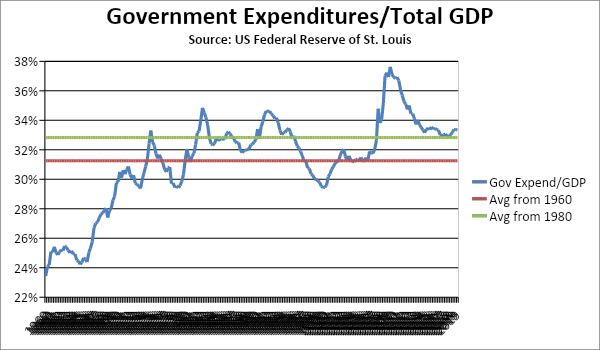 A quick glance shows that the size of government compared to the entire economy is currently well above the average since 1960 and even slightly above the average since 1980, the start of the “Reagan Revolution” which allegedly began the starvation. This is particularly impressive since we have been in a period of strong economic growth, when government expenditures typically fall (as they did in the mid-1990s).

This is true even within the CDC, the government agency responsible for dealing with pandemics. As a recent article put it, “Mission Creep and Wasteful Spending Left the CDC Unprepared for an Actual Public Health Crisis.” The article points out that CDC funding has grown from $590 million in 1987 to $8 billion in FY 2019, greatly outstripping the rate of inflation (which would have produced an equivalent 2019 budget of about $1.3 billion) and the already excessive growth of federal spending in general. But only a tiny portion of this money was spent on the CDC’s core mission. Instead, it went into things like studies of alcohol and tobacco use, athletic injuries, traffic accidents, gun violence and… $1.75 million on a “Hollywood liaison”!

The reaction to COVID-19 should be a teaching moment. There is no disputing that the “bottom-up” actions of private actors have provided much more effective responses to the crisis than the “top-down” acts of governments, the latter of which have been more of a hindrance than a help. But it is important to realize that this is not restricted to this crisis or to these particular occupants of the political or bureaucratic seats.

Like I said above, big government incompetence is a feature, not a bug.