Hopefully the CPFB's unwarranted and unconstitutional meddling will soon come to an end.

The Consumer Financial Protection Bureau (CFPB) was set up in 2010 to “make consumer financial markets work for consumers, responsible providers, and the economy as a whole.” Yet the Bureau has imposed rule after rule that hurts consumers and the middle class especially. Here are five ways the CFPB could be causing you financial problems:

If you’ve found it difficult to get a mortgage from your bank, that may be because of the CFPB’s qualified mortgage (QM) rules. The QM rule empowers trial lawyers and makes it incredibly easy for borrowers to sue banks not just for fraud and deception, but for overestimating the borrower's “ability to pay,” a standard that is inherently subjective. It also effectively outlaws even slight adjustments on a mortgage’s interest rates.

As a result of these new costs and liabilities, many small banks and credit unions have simply stopped issuing new mortgages. Middle-income responsible borrowers suffer from the lack of available mortgages the rules have created. Some of this is the fault of the Dodd-Frank statute, but it’s the CFPB that refused to exempt many rural and small banks and credit unions, as the law directs.

It is making low-dollar short-term loans very difficult to get. Everyone who is in constrained financial circumstances knows that there will come a time when you need access to ready cash quickly. Financial responsibility dictates that you pay a bill on time even if you have to borrow to do so. Of course, many people in constrained circumstances have low credit ratings and may not have a credit card, so they are forced to look for short-term loan financing like payday loans or vehicle title loans.

Yet the CFPB is looking to kill off these industries on the specious argument that they harm their consumers. As our author Hilary Miller found earlier this year, academic research into the effects of payday loans suggests that there have no harmful effects, and are possibly beneficial. If you can’t get a short-term loan and fail to pay a bill, the consequences can be devastating – yet the Bureau thinks it is protecting consumers by effectively banning them. Worse yet, the rule will actually make it difficult for credit unions to offer loans designed to pay off payday loans!

The Bureau wants you to sue people you have a disagreement rather than engage in low-cost arbitration. Taking someone to court over a commercial dispute can be very expensive and time-consuming for both sides. That’s why throughout history, customers and vendors and other parties to agreements have bound themselves to decisions from private arbitration services – George Washington even inserted an arbitration clause into his will.

Congress recognized the vital role arbitration plays in the Federal Arbitration Act in 1925. Yet the CFPB wants to ban the use of binding arbitration services in financial contracts. This will raise the costs of financial companies and therefore raise costs to middle class consumers – many of whom will no longer be able to afford the services as a result.

By forcing consumers to use the court system, most likely by being part of a class action run by trial lawyers, those middle class consumers will also suffer delays in their access to redress of grievances – a class action takes on average three years to come to a settlement while arbitration takes just under 7 months.

New rules for prepaid products could hurt innovative payment methods like Venmo. Anyone with college-age kids knows that the fastest way to get money to them when they need it is Venmo or another such payment app. Many middle class workers these days also get their wages delivered by a prepaid card, which takes away some of the hassles of having a bank account – you don’t have to wait for your wages check to clear, for instance.

Yet the CFPB is yet again worried that some people don’t understand the terms and consitions of prepaid products and payment systems and so has imposed an 800-page rule that mandates disclosures in such terms as font size – which is meaningless for an online app like Venmo. Once again, the rule will just pile up costs on financial firms and therefore reduce the amount and scope of the products they have available, harming the consumers who use those products.

The Bureau is compiling massive amounts of data, violating your privacy – and it wants to share some data even with foreign governments. As former House Speaker Newt Gingrich wrote last year in The Wall Street Journal, “Every month the CFPB … gathers data on 22 million mortgages, 5.5 million student loans, two million bank accounts with overdraft fees, and hundreds of thousands of auto sales, credit scores and deposit advance loans.”

This database has been criticized by the Government Accountability Office for potential security risks and failing to adequately protect consumer financial data. Moreover, a recent rulemaking entitled “Proposed Amendments Relating to Disclosure of Records and Information,” has come under fire from the American Civil Liberties Union as imposing prior restraints on speech.

The same rule would also allow the Bureau to share supervisory information it collected with other regulators such as state attornies general and even foreign governments, allowing the potential for unwarranted fishing expeditions, despite being explicitly forbidden from doing so in the Dodd-Frank Act.

The CFPB’s unwarranted and abusive exercise of its unconstitutional power should hopefully come to an end soon. The new President should do what he does best and fire Bureau Director Richard Cordray. The middle class will thank him for it – and so will their pocket books. 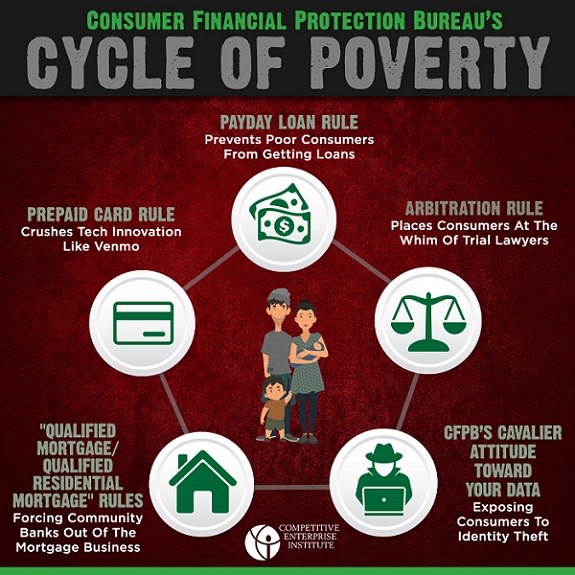