4 Charts That Show Markets Are Not Zero Sum Games

It is false that profit margins and labor cost margins are always inversely correlated.

Photo by Chris Li on Unsplash

Markets are defined as scenarios in which an exchange of goods or services is voluntary. This means that, only in the presence of fraud, person A “gains” while person B “loses” in a market exchange. If that is the case, why then do interventionists argue the opposite?

Some of them believe in the (refuted) Marxist labor theory of value and therefore assume that profits can only exist if capitalists steal the surplus value created by the labor of their employees. Others implicitly believe that consumer surpluses are a myth. Nevertheless, the main reason is that many interventionists confuse percentages with absolute numbers. A great example of this can be found in Marx's theory of “The tendency of the rate of profit to fall” and in Caporaso's “Theories of political economy” (emphasis added):

“The greater the cost of subsistence, the less the surplus value remaining to fund profit for the capitalist. In this simple scheme, profits and wages are inversely related: When one side gains the other side loses” (Chapter 3)

It is false that profit margins and labor cost margins are always inversely correlated. Even if they were correlated, an increase in real wages doesn't necessarily decrease the profit margin. 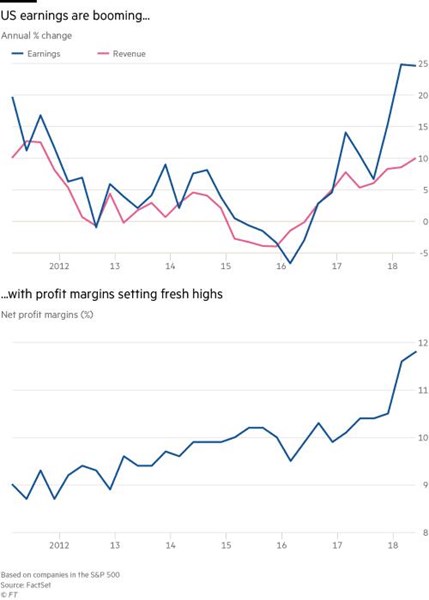 The demand for goods/services offered increases. In this example, we can see an increase in real wages if we take the inflation rate (CPI) of the US in 2018 (1.9 percent). As the example shows, there are multiple real scenarios on which both parties can get extra benefits in the form of higher gross profits and higher real wages:

Economic data also shows the non-existent inverse correlation between real wages (PCE) and profit margins in the US:

At a global scale, a similar scenario occurs: extreme global poverty has decreased even though income inequality increased in many countries. As I explained in the first paragraph, it is only a zero-sum game if the exchange is not consensual.