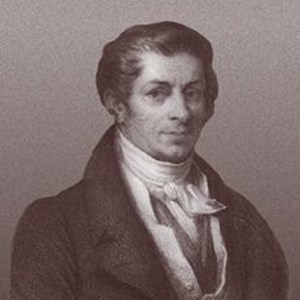 Jean-Baptiste Say (1767-1832) was the leading French political economist in the first third of the 19th century. His major theoretical work was the Traité d’économie politique (1803) which went through many editions, revisions, and translations during his lifetime. It was very influential in the U.S. during the 19thC. He was the originator of the theory that “supply creates its own demand” (called Say’s Law of Markets), which was Mill’s restatement of Say’s “products are paid for with products.” The idea that business booms are associated with temporary overproduction that adjusts itself because of the incentives for producers to sell their output was one implication of Say’s Law. [The image comes from “The Warren J. Samuels Portrait Collection at Duke University.”]