Why Sessions Is Sailing and DeVos Is Struggling

Interest group dynamics are a key factor in the growth of government. 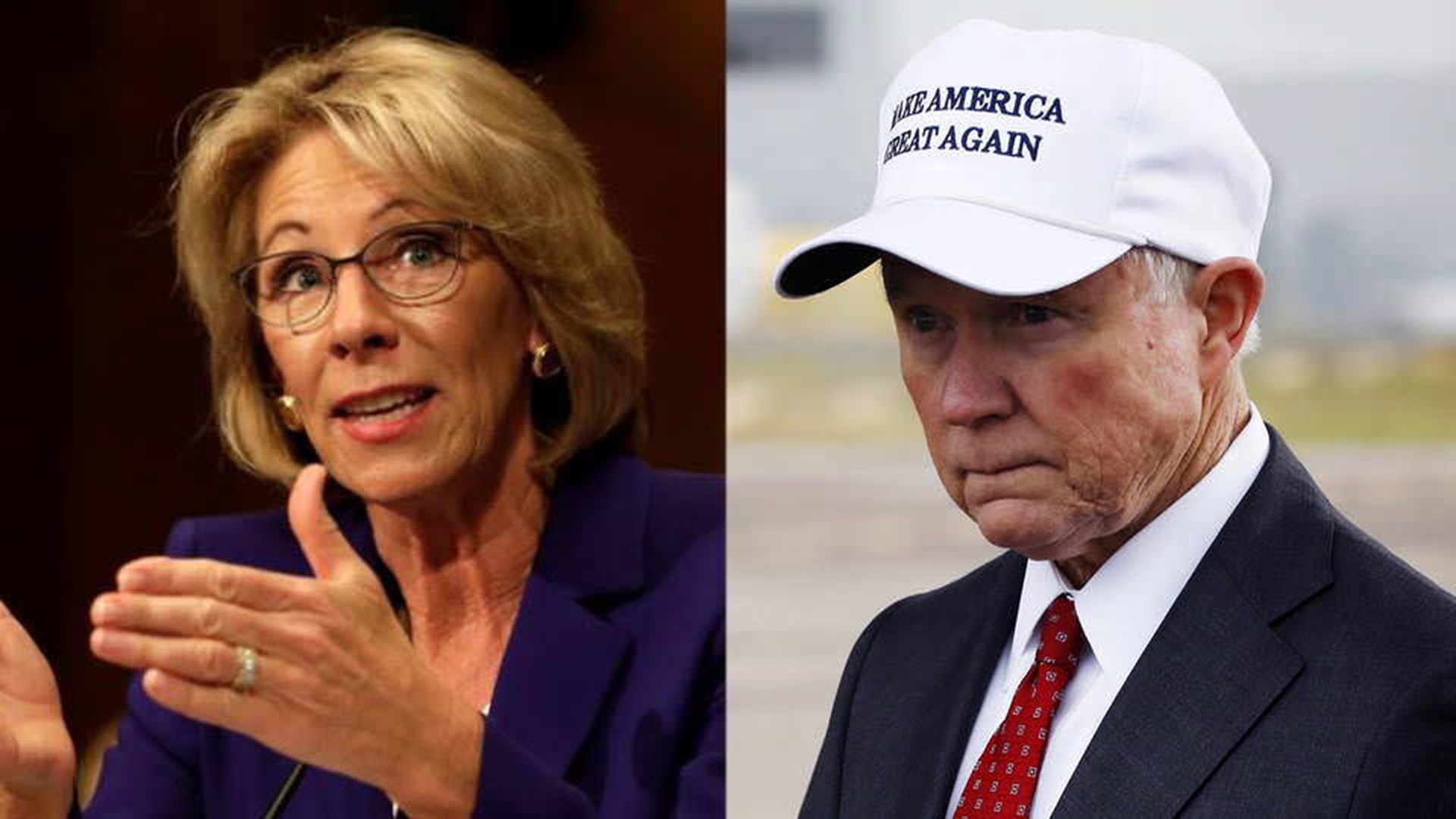 As of this writing, the Sessions nomination appears as though it will go through, while DeVos is facing significant questions, especially with the defection of two Republican senators. Whatever one thinks of the qualifications of Trump’s various Cabinet nominations, a comparison between the relatively smooth sailing of Senator Jeff Sessions for Attorney General and Betsy DeVos for Secretary of Education reveals some important lessons for the role of interest group dynamics in the political process and its relationship to furthering a free and responsible society.

All lovers of human liberty should be concerned with Sessions's nomination.For those who care about economic freedom and equal justice under the law, these two nominations make for a particularly interesting comparison. Sessions’ willingness to use the power of the State to enforce his own vision of right or wrong, including his desire to vigorously prosecute the War on Drugs, makes him a significant danger to freedom and the rule of law. His broad conception of government power combined with a belief that such powers should be used to prevent people from engaging in peaceful, voluntary actions, should concern all who care about the Constitution and civil liberties.

The threat he poses is one that could do lasting damage to fundamental institutions of freedom. The Attorney General actually has the power to enact these changes, and there’s no doubt Trump will support him in those endeavors. All lovers of human liberty should be concerned about the Sessions nomination.

DeVos for Secretary of Education

By contrast, the damage that DeVos could do as Secretary of Education is far more limited, and her support for various forms of school choice could well do some good. But even if you think she is both unqualified and wrong on policy, the powers of the Secretary of Education are far more restricted with respect to the day-to-day experiences of students and citizens in general than are those of the Attorney General.

Most of the relevant educational decisions are local, though the Department of Education certainly provides guidelines and sets some baselines. In addition, much of whatever damage she might do as Secretary could probably be reversed by subsequent Secretaries, or even by Congress.

By contrast, the Attorney General’s powers have a much greater reach and much broader scope, and changes in the fundamental relationship between the executive branch of the State and its citizens are much harder to undo than are policy changes from one particular department.

If that’s right, then why has DeVos faced much more opposition than has Sessions? One answer might well be that people just don’t care very much about human liberty in general. Perhaps. But a better answer comes from the theory of interest group politics.

The Logic of Interest Groups

In the 1960s, an economist named Mancur Olson published a book titled The Logic of Collective Action, and that was followed in the 1980s by The Rise and Decline of Nations. In those two books, Olson laid out a theory of the way interest groups behave and how they affect political decision-making that helps us see what’s happening with Sessions and DeVos.

Olson and others argued that those most likely to influence the political decision-making process will be people who can easily organize into identifiable interest groups and who stand to gain or lose materially from the actions of government. So when political actors make choices, those who stand to benefit or lose in a concentrated way from those choices will have a strong incentive to try to band together to get the result they want.

Interest group dynamics are a key factor in the growth of government.For example, if Congress proposes a large infrastructure bill, we would expect to see construction companies and closely related industries work hard to get it passed. They stand to benefit in a focused way if the bill passes and it is worth the effort to identify the other beneficiaries and form an interest group to pressure Congress.

Meanwhile, each of us as taxpayers would pay only a few dollars if the bill passes. With so little at stake, and with those costs dispersed across a large population, the incentive to form an interest group, or even act individually, to argue against the bill is nearly non-existent. This logic of concentrated benefits and dispersed costs characterizes much government spending, which is why such spending bills almost always pass even if they have few or negative benefits to society as a whole. This interest group dynamic is a key factor in the growth of government.

Gaining from the Nominations

Returning to the nominations, the application is easy. The objections to DeVos come from well-organized interest groups who perceive themselves, correctly, as bearing significant concentrated costs if she’s approved. Those interest groups exist because of the role that the federal government already plays in doling out resources through the Department of Education.

The objections to DeVos come from well-organized interest groups who perceive themselves, correctly, as bearing significant concentrated costs if she's approved.The teachers unions and the educational bureaucracy in general think that reductions in federal education spending, or a move toward school choice, will weaken their powers and reduce the resources they have. They have a very strong incentive to object to the DeVos nomination if they think she will do those things. And politicians dependent upon teacher union donations will respond accordingly.

With Sessions, there simply is really no identifiable interest group that gets the concentrated, short-run benefits from not undermining the rule of law and equal justice. Upholding those principles certainly benefits all of us, but those benefits are diffuse and they are longer-run, giving none of us sufficient incentive to spend resources trying to fight politically when those principles are threatened. Without those concentrated benefits or costs in play, there is no incentive for organized opposition.

There is one possible exception though. People who have been wrongly imprisoned, either for things that shouldn’t be crimes or through procedural errors, might have a concentrated benefit from a better legal system, but their incarceration makes it very difficult for them to organize and engage in political action. So even this possible exception is consistent with the lack of strong opposition to the Sessions nomination.

The fights over Sessions and DeVos are a reminder that one of the greatest challenges facing those who care about human liberty is developing what we might call “interest groups for liberty.” Most of the benefits of a free society are, by their very nature, dispersed, subtle, and long run. Freer societies thrive and survive over time, even as they are subject to constant churn and change in any short run.

How we persuade people to look beyond their immediate interests and understand and support the institutions of freedom that lead to long-run progress for all has always been a huge hurdle to overcome. In the end, it can only be done by changing people’s ideas so that they understand those long-run benefits and are able to exercise the responsibility necessary to avoid the temptation of short-run security at the cost of long-run freedom and prosperity.