Why Millennials Are Poorer Than Their Parents

Millennials are often scapegoated, but they really are up against some difficult odds.

If there’s one generation that has become the scapegoat for the nation’s problems, it’s the millennials.

They don’t get married and start families. They live in mom’s basement and don’t buy their own house. They drift from job to job and school to school trying to find their “passion.” In short, they can’t “adult.”

But while it’s true that these problems can be attributed to serious character flaws – which do need to be fixed - I wonder if we too often overlook the fact that millennials really are up against some difficult odds. And as a new study released by the Young Invincibles implies, one of the biggest may be student debt.

According to the Young Invincibles, research shows that “young adult workers today earn $10,000 less than young adults in 1989, a decline of 20 percent.” The study is quick to note that “a college degree – with or without debt – is still worth it.” It goes on, however, to say:

“That said, among those with a college degree, we find a strong correlation between those with no student loan debt and those with the least decline in income across the two generations.”

Observe, for example, the following two charts. The first shows the difference in earnings between boomers and millennials with various degrees of education. Those with a degree and without debt experienced the smallest decline. 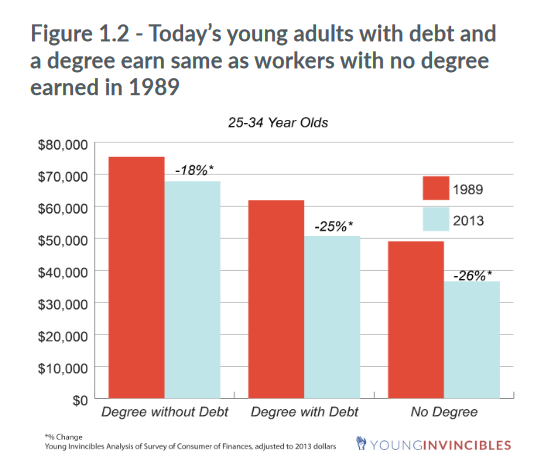 The second shows the difference in net wealth between boomers and millennials. Again, the millennials with a degree and no debt are sitting far better than those with a debt-laden degree. 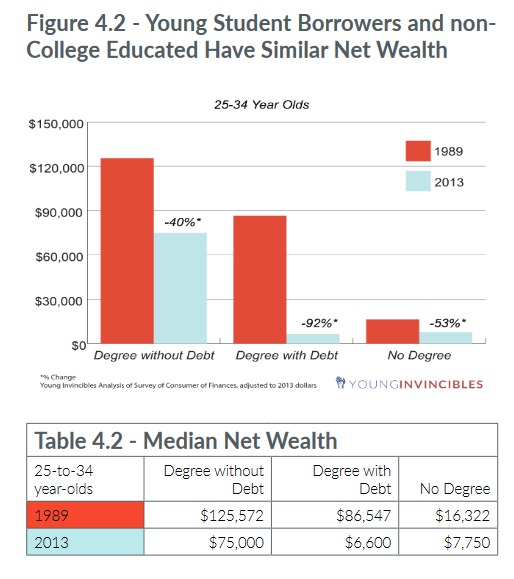 Many might immediately jump on this and argue that this is exactly why we should offer free college to everyone.

But given that college costs have risen at a far greater rate than other costs (chart below), will transferring the tuition payments from the individual to the taxpayer really solve the problem? Should we instead consider that colleges are offering students a product worth far less than they’re selling it for? 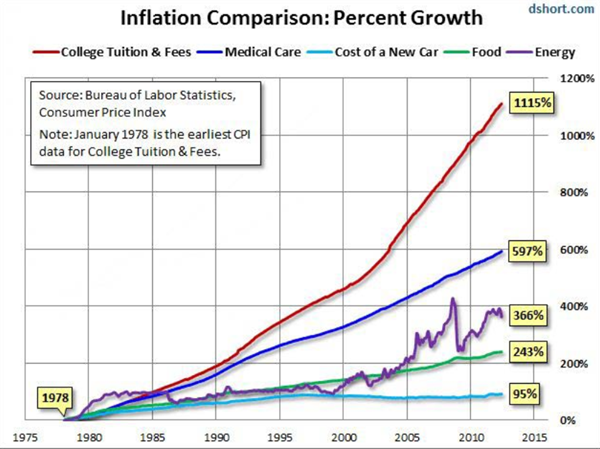