Why Is the FBI Persecuting Juggalos?

In 2011, a Federal Bureau of Investigation National Gang Threat Assessment labeled the Juggalos as “a loosely-organized hybrid gang, rapidly expanding into many U.S. communities." 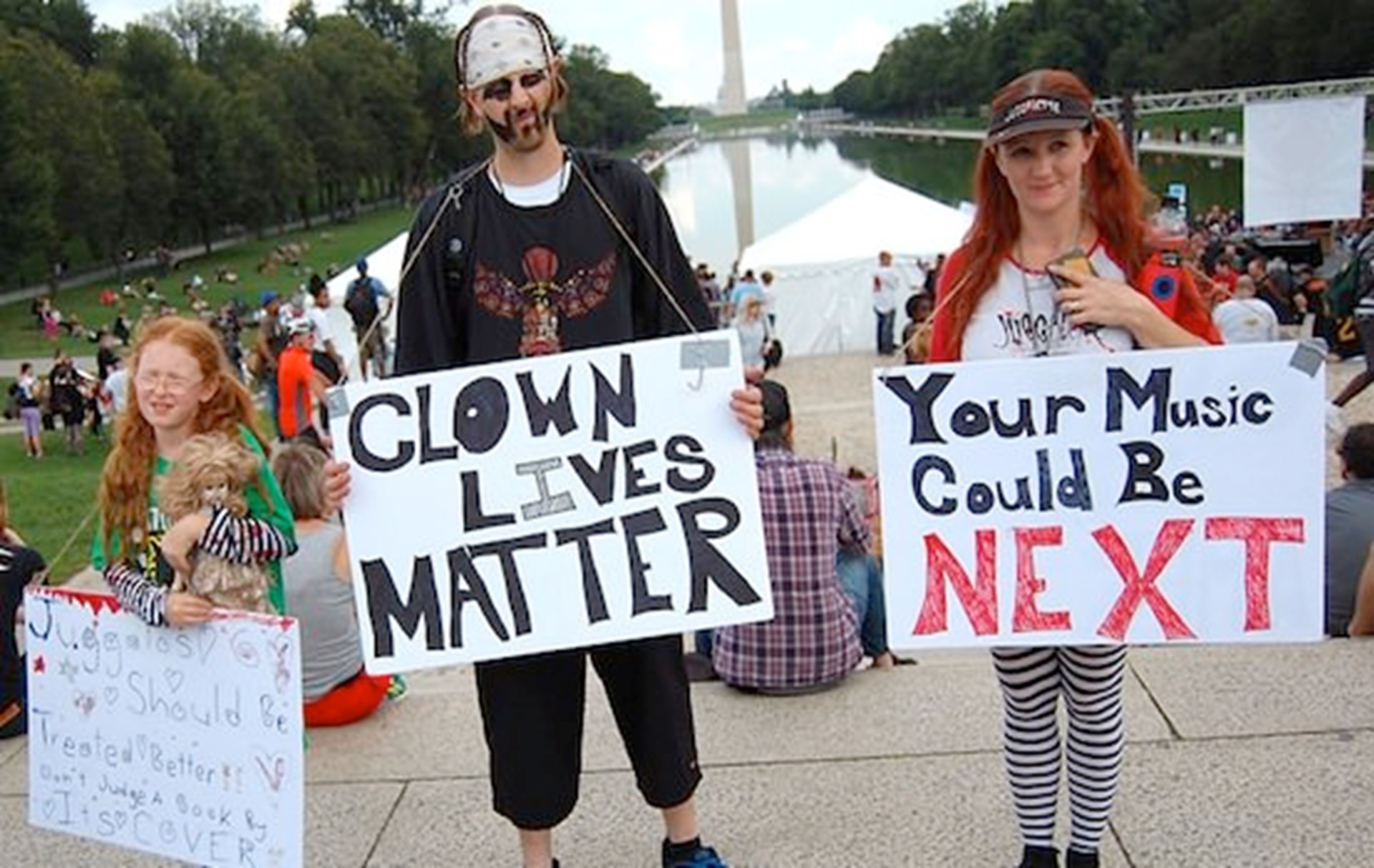 Despite being billed as a showdown of competing political protests and rallies, the only political action on the streets of Washington this past weekend were the raging clowns.

They did not come to beat Nazis or chase Pro-Trumpers off the Mall, the way the mainstream media suggested on Friday. Instead, thousands of Juggalos – ardent fans of the Insane Clown Posse (ICP) duo – assembled near the Lincoln Memorial to protest their vilification by Uncle Sam. They came to defend their honor – or at least try to get their record expunged. In 2011, the FBI labeled the Juggalos as “a loosely-organized hybrid gang."

In 2011, a Federal Bureau of Investigation National Gang Threat Assessment labeled the Juggalos as “a loosely-organized hybrid gang, rapidly expanding into many U.S. communities” and that “many Juggalos subsets exhibit gang-like behavior and engage in criminal activity and violence.”

But there were only sporadic reports of Juggalo-related criminality at that time – and nothing remotely comparable to notorious gangs such as MS-13 or the Crips and the Bloods.

The FBI report noted that “social networking websites are a popular conveyance for Juggalo sub-culture to communicate and expand.” This may be the real source of the feds’ ire. It is understandable why the Juggalos would make law enforcement nervous. The band’s logo is the Hatchetman. The band’s lyrics radiate homicidal hatred towards rednecks, anyone displaying a Confederate flag, and plenty of other targets. The pervasive profanity in ICP’s lyrics makes George Carlin sound like a choir boy.

Although the band initially scoffed at the situation, the FBI gang designation quickly produced catastrophic results for its followers who suffered “job losses, dismissal from military service, eviction, lost child custody, and constant harassment” thanks to the Hatchetman logo on their clothing, cars, or elsewhere.

We have trouble booking tours now, because no one wants gang-related shit. And if you do book a tour, it’s next to impossible to get people to insure it, because it’s a gang rally.”

Let the Juggalos Be

The group struck some menacing poses for photographers and then wandered off, perhaps to re-apply some face paint.

In 2014, the Michigan branch of the American Civil Liberties Union filed suit to overturn the gang designation, noting that “the Juggalos are fighting for the basic American right to freely express who they are,” and that “branding hundreds of thousands of music fans as gang members based on the acts of a few individuals defies logic and violates our most cherished of constitutional rights.”

ICP feels they and their fans are being unjustly censored. As Violent J (Joseph Bruce), half of the duo, told the Juggalos on Saturday with typical ICP subtlety:

Taking away someone’s opinion is no different than sewing a man’s butthole shut."

The Juggalos responded by shouting “whoop whoop!” (a trademark for the band’s supporters) and “F**k that S**t!”

ICP got a bunch of ink last week because of its outcast, working-class character and frenetic denunciations of racism and discrimination. They were all but called the anti-Alt-Right’s answer to the ‘deplorables.’ A Mic.com headline noted, “Juggalos have become the darlings of the left and the new face of anti-racist activism.”

An excited Twitterati smacked their lips in anticipation of an Antifa-Juggalo tag team against the Trump supporters gathered for the “mother of all” free speech rallies. An Antifa crew showed up on Saturday with a banner emblazoned, “GREAT LAKES ANTIFA.” One team member held up a sign proclaiming “Nazi Lives Don’t Matter” (a tricky sentiment when Antifa sometimes equates Donald Trump supporters with Nazis). The group struck some menacing poses for photographers and then wandered off, perhaps to re-apply some face paint. But most of the Juggalo attendees I spoke with were either unaware or unsupportive of Antifa’s antics in Berkeley or Boston.

The Juggalos at the rally were much friendlier than the typical attendees at a Washington formal dinner.The group struck some menacing poses for photographers and then wandered off, perhaps to re-apply some face paint. But most of the Juggalo attendees I spoke with were either unaware or unsupportive of Antifa’s antics in Berkeley or Boston.

Despite their tattoos, wacky hairstyles, and violent slogans, the Juggalos at the rally were much friendlier than the typical attendees at a Washington formal dinner. As I was walking a mile from the event’s nearest Metro stop I saw a burly, long-haired 20-something guy wearing an oversized shirt with the slogan, “Merry Fuckin X-mas.” I asked if he was heading to the Juggalo event and he responded warily that he was. Maybe my press pass raised his defenses.

It turned out he was from the distant Virginia suburbs and that his brother lived in my old hometown. I said that the locale was originally known as “Helltown” and James replied, “It still is.” I mentioned that I had worked in the 1970s for the Virginia highway department heaving dead deer off the road and into the bushes near where his brother now lived.

My personal background was enough to get James to open up to me. He said he was not wearing face paint because he had heard that Virginia considered it a misdemeanor. He said he had been continually hassled by the police.

Last year, he was driving home from his job when a cop lurking in his suburban neighborhood pulled him over. James asked why. “I could see that he was scanning my car looking for the pretext for having pulled me over,” James said.

The cop eventually noticed that James had a small Hatchet Man metal logo dangling from his rearview mirror. James said that the state of Virginia prohibits anything hanging from rearview mirrors – even though pine-scented air fresheners are understandably pervasive in much of the state. He told me about another time when he was handcuffed for no reason simply because he was suspected of gang affiliations.

Some conservative media outlets, too, have portrayed Juggalos as leftists. Not this guy: He mentioned that he had a concealed carry permit in Virginia, but would never consider packing heat in Washington, D.C. He was a big supporter of the National Rifle Association and was aware of several of the recent firearm controversies. I asked if he considered himself somewhat of a libertarian. He replied, “I am my own person. I have my own beliefs.”

James typified the nonpolitical nature of Juggalos at the event. There were also plenty of non-Juggalos in attendance who wanted to defend free speech. Alyssa – an intense 30-something woman from Muskegon, Michigan – told me she was concerned about government abuses across the board, including mandatory vaccines, GMOs in the food, and chemicals in the air. She held a placard calling for “Equality 4 All Muther F**kers.”

Will the march clear Juggalos’ names? Shaggy 2 Dope is not sanguine, explaining last month that the march is “not to get our name off the gang list, because that’s never gonna happen. It’s just for us to stand up, and put our foot down, and say, ‘Yo, we’re not cool with being labeled this.’”

But the protest march has garnered a torrent of support for the Juggalos’ cause in the media, and the feds might actually be pressured into stopping the defamation of music lovers. Regardless of the outcome, it is refreshing to see Americans converge on Washington to demand a reduction in federal idiocy.

Reprinted from The American Conservative.