Neil Monnery’s book "A Tale of Two Economies" explains how the fortunes of Hong Kong and Cuba were shaped by two individuals.

Back in 2014, I compared Hong Kong’s amazing growth with Cuba’s pitiful stagnation and made the obvious point that free markets and limited government are the right recipe for prosperity.

Especially if you care about improving the lives of the less fortunate.

Communists claim that their ideology represents the downtrodden against the elite, yet the evidence from Cuba shows wretched material deprivation for most people.

In Hong Kong, by contrast, incomes have soared for all segments of the population. 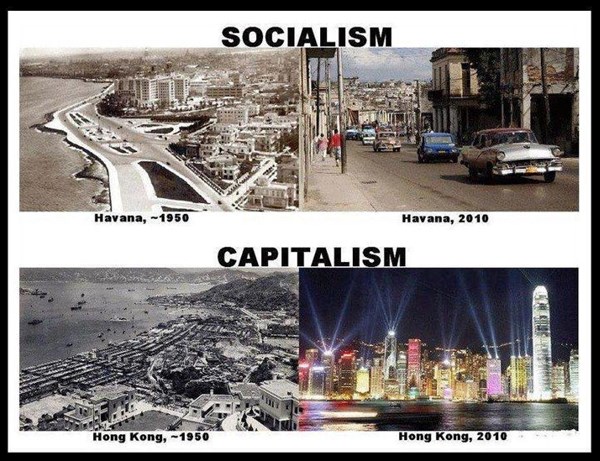 As Alberto explains, the book is about how developments in both Hong Kong and Cuba were shaped by two individuals.

How important are key individuals in shaping the success or failure of economies? …Neil Monnery’s A Tale of Two Economies is in some sense a polemic against historical determinism, at least insofar as promoting economic reforms is concerned.It stresses the importance of two single individuals, one a great man for many, one an obscure official and political unknown to the most, in shaping the destiny of their respective countries. …Ernesto “Che” Guevara and John Cowperthwaite. …Monnery insists that both of them were “deep and original thinkers.” …The key difference between the two was perhaps that Cowperthwaite had a solid education in economics… Neither the way in which Hong Kong progressed, nor Cuba’s, were thus inevitable.

I’ve written previously about the noble role of John Cowperthwaite.

Here’s what Alberto culled from the book.

Monnery points out that Hong Kong’s success happened not because Cowperthwaite and his colleague were trying “to plant an ideological flag,” but because they were “professional pragmatists.” …Then the success of relatively libertarian arrangements in Hong Kong perpetuated itself. …Cowperthwaite tested what he knew about classical economics when he “first arrived in Hong Kong, in 1945” and “was put in charge of price control.… He soon realized the problems with attempting to set prices low enough to meet consumer needs but high enough to encourage supply, and in a dynamic environment.” He opposed subsidies that he saw as “a brazen attempt to feed at the trough of government subsidies.” …Cowperthwaite is a hero to Monnery, who emphasises his competence, and even more, his integrity.

And I’ve also written about Che Guevara. but only to comment on his brutality.

It turns out he was also a lousy economic planner.

Guevara held office in a variety of capacities related to economic matters and took them seriously. In 1959, he took a three months trip to countries as different as India, Japan and Burma, to learn “how they managed their economy.” He was struck by examples of countries that succeeded in developing heavy industries and thought Cuba could do the same. …Guevara, who, once converted to Marxism, had swallowed the whole thing. Since he maintained that “the sine qua non for an economic plan is that the state controls the bulk of the means of production, and better yet, if possible, all the means of production,” he acted accordingly.

Hong Kong and Cuba were roughly equal at the start of the process. Today, not so much.

To the reader of A Tale of Two Economies, it is rather obvious which lessons ought to be taken: “in the late 1950s, both economies had a GDP per capita of around $4,500 in today’s money. By 2018 Cuba had slightly more than doubled its GDP per capita to around $9,000 per person. But Hong Kong reached $64,000 per capita”—seven times Cuba’s, and even exceeding the UK’s as well.

Here’s my modest contribution to the discussion, based on the Maddison database. 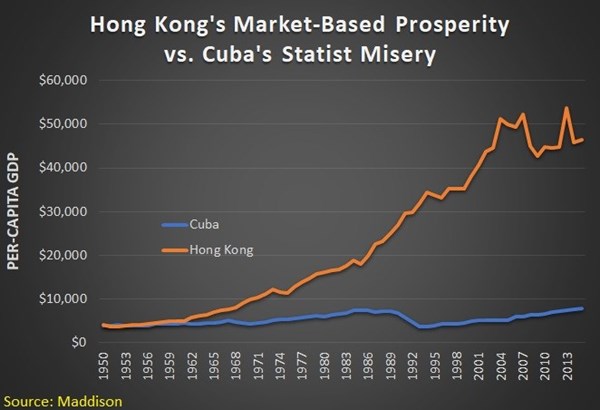 P.S. Hong Kong still ranks as the world’s freest economy, though there are increasing worries about whether China will allow economic liberty in the long run.