Why Do People Love Detective Stories?

We find in our favorite crime fighting characters, the relentless search for truth and justice.

Ayn Rand was a huge fan of romantic fiction, of stories with larger-than-life characters involved in momentous struggles. "Philosophically," she wrote, "Romanticism is a crusade to glorify man's existence; psychologically, it is experienced simply as the desire to make life interesting."

She also liked pulp fiction. And in particular, she was a big fan of tough guy heroes. Mickey Spillane's Mike Hammer was one, Ian Fleming's James Bond was another.

Thrillers are detective, spy or adventure stories. Their basic characteristic is conflict, which means: a clash of goals, which means: purposeful action in pursuit of values. Thrillers are the product, the popular offshoot, of the Romantic school of art that sees man, not as a helpless pawn of fate, but as a being who possesses volition, whose life is directed by his own value-choices. Romanticism is a value-oriented, morality-centered movement: its material is not journalistic minutiae, but the abstract, the essential, the universal principles of man’s nature – and its basic literary commandment is to portray man “as he might be and ought to be.”

She goes on to say that thrillers "are concerned with only one aspect of a moral being's existence: the battle of good against evil in terms of purposeful action."

Not surprisingly then, a great many people like pulp fiction, and especially detective stories. They like cops and private eyes who hunt down evil men, usually murderers.

Murder is the hallmark of the crime novel because murder is unambiguously evil. It is the worst imaginable crime. It doesn't merely violate a person, it takes his very life away from him.

I am writing this because of a pulp fiction novel featuring one of my favorite cops – Harry Bosch of the LAPD. I read my first Michael Connelly novel in 2016 – The Black Box, the 18th Harry Bosch novel. I was hooked and went on to read four more after that. By the end of the year, I’d read eight Connelly novels.

My wife and I then went on to watch the Bosch TV series. We subscribed to Crave TV for one reason and one reason only: to watch Bosch, a fabulous noir police show. What Gives Bosch Such Tremendous Appeal?

In preparation for the second season of the show, launched on April 21st, I decided to read the two books that the season would be based on – The Black Echo and A Darkness More Than Night.

The former is actually Michael Connelly's debut novel and won the Edgar Award for Best First Novel in 1992. While it is a brisk and edgy novel with a compelling plot that has twists and turns right to the end, it was A Darkness More Than Night that blew me away with its brilliance. It is definitely the best Bosch novel I've read so far.

The story starts with Los Angeles homicide detective Jaye Winston seeking the help of retired FBI profiler Terry McCaleb. She's looking into the murder of Edward Gunn, a scumbag reprobate who probably deserved to die. But murder is murder and Gunn was not just killed but tortured.

Winston hits a dead end and reaches out to McCaleb, who she knew before a heart transplant forced him into retirement. McCaleb revisits the crime scene and wonders about an unusual aspect – a plastic owl sitting on a shelf overlooking the scene, almost as if it was watching.

Starting with that owl as a clue, McCaleb finds himself immersed in the art of Hieronymus Bosch, the eccentric sixteenth-century Dutch artist. Owls make up a deep symbolism in Bosch's work as a harbinger of doom and a token of evil. One picture, in particular, Bosch's Garden of Earthly Delights, leaves some eerie clues. 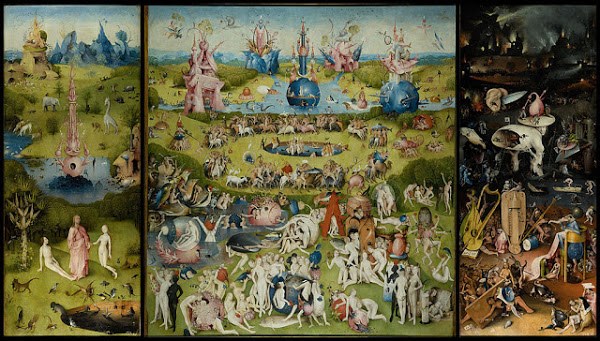 The Garden of Earthly Delights By Hieronymus Bosch (circa 1450–1516) – The Prado in Google Earth: Home – scaled down from 8 level of zoom, JPEG compression quality: Photoshop 10., Public Domain

For one, the victim was naked and trussed up in a reverse fetal position, arms and legs extended backward behind him. His legs were secured to a rope around his neck. Unable to keep his legs in this position, the victim, ironically, ended up strangling himself when his killer let go of his legs. There's an image just like it in the Garden of Earthly Delights.

These clues reluctantly lead McCaleb to consider Harry Bosch, whose real name is Hieronymus Bosch, as a suspect. Bosch had a history with the victim. He had arrested him for murder six years earlier, but Gunn had been acquitted. To this day, he is still tormented by the case. Meanwhile, Bosch is involved as a witness in the trial of a Hollywood director charged with the murder of an aspiring starlet, a case that he’d cracked.

I won't tell you more of the plot except to say that it is packed with action and interesting twists. The in-depth look into the art of the Dutchman and how it ties into the story is stunning. This is one hell of a cleverly-plotted book.

What Gives Bosch Such Tremendous Appeal?

But I want to get back to the question I raised earlier – what is it that gives Bosch such tremendous appeal?

McCaleb had worked with Bosch before and, as a profiler, kept notes not just on the victim and on the suspects, but also brief notes on the lead investigator. His insight into Bosch not only explains the character’s persona, but also explains his appeal, and ultimately the appeal of many a crime-fighting policeman in fiction. I quote it at length:

His case with Bosch had come up more than ten years earlier, before he began his more extensive profiling of the investigators as well as the cases. On this file he had written Bosch's name and just four words beneath it.

He looked at the last two notations now. It had been part of his routine to use abbreviations and shorthand when making notes that needed to be kept confidential. The last two notations were his reading on what motivated Bosch. He had come to believe that homicide detectives, a breed of cop unto themselves, called upon deep inner emotions and motivations to accept and carry out the always difficult task of their job. They were usually of two kinds, those who saw their jobs as a skill or a craft, and those who saw it as a mission in life. Ten years ago he had put Bosch into the latter class. He was a man on a mission.

This motivation in detectives could then be broken down even further as to what gave them this sense of purpose or mission. To some the job was seen as almost a game; they had some inner deficit that caused them to need to prove they were better, smarter and more cunning than their quarry. Their lives were a constant cycle of validating themselves by, in effect, invalidating the killers they sought by putting them behind bars. Others, while carrying a degree of that same inner deficit, also saw themselves with the additional dimension of being speakers for the dead. There was a sacred bond cast between victim and cop that formed at the crime scene and could not be severed. It was what ultimately pushed them into the chase and enabled them to overcome all obstacles in their path. McCaleb classified these cops as avenging angels. It had been his experience that these cop/angels were the best investigators he ever worked with. He also came to believe that they traveled closest to that unseen edge beneath which lies the abyss. Ten years before, he had classified Harry Bosch as an avenging angel. He now had to consider whether the detective had stepped too close to that edge. He had to consider that Bosch might have gone over.

That is the appeal of the crime novel, of the police detectives on television and in the movies. We see them as avenging angels, as heroic figures who will stop at nothing. We see them as empathetic warriors who, like Bosch, will not let politics or other impediments stop them.

Whether it is Michael Connelly's Harry Bosch, John Sandford's Lucas Davenport or Owen Laukkanen's duo of Windermere and Stevens, we find in these characters the relentless searcher for truth and justice.