Why China's Yuan Is Unlikely to Challenge the Dollar Anytime Soon

The internationalization of a currency is a long, multi-step process.

After the 2008 crisis, there was a decline in dollar preponderance in the international economy compared to China’s rise, as the latter gradually attempted to reduce dependence on the American currency and to discuss the possibility of the yuan becoming the main currency used in international market transactions in the future.

But is this a threat to the dollar’s hegemony? According to several researchers, monetary hegemony is achieved not only through coercion but also through the consensus of all parties involved as a synthesis between domination and direction, or as Perry Anderson says, as a “dynamic balance between force and consent.”

From An Historical Perspective

Let´s take a look at the history behind this American monetary hegemony. At the end of World War II, the Bretton-Woods agreement confirmed the United States’ central position in the international market with the definition of the international dollar-gold standard. Soon after, in 1971, Richard Nixon established the inconvertibility of the dollar versus gold relation.

This led the United States to establish “strong dollar diplomacy” in 1979.

With this act, the dollar shifted to a floating exchange system, separating the relationship and allowing the dollar to float in a flexible way. This act was called “Nixon Shock” because president Nixon made this decision without consulting the international monetary system members or even his own State Department. The United States went on to issue the key currency of international trade without any external restriction because there was no more need to maintain your local currency fixed compared to the official price of gold.

This change made by Nixon meant the exit of gold from the international monetary system and kept the world economic market (as it was before) dependent on the dollar—or, rather, the US banks. This scenario led to speculation in the 1970s that culminated in the devaluation of the US dollar against other currencies. This led the United States to establish “strong dollar diplomacy” in 1979, raising its interest rates, reducing its international market currency in order to reduce their vulnerability, and attracting investment capital from all over the world. This caused the appreciation of the US currency and consolidated the American monetary standard.

This historical scenario makes it clear that the United States has been able to demonstrate a high capacity to coordinate the world economy from its interests. Even after the 2008 crisis, which drew the world’s attention to the weaknesses of the American economic system (the “Dollar Dilemma”), there is no break from this economic order. Investors turned to US treasury bonds, which have maintained their central position in the world economic system. This brought an image of a reliable economy, representing a safe haven for investors, increasing and reinforcing the concept of universal reserve of value exerted by the dollar due to the crucial role played by the American state.

China's growth in recent years has raised questions about the dollar’s central role in the international economy.

China's growth in recent years, in conjunction with the 2008 crisis, has raised questions about the dollar’s central role in the international economy. The IMF reviews the basket of currencies every five years. In 2010, the possibility of including the yuan in the basket appeared but was not accepted. In 2015, there was a new revision, and this time its entry was established the following year. In October 2016, the yuan became part of the basket of IMF reserve currencies, along with the US dollar, euro, pound sterling, and the yen. You can see the proportions in the internationalization index of major world currencies below (data collected in 2014): 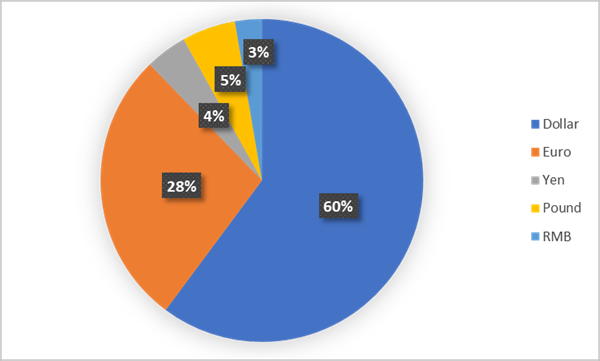 This fact represents the recognition of the global financial system to the progress made in China in recent years with the reform of its monetary and financial system. Chinese researchers believe this addition to the IMF currency basket was a success, making the yuan the fifth largest currency in the world, but despite having a growth rate of internationalization above 85 percent in comparisons with other currencies like the dollar and the euro, there is still a long way to go:

Don’t Get Too Excited

The internationalization of a currency is a long, multi-step process that involves the consolidation of currency as an international common use object, a vehicle for foreign exchange transactions, a unit of commodity price definition and, finally, acting as a reserve currency. For a currency to be international, it must meet a set of requirements favoring currencies that already have some of these conditions.

Among these requirements are the trust in its future value, a high degree of liquidity, and a chance of acceptance by others guaranteed through influence on the transactional network. Especially at the political level, domestic political stability and effective governance are needed in the country issuing the international currency. The more friends and allies, the greater the willingness of other countries to use the currency of that country.

International banks will only want to accumulate yuan if they can move their money into and out of China freely.

It is important to note that the dollar has a history. The dollar is recognized as an international currency not only because of the US market size but also its history in international treaties and negotiations seeking the alignment of mutual interests in international trade. The yuan still has a long way to go in that direction.

In order for the yuan be the next international currency, perhaps the Chinese Communist Party would have to reduce power. The Chinese authorities probably know this but seem to want to postpone it as much as possible. International banks and institutional investors will only want to accumulate yuan if they can move their money into and out of China freely and if banks are strong enough to keep up with the waves of a market-driven economy. This means there are many variables to consider before promoting the yuan to the status of the main international currency.