Because of their long-fought battle for equal access to education, it is generally assumed that black families are big fans of public schooling.

That assumption, however, is beginning to show its datedness, as evidenced by the research of University of Georgia College of Education professor Cheryl Fields-Smith. In a recent interview with The 74, Dr. Fields-Smith suggested that black families are abandoning public schools because said schools exhibit:

1. A hyper-focus on race
According to Dr. Fields-Smith, pioneering black homeschoolers were not always interested in having their children integrate the public schools. Today’s black homeschoolers see a different problem. They are choosing to bring their children home because schools have resegregated, and they don’t want them to have such a black-centric view of the world.

2. Safety issues
As with many other homeschoolers, one of the big motivations for black families to homeschool revolves around instances of violence in school. But black parents are also concerned that classroom stereotyping will negatively affect their children:

“One of the predominant themes was a sense of wanting to protect their children from being labeled a troublemaker, or suggestions that they should be in special ed, or even [schools not] acknowledging the intellect of their child because they are so focused on the behavior.”

3. A narrow vision of diversity
Although public schools pride themselves on embracing diversity and emphasizing the history of minorities, black families feel their children need a broader vision than the one currently fed to them:

“I know I had to supplement that with my kids, had to make sure that they knew their black history, because it’s not really being taught in public school. We get one month, and usually it harps on the same people. We have a very rich legacy of contributing to this country, and more than just in entertainment and sports.”

4. Poor education
As Dr. Fields-Smith explains, public schools offer a “basic education” to every child. Homeschoolers, however, are able to help their children rise above the label of average. Evidence of this was revealed in a 2015 report by Dr. Brian Ray, who found that homeschooled black children register in a percentile above the national average and far above their black public school peers: 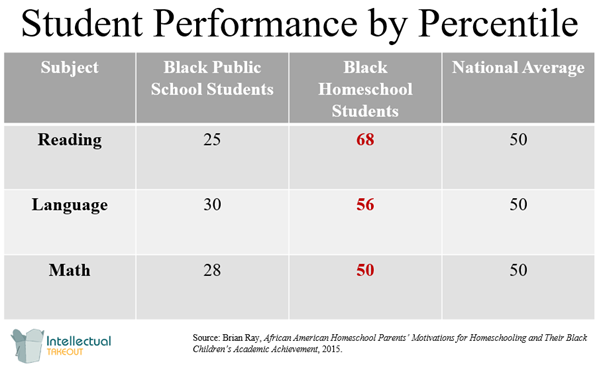 Dr. Fields-Smith goes on to say:

Is it possible that such a sentiment could be expressed by more than just black families? Have the public schools lost their savor to the American public because they can no longer offer an environment in which children of all ages, races, and abilities can thrive?