Why Are So Many Poor Americans So Overweight?

Hint: it involves the government, because of course it does.

For children and low-income people, the problem is particularly acute. A 2015 report commission by the Organization for Economic Cooperation and Development found that the US “has the fattest kids by a wide margin and is tops in poor health for teenagers.”

It’s a stunning shift in how we understand malnourishment. For almost the entirety of human history, the struggle for impoverished people was getting enough food to meet a sufficient daily caloric intake.

Today, the opposite is true: low-income people are taking in too many calories (and often bad calories, at that) and are much more likely to be overweight than people in the middle and upper classes.

Observing this fact aloud is not considered politic. For example, a few years ago British PM Anna Soubry, who served in the Department of Health, came under fire for observing that government policy and “an abundance of bad food” were causing an epidemic of fat children and low-income people in the UK.

“A third of our children leave primary school overweight or obese … When I go to my constituency, in fact when I walk around, you can almost now tell somebody’s background by their weight. Obviously, not everybody who is overweight comes from deprived backgrounds but that’s where the propensity lies.”

The US has a significantly higher percentage of its population who classify as obese than the UK, yet there seems to be even greater reticence here to acknowledge the obesity epidemic. When the problem is acknowledged, we’re often told that the way to alleviate the epidemic is through additional public spending, “such as raising the minimum wage or increasing earned-income tax credits.”

But one wonders if public spending is what is partly fueling the obesity epidemic.

The federal government oversees the nation’s $74 billion food stamp program, formally known as SNAP (the Supplemental Nutrition Assistance Program). The program (then called the Food Stamp Program) was launched in 1964 after a three-year pilot program, but it did not go nationwide until 1974, at which point participation reached almost 14 million.

What’s interesting is that government data reveals this is almost precisely the same year America’s obesity rise began, as the Bloomberg chart below illustrates. 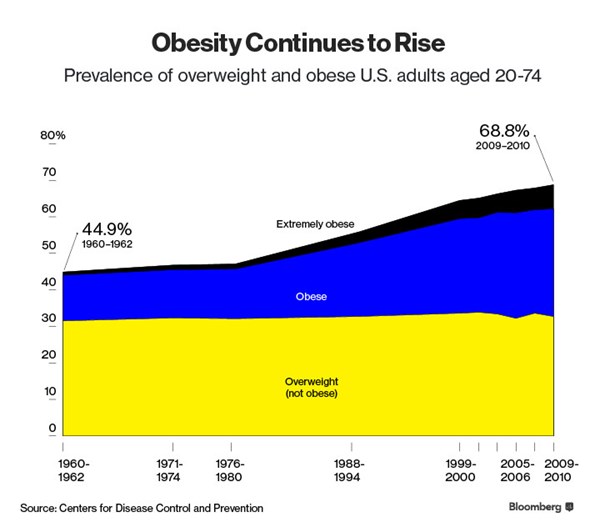 Could the government’s own policies be fueling the rise? It seems possible.

Government data show the typical American family on food stamps receives about $500 per month to spend on food, and as much as $771. That’s significantly more than my family of five spends per month (we're prudent shoppers, but definitely foodies).

Government data also shows that people on food stamps purchase soda (#1) and bag snacks (#4) at higher rates than non-SNAP households. It certainly seems possible that these unhealthy items are being purchased in larger quantities than they would absent food stamp (or "EBT") income. 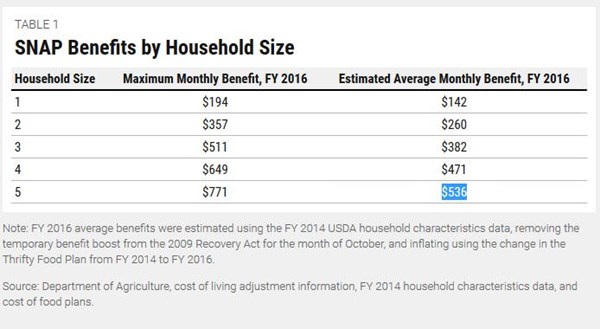 Now, there is an old argument that suggests that poor people eat unhealthy food because they cannot afford to eat healthy food. But I’ve always found this argument unpersuasive.

The America Farm Bureau Federation says the price of eggs, arguably the healthiest food on the planet, is $1.32 per dozen. Other highly nutritious foods – beans, rice, and bananas, to name a few – are similarly inexpensive. It seems more likely that most welfare recipients choose to eat unhealthy food because it's easy (no prep), tastes good, is designed to be addictive, and they have the resources to buy large quantities of it thanks to their monthly government benefit.

Since the US food assistance program went nationwide in 1974, the number of Americans collecting assistance has more than tripled, to 45 million today. The increase in food stamp assistance has tracked closely with the rise in obesity rates. While it’s unclear if there's causation behind this correlation, it bears asking: have federal food assistance policies contributed to the surge in obesity in America?

I don't know the answer to the question, but the thesis is not particularly original.

In 1766, in his tract On the Price of Corn and Management of the Poor, Benjamin Franklin noted that public efforts to alleviate poverty often had perverse effects on the people they were intended to help:

To Franklin's point, I can think of few things that would make people "easier in their poverty" than a program like SNAP. If SNAP is contributing to the obesity epidemic, is our government doing a great disservice to these people?