"Star Wars" is arguably one of the only viable mythos for America.

My childhood, like those so many others, was the combination of George Lucas, Steven Spielberg, and, of course, John Williams. I would often sit, perhaps unhealthily, for hours at a time in front of a TV watching VHS tapes of dinosaurs eating people, a professor stealing holy artifacts, and lightsabers crashing. I absorbed it all, and my brothers and I practiced it. We would duel with our plastic (the old sturdy ones) lightsabers, hurting each other's’ fingers and feelings. Around high school, I had somewhat of a “nerd-retreat,” a time when being a fan of Star Wars was for some reason “uncool.” College reopened my love for the great saga, and now, I unashamedly utilize the galaxy far, far away in my classroom teaching economics and government.

The Hero’s Journey through Space

In order to understand this question, we need to understand the definition of a key word: mythos. A mythos is a common set of stories that can be used to explain the world, and more often provide a foundation for a cultural morality. A mythos is not the equivalent of religion. Religion tends to provide an explicit and prescriptive morality. A mythos provides more of a cornerstone worldview, a basic layer for others to build upon with morality.

The essence of a mythos should make us wonder in awe, tap into our imagination, bring out our inner child.Any discussion of mythos has to include the renowned mythologist Joseph Campbell, whose seminal work The Hero with a Thousand Faces elaborated on what’s called the “hero’s journey.” Essentially, the hero’s journey is a basic story structure where a seemingly boring individual rises to become a hero with the aid of mentors and friends, and must brave great adventures and villains. Campbell identified the hero’s journey across all cultures. The same basic myth-narrative is repeated in nearly all geographies and ethnicities. The hero’s journey is, at heart, the common human story repeated everywhere.

This monomyth, as it is called, has been studied and examined ever since Campbell’s work was published in 1949. It’s changed here and there, with different scholars adding different things, but it remains more or less the same. The monomyth can be clearly seen through the Star Wars saga, but it is especially clear in Episode IV: A New Hope.

Luke, a seemingly unbecoming farm boy, is called to the adventure of saving a captured princess from black-cloaked villain, and initially refuses. With the help of a wizardly mentor and a band of equally unbecoming allies, he becomes entrapped in the belly of the beast (the Death Star), from which they escape with their reward (the Death Star plans), but not before Luke endures the pain of watching his mentor (old Ben Kenobi) die. The final trial, destroying the beast, is Luke’s great transformation from the boy on Tatooine to the next generation of warriors (the Jedi Knights). 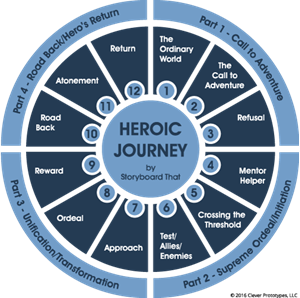 This is fascinating stuff, and very exciting. Not only was the 1977 cinematic experience great, but the entire saga’s story is wonderful, however much it may be masked by poor dialogue and acting. Film critics have never been a fan of the movies, even for their stories. They say it’s too easy, made for children, cartoonish, etc. I read that as, “This isn’t morally ambiguous, and therefore, it’s not a good story.” Such nihilism is apparently cool, but I don’t buy it. No, the stories aren’t all that complex, but that’s the point. Remember, a mythos is supposed to aid us in developing an understanding of the world from a certain point of view.

Through stories, we lay a foundation to build an ethical code founded in morality. The purpose is to get us to think about how we act and why we act. If we get bogged down in Inception-class complexity, we lose that powerful purpose.

The story in Star Wars is intentionally simple. The characters aren’t stereotypical, but archetypical, and resonate a certain set of traits we can easily identify. It can sometimes feel like a children’s story, but again, that’s the point. The essence of a mythos should make us wonder in awe, tap into our imagination, bring out our inner child. When I watch these movies, I’m like a giddy boy, relishing in the narrative. When the movie is done, it’s almost as if my inner child, having finished the adventure, returns and consults with my adult on what just happened. That’s mythos: the dialogue between wonder and reason.

The master of this myth-creating process was J.R.R. Tolkien, author of Lord of the Rings and The Hobbit. He saw that England lacked a true mythos, one separated from reality (thus eliminating anything relating to King Arthur and Beowulf). He set out to create an entire universe he could populate with stories; thus was born Middle Earth. His goal wasn’t necessarily to write great stories (which he did), but to provide an epic universe with histories, a genesis (see: The Silmarillion), and languages with dialects. LOTR has a distinctly English feeling to it, one his countrymen could understand. He wrote it so others could think about the world in a certain way. Some of these stories, like The Hobbit, are so relatable they feel like a children’s story.

Americans love a good cops and robbers story, but we also seek a peaceful tranquility of balance. Star Wars gives us that battle along with a harmonious spirituality.Now, George Lucas is no Tolkien. He is a controversial creator, one who nearly destroyed his saga. His storylines can be disjointed, almost contradictory, and he can seem self-serving. Nevertheless, his universe is a fountain of myth, and one that resonates with millions of Americans. Why?

America, at its core, is part of Western Civilization, and relies heavily upon its philosophy and religions. As such, it is greatly influenced by the moral idea that there exists objective good and evil. But we are also a multicultural nation, one that has accepted and welcomed many Eastern philosophies as well. As Americans, we are intrigued by the initially exotic beliefs of the East, and we find a certain tranquility in them. We are drawn toward the idea of a Buddhist monk devoid of personal possession and at peace with everything. We see his balance, and we desire it.

Star Wars seeks to establish a clear dynamic between good and evil: the Rebel Alliance and the Galactic Empire, the Jedi and Sith, Luke Skywalker and Darth Vader. There is great conflict between these easily identified sides (I mean, for crying out loud, the lightsaber colors reveal it all). Yet, the theme of balance is always present. Luke literally balances Yoda on his foot upside down while balancing rocks. C’mon. The Chosen One was to bring balance to the Force, a Force which is at once an inanimate energy field made up of microorganisms, and yet also a personal, willing thing. Is this a contradiction? No, it’s the basis of a mythos worldview.

Americans love a good cops and robbers story, the cowboys and Indians conflict. But we also seek a peaceful tranquility of balance. Star Wars gives us that battle, but simultaneously breathes of a harmonious spirituality. Destiny must be fulfilled in this universe, but personal choice never disappears. Americans, historically, believe they have a duty, a manifest destiny, in the world. But liberty is at our heart too, and we can choose to reject this perceived duty. We are drawn to Star Wars because it mimics what we feel in the first place.

We need Star Wars because, much like the Force itself, it can surround and bind us together.Why does this matter? I believe it is very important for great societies to have a basic cultural commonality. For America, we used to be fairly homogenous in our Protestant religion. That’s not the case anymore, and even when it was, there was no unified denomination. Religion doesn’t make the cut to act as our cultural unifier, and politics certainly doesn’t either. We need a myth, one with an acceptable starting point, a Square One. Star Wars is arguably one of the only viable mythos for America. It has such a wide arrangement of characters and messages that different people can gain different things from it. It embraces our Western-Eastern dichotomy, and, quite frankly, it’s pure fun.

We need Star Wars not because it is a masterfully created cinematic experience, has great dialogue, or anything like that. We need it because the story, much like the Force itself, can surround and bind us together.

A version of this article first appeared at the Catholic Beer Club.