Which States Did Americans Leave in 2016?

New data shows that Americans moved away from states with high taxes.

Migration patterns for 2016 show that Americans tended to move away from high-tax states and into states where residents keep more of what they earn. 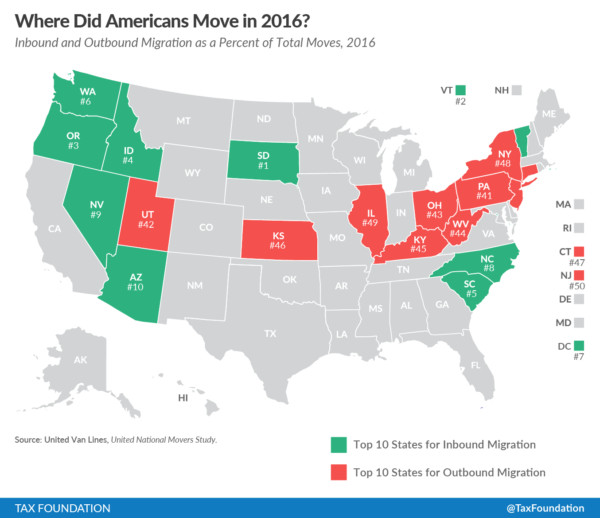 The Tax Foundation pointed out in a recent blog post that those results are similar to the organization’s annual state business tax climate index.

In fact, New Jersey, which saw an outbound rate of 63 percent—meaning nearly two people moved out of the Garden State for every person who moved in, also finished last in that index. New York had the second-worst business tax climate, according to the Tax Foundation. Connecticut was eighth-worst while Illinois was more middle of the pack.

The Tax Foundation said the absence of a major tax such as the corporate income tax, individual income tax, or sales tax is a common factor among most of the states that rank in the top 10 on the business climate tax index.

Nicole Kaeding, author of the migration post, noted that taxes are sometimes overcited as a primary reason why people move out of states, but they certainly can play a significant role, as is evidenced by the similar results in the Tax Foundation and United Van Lines studies.

She noted, for example, a person moving to Chicago for a job might decide to commute from nearby Indiana where the individual income tax rate is 3.3 percent, rather than live in Illinois, where the same rate is 3.75 percent.

Republished from the Daily Signal

Johnny Kampis is a reporter for Watchdog.org, a national network of investigative reporters covering waste, fraud and abuse in government. Watchdog.org is a project of the nonprofit Franklin Center for Government & Public Integrity.