Which Country Punishes Productive People the Most?

Back in 2014, I shared some data from the Tax Foundation that measured the degree to which various developed nations punished high-income earners.

This measure of relative “progressivity” focused on personal income taxes. And that’s important because that levy often is the most onerous for highly productive residents of a nation.

But there are other taxes that also create a gap between what such taxpayers earn and produce and what they ultimately are able to consume and enjoy. What about the effects of payroll taxes? Of consumption taxes and other levies?

Looking at the Evidence

To answer that question, we have a very useful study from the European Policy Information Center on this topic. Authored by Alexander Fritz Englund and Jacob Lundberg, it looks at the total marginal tax rate on each nation’s most productive taxpayers.

They start with some sensible observations about why marginal tax rates matter, basically echoing what I wrote after last year’s Super Bowl.

Here’s what Englund and Lundberg wrote.

They then explain why they include payroll taxes in their calculations.

The income tax alone does not provide a complete picture of how the tax system affects incentives to work and earn income. Many countries require employers and/or employees to pay social contributions. It is not uncommon for the associated benefits to be capped while the contribution itself is uncapped, meaning it is a de facto tax for high-income earners. Even those social contributions that are legally paid by the employer will in the end be paid by the employee as the employer should be expected to shift the burden of the tax through lower gross wages.”

Englund and Lundberg are correct. A payroll tax (sometimes called a “social insurance” levy) will be just as destructive as a regular income tax if workers aren’t “earning” some sort of additional benefit. And they’re also right when they point out that payroll taxes “paid” by employers actually are borne by workers.

They then explain why they include a measure of consumption taxation.

One must also take value-added taxes and other consumption taxes into account. Consumption taxes reduce the purchasing power of wage-earners and thus affect the return to working. In principle, it does not matter whether taxation takes place when income is earned or when it is consumed, as the ultimate purpose of work is consumption.”

And when you begin to add everything together, you get the most accurate measure of government greed.

Taking all these taxes into account, one can compute the effective marginal tax rate. This shows how many cents the government receives for every euro of additional employee compensation paid by the firm. …If the top effective tax rate is 75 percent, as in Sweden, a person who contributes 100 additional euros to the economy will only be allowed to keep 25 euros while 75 euros are appropriated by the government. The tax system thus drives a wedge between the social and private return to work. …High marginal tax rates disconnect the private and social returns to economic activity and thereby the invisible hand ceases to function. For this reason, taxation causes distortions and is costly to society. High marginal tax rates make it less worthwhile to supply labour on the formal labour market and more worthwhile to spend time on household work, black market activities and tax avoidance.”

Keep in mind that these are the taxes that impact each nation’s most productive taxpayers. So that includes top income tax rates, both for the central governments and sub-national governments, as well as surtaxes. It includes various social insurance levies, to the extent such taxes apply to all income. And it includes a measure of estimated consumption taxation. 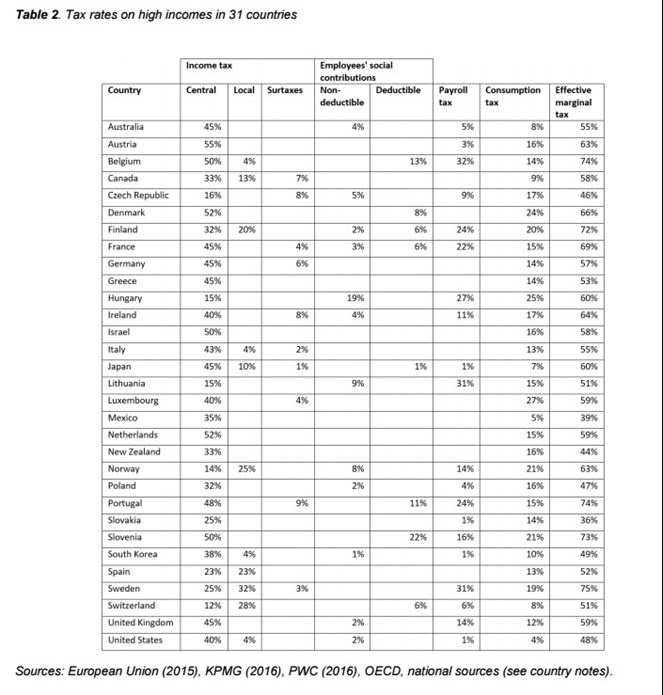 And here’s the ranking of all the nations. Shed a tear for entrepreneurs in Sweden, Belgium, and Portugal.

Slovakia wins the prize for the least-punitive tax regime, though it’s worth noting that Hong Kong easily would have the best system if it was included in the ranking. 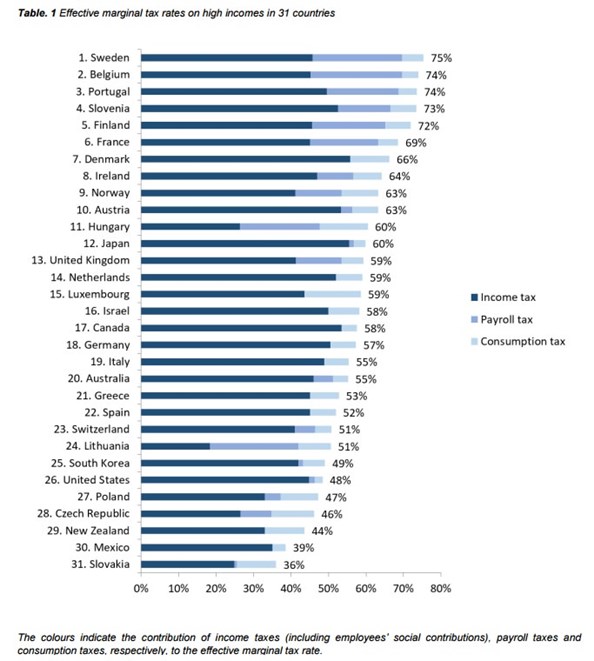 For what it’s worth, the United States does fairly well compared to other nations. This is not because our personal income tax is reasonable (see dark blue bars), but rather because Barack Obama and Hillary Clinton were unsuccessful in their efforts to bust the “wage base cap” and apply the Social Security payroll tax on all income. We also thankfully don’t have a value-added tax. These factors explain why our medium-blue and light-blue bars are the smallest.

By the way, this doesn’t mean we have a friendly system for upper-income taxpayers in America. They lose almost half of every dollar they generate for the economy. And whether one is looking at Tax Foundation numbers, Congressional Budget Office calculations, information from the New York Times, or data from the IRS, rich people in the United States are paying a hugely disproportionate share of the tax burden.

Though none of this satisfies the statists. They actually would like us to think that letting well-to-do taxpayers keep any of their money is akin to a handout.

In the 1980s, for instance, upper-income taxpayers paid far more revenue to the government when Reagan lowered the top income tax rate from 70 percent to 28 percent.

Also, keep in mind that these calculations don’t measure the tax bias against saving and investment, so the tax burden on some upper-income taxpayers may be higher or lower depending on the degree to which countries penalize capital formation.

P.P.S. Our statist friends sometimes justify punitive taxes as a way of using coercion to produce more equality, but the net effect of such policies is weaker growth and that means it is more difficult for lower-income and middle-income people to climb the economic ladder. In other words, unfettered markets are the best way to get social mobility.