Where the Top 5 Democratic Candidates Stand on Education

Rhetorically, each stance carries an air of innovation when, in reality, all of the candidates’ proposals hinge on one central idea: increased funding.

At the predominantly poor and minority school where one of us teaches, there is a delightful book room that carries a pristine collection of contemporary young adult fiction and western classics. The books are in pristine condition because they are untouched. The district purchased large classroom libraries to promote student choice and independent reading only to implement a curriculum that didn’t include it. And so, their investment in books goes without use while kids freely roam the halls. Such are the fiscal decisions of many public schools.

Each stance carries an air of innovation when, in reality, all of the candidates’ proposals hinge on one central idea: increased funding.

As both of us are public school teachers, we take a special interest in what presidential candidates propose for improving education and other situations. In researching their proposals, what has stood out in this latest iteration of candidates is a predilection for budget reform without any concern for wasteful or ineffective structures and incentives. The rhetoric surrounding each recommendation carries an air of innovation when, in reality, all of the candidates’ proposals hinge on one central idea: increased funding.

Unfortunately, as the opening anecdote begins to show, in our current system, more money guarantees nothing because much goes to waste. Below we review the education platforms of the top five Democratic candidates and, hopefully, outline why exactly they all fall short.

Joe Biden’s education plan exemplifies the simplicity that pervades each proposal. Worked into it is a variety of ideas regarding how the money should be spent—increased support staff like social workers, higher teacher pay, student loan forgiveness, expanded pre-K, free community college—but at its foundation is an increase of Title I spending from $15 billion a year to $45 billion.

Since the 1970s, US spending on education has increased by almost 200 percent with negligible, if any, increases in reading or math scores.

Passed in 1965 by Lyndon B. Johnson as part of his “War on Poverty,” the Every Student Succeeds Act provides Title I federal funding to schools with predominantly low-income students. Thus, his plan to triple Title I funds is synonymous with more federal money.

Regarding the efficacy of the initiatives that would receive the funds, there is unending research: If increased teacher pay leads to better results or not. If community schools, charter schools, or magnet schools are the best option. Whether or not a pre-k makes a meaningful impact. Each fine point is arguable, but mirroring his singular proposal, one graph alone undercuts it all. Since the 1970s, US spending on education has increased by almost 200 percent with negligible, if any, increases in reading or math scores. 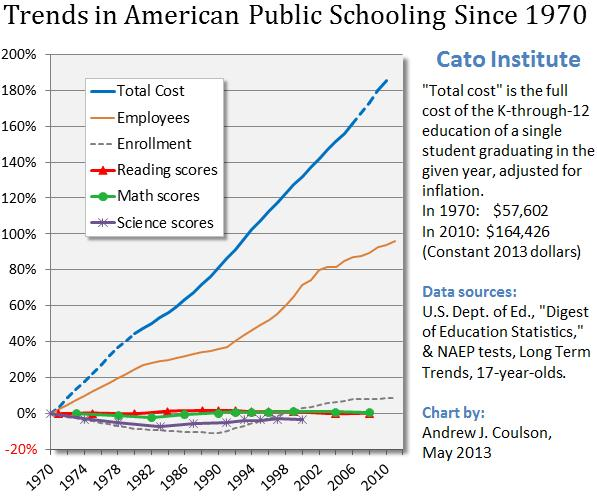 Similarly, according to the National Center for Education Statistics, the United States spends more per student than any country except for Norway, yet its schools trail far behind countries like Japan or Finland. Study after study has shown that bigger budgets produce little to no results.

This is because more money only bloats a broken system. In the current political and fiscal structure of education where schools receive a constant supply of money from property taxes, poor spending decisions receive no marked consequences, so increased budgets inevitably go to ineffective causes: Unmet federal funding goals encourage hiring extra support staff, bureaucrats take home pay while teachers see no increase, pensions drain budgets, or districts simply make unwise decisions like the one to fill a book room that would never be used. This problem is not one of too little money.

To much fervor, Bernie Sanders released his Thurgood Marshall Plan for Public Education and subsequently came under attack from both the left and right. In his plan, he recommends increased Title I funds, strengthening the IDEA Act (yet another source of money), and raising teacher salaries, but it was his recommendation to place a moratorium on charter schools that has drawn the sharpest criticism.

Unlike budget-focused reforms, charter schools and school choice, a related reform that Sanders also opposes, are together a structural change that could begin restorations. Charter schools that experimented with innovative techniques produced higher test results, especially with minority students.School choice—where students choose their school and that establishment then receives funds—applies market pressure to schools, while deregulated charters are free to respond to that pressure and thereby make local, organic reforms in place of top-down mandates.

With regard to the school with the book room, in a system of choice, if a room of books went unused, parents could opt to send their children to another school where students spend time reading. Facing a fiscal impact, this school would then have to put their purchase to use or be more reticent to spend in the future. With charters, in place of a mandate from some district office, teachers and administrators in the local building could purchase books that they would use and are in line with their goals, teaching philosophies, and student needs.

Accordingly, charters have experimented with innovative techniques and produced higher test results than traditional public schools, especially with minority students. Where implemented, school choice has both improved test scores and concurrently saved money. Together, they restructure the system and its incentives instead of merely hobbling it along with monetary sedatives.

Along with Sanders and Biden, Harris has centralized education reform in her candidacy. She released a platform in which she proposes an immediate $13,500 raise for all teachers, mandates that local systems align their budgets to national standards, and provides federal funding for unions. As with others, the theme of Harris’s plan is money. Give it to teachers, their professional development, and their unions. According to her, estate taxes will fund the increases, but she doesn’t specify what bracket or how much she intends to tax.

Her recommendation for a teacher raise exemplifies yet again the difference between budget and structural reforms. Merit-based pay, wherein teachers are evaluated and compensated for their results, not the length of their career, incentivizes performance.As it stands, most districts determine a teacher’s pay based on the years they have worked and the number of post-baccalaureate credits they have earned—in some cases, it doesn’t even matter the content of those credits, education or otherwise. This pay scale incentivizes longevity in the profession. This not bad per se, but it provides no reward for quality.

In contrast, merit-based pay, wherein teachers are evaluated and compensated for their results, not the number of years they spent teaching, incentivizes performance. A study from the US Department of Education found that, sure enough, when districts used pay-for-performance systems of compensation, students scored better on tests. When Kamala Harris proposes a blanket raise for all teachers—some teachers are underpaid, yes, but others make as much as architects—like the other candidates, she misses the structural issues endemic to the current system.

Both Pete Buttigieg and Elizabeth Warren have remained largely silent on the education question. Warren has flip-flopped on questions of charters and choice in the past, but her campaign website, which has a plan for seemingly everything, makes no comment on education.

Education is one area where Buttigieg is actually moderate compared to other nominees. Regarding charters, he supports their use as a “laboratory for techniques that can be replicated” but went on to say they should not receive state or federal funding of any kind. In line with his peers, he seeks to drastically increase pay for teachers in Title I schools. He has given more commentary than Warren, but unlike Harris, Biden, and Sanders, he has no set plan.

As the adage goes,

The public education system is a broken arcade machine. Each democratic candidate has recommended more money without recommendations to fix the system itself, like putting another quarter in without concern for why the pinball won’t drop and the lights remain dark.

All promise to give more money to the education system, but few, if any, have shown any aptitude in understanding the real problems that plague schools and their teachers: guaranteed funding leaves schools unaccountable, top-down mandates keep them from responding to local needs, and current pay scales ignore a teacher’s performance. Instead, structural changes are necessary. School choice, charters, and merit-based pay may not be the exact reforms to fix the system, but they at least begin to address the underlying issues.

Tony Kinnett is a curriculum lead and biology teacher from Indiana, a columnist for Lone Conservative with words in the Washington Examiner's Red Alert.