What’s Up with Inflation?

Inflation as measured by the Consumer Price Index (CPI) has been almost nonexistent for several years, though it started creeping higher in the first half of 2011. Yet many prices have been rising at double-digit percentage rates. Are official figures trustworthy? And what of expectations? There is a great deal of buzz right now about inflation but also talk of renewed stagnation with the Fed’s QE2 program having ended in June. Could renewed stagnation trigger enough deflation to counter inflation? Or might we get the worst of both worlds—stagflation—as in the 1970s?

We can’t get anywhere with these questions until we agree on the meaning of inflation. At one time the word referred to an increase in the money supply. Over time it came to mean a general increase in prices, an unfortunate turn of events not just because we lost the nice metaphor of an inflating balloon, but also because the shift in meaning tended to obscure the relationship between the two phenomena. Some free-market authors hold out for the old definition, but I suggest this is wasted effort. In my classes I use the phrases “price inflation” and “money inflation” to keep the distinction alive without getting too sidetracked by semantics.

In 1970 Milton Friedman said, “[Price] inflation is always and everywhere a monetary phenomenon.” This is not entirely true but understandable because he was writing at a time when the causal relationship had nearly been forgotten. We can have price inflation without money inflation when there is a supply shock. An overthrow of the Saudi government, for example, might well disrupt the flow of oil from that country. A surging oil price, because it is so important to our economy, would likely pull up the price level with it. In this situation the monetary authorities can help things by doing exactly nothing—letting higher energy prices do the work of encouraging marginal users to cut back. Supply shocks, as such one-time events are called, do not of themselves generate sustained price increases and are therefore not classified as inflation by some economists. 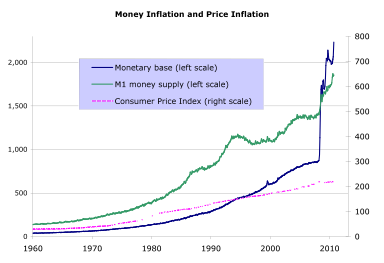 Price inflation of a mild sort can also happen as new and more efficient payment systems are devised. When we acquire debit cards and credit cards, we find it less necessary to hold a supply of money for our daily needs or emergencies. We may reduce not just our currency holdings but also our checking account balances. But money is always in someone’s possession, so an aggregate decline in the demand to hold money results in faster spending, which generates price inflation. Those higher prices motivate people to increase their desired money holdings back to the previous level.

Expectations of future price inflation can also be a source of current price inflation. There is a great deal of inertia in inflation expectations. When there has been a long period of stability we tend to gloss over early signs of inflation, and it takes a long time for people to realize that price rises aren’t just temporary. Likewise, when prices have been rising steadily, people are skeptical of deflationary (or disinflationary) developments. During an inflationary period expectations can run ahead of the money supply. Thus during the German hyperinflation of the 1920s people spent their money faster than the authorities could print it, and almost until the end the authorities denied that money printing was the root of price inflation, believing instead that money creation should be stepped up.

Recently Fed Chairman Ben Bernanke said he was not worried about price inflation because investors are currently paying a very low premium for inflation-protected Treasury securities, adding, “The state of inflation expectations greatly influences actual inflation.” Gerald O’Driscoll, well known in free-market circles and a former Fed official, retorted that Bernanke “has the causation precisely backwards” (TheFreemanOnline, Feb. 28). In fact the causation runs both ways. Market participants try to figure out what the Fed will do, and the Fed tries to figure out how it can influence expectations, and on it goes, back and forth. But as in the stock market, expectations may turn out to be wrong, and in the long run only the fundamentals matter.

What of the converse of the Friedman proposition? If there is money inflation must there necessarily be price inflation? The first chart suggests not. Price inflation got ahead of money inflation in about 1980, as Fed Chairman Paul Volcker’s tight money policy did not at first overcome expectations. But since 2008 the monetary base has exploded without any significant price inflation. Why?

New money created by the Fed first goes to the bank accounts of the parties such as bond dealers from whom the Fed buys assets. Typically banks loan out most of that money because that’s how they seek profits. Bankers normally consider reserves in excess of the level required by the Fed as idle assets, which are to be avoided. Total reserves were around $2 billion until the crisis of 2008, at which time they began to skyrocket. They now exceed $1,100 billion. What motivated this huge increase? First, banks seem not to find a lot of attractive lending opportunities at this time. Second, since 2008 the Fed has been paying interest on reserves, currently a very modest 0.25 percent per year.

Now for the $64 trillion question: What if banks reverse course and start deploying some of those idle reserves? Suppose they find good loan opportunities and jumpstart the pyramiding process? If the M1 money multiplier were to rebound from 0.8 to 1.6, where it stood just three years ago, assuming no change in the monetary base, we would get about $2 trillion flooding into markets. What could the Fed do to head off the price inflation that would follow?

In the past the Fed might have opted to drain reserves by selling Treasury securities. This would depress the price of those securities and raise interest rates—not good for the economy and not good for the Treasury, which counts on selling large quantities of new securities at low interest rates. The Fed now has an alternative that could restrain price inflation by keeping reserves in place. It could raise the interest it pays on reserves. This would discourage banks from expanding their loan portfolios. This latter method can be applied at a keystroke, in contrast to sales of Treasury securities, which takes time. Still, we have to wonder if Bernanke and friends will apply the brakes at just the right time. Given the dynamics of expectations and the uncertain prospects for supply shocks, it will be a difficult trick to say the least. Higher interest rates could wreak havoc on the federal budget. The President’s budget proposal for FY 2012 sees net interest payments rising from about $200 billion for FY 2011 to $928 billion for 2021. As always, the budget is based on optimistic assumptions about tax revenue growth and spending restraint. But it is also optimistic about interest rates. Higher rates could drive interest expense much higher, and because so much outstanding federal debt is of short duration, the effect might happen quickly. 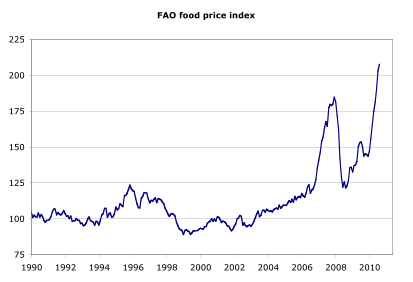 What of current price inflation? Is it really as low as the CPI suggests? It depends where you look. House prices are way down, and housing is part of the CPI. Homeowners are assumed to charge themselves rent, but lucky for them that charge is down. This may be scant comfort to homeowners facing increases in the prices of things they buy for cash, many of which are up.

The stock market has nearly doubled since the low of early 2009. Commodity prices have been soaring. A recent 12-month period saw increases of 31 percent in crude oil, 79 percent in wheat, 166 percent in cotton, 98 percent in rubber, 44 percent in copper, and 94 percent in silver. But natural gas prices fell 23 percent, and olive oil (extra virgin, that is) is off 12 percent. Firms that process these raw materials into retail products typically hedge their positions with futures contracts, but as those contracts expire they will begin paying more for raw materials. Some of those increases are already finding their way into retail prices.

Crude-oil prices spiked to $140 per barrel in 2008, then collapsed. But in late May they again passed $100. A disruption in supplies of Middle East oil could send the price much higher, or a return to stability could send them lower. No one knows. All we know is that crude-oil price changes make their way very quickly into retail gasoline prices. Truckers and others who are sensitive to fuel prices are adding fuel surcharges to their rates. Other effects lag further behind. Should oil remain above $100 we can certainly expect more retail price increases.

Wholesale price increases on foodstuffs have already affected retail prices. The Food and Agricultural Organization’s world Food Price Index has risen dramatically, as the second chart shows. This is becoming a crisis in poor countries, where food takes a large share of personal income. Prices are beginning to rise in the United States as well. Hershey, for example, announced a 10 percent increase across the board, citing increased raw material and transportation costs. The Agriculture Department is projecting a 5 percent price increase this year for a basket of common food items (basics, not chocolate).

What about other retail prices? Walmart CEO Bill Simon, who ought to know, recently said price inflation is “going to be serious.” The news media are full of articles about inflation. The last big U.S. inflation was in the 1970s, but should it heat up we can expect the younger generation to catch on fast—and for expectations to begin to run with or ahead of price increases.

Inflation hawks are inside the gates of the Fed. Kansas City Fed president Thomas Hoenig recently blamed the Fed’s highly accommodative policy for rapidly increasing global food prices and called for an increase in the target Fed funds interest rate to 1 percent in a “fairly short period of time.” Presidents of the Philadelphia, Richmond, and Dallas branches are also considered hawkish on inflation but are opposed by New York Fed president William C. Dudley and by Bernanke himself. Bernanke recently testified that food prices have risen in all currencies, not just the dollar, as if this exonerated the Fed. Markets, after all, are globally connected.

Could China export inflation to the United States? The Communist Party’s new five-year plan is supposed to focus on the well-being of the common folk. This would mean a reduction in the forced savings that have boosted Chinese export industries and thus higher prices for Americans.

The U.S. presidential election is next year, and the political business cycle is with us as ever. The administration, aided and abetted by the Fed, will be doing all it can to reduce unemployment before the election while keeping the lid on price inflation. On the fiscal side there will be no significant budget cuts, which nearly always have negative short-term consequences but benefits that accrue only long after the election.

We would all do well to prepare ourselves, without going overboard, for inflation. Personally, I’m bullish on cat food. Why not stock up on durable goods? Savings accounts pay nothing, and you’re going to consume the stuff anyway.