What the World Can Learn From Canada's Welfare Reform

Welfare reform in Canada was a victory for taxpayers and also good news for poor people who escaped dependency.

Back in 2014, I shared a report that looked at the growth of redistribution spending in developed nations.

That bad news in the story was that the welfare state was expanding at a rapid pace in the United States. The good news is that the overall fiscal burden of those programs was still comparatively low. At least compared to other industrialized countries (though depressingly high by historical standards).

I specifically noted that Switzerland deserved a lot of praise because redistribution spending was not only relatively modest, but that it also was growing at a slow rate. Yet another sign it truly is the “sensible country.”

But I also expressed admiration for Canada.

Canada deserves honorable mention. It has the second-lowest overall burden of welfare spending, and it had the sixth-best performance in controlling spending since 2000. Welfare outlays in our northern neighbor grew by 10 percent since 2000, barely one-fourth as fast as the American increase during the reckless Bush-Obama years.

But I didn’t try to explain why Canada had good numbers.

Now it’s time to rectify that oversight. I went to the University of Texas-Arlington last week to give a speech and had the pleasure of meeting Professor Todd Gabel. Originally from Canada, Professor Gabel has written extensively on Canadian welfare policy and he gave me a basic explanation of what happened in his home country.

I asked him to share some of his academic research and he sent me several publications, including two academic studies he co-authored with Nathan Berg from the University of Otago.

Here are some excerpts from their 2015 study published in the Canadian Journal of Economics. Gabel and Berg explain welfare reform in Canada and look at which policies were most successful.

During the 1990s and 2000s, Canada’s social assistance (SA) system transitioned from a relatively centralized program with federal administrative controls to a decentralized mix of programs in which provinces had considerable discretion to undertake new policies. This transition led to substantially different SA programs across provinces and years… Some provincial governments experimented aggressively with new policy tools aimed at reducing SA participation. Others did not. In different years and by different amounts, nearly all provinces reduced SA beneﬁt levels and tightened eligibility requirements.

By the way, the SA program in Canada is basically a more generous version of the Temporary Assistance to Needy Families (TANF) program in America, in part because there are not separate programs for food and housing.

The study includes this remarkable chart showing a significant drop in Canadian welfare dependency, along with specific data for three provinces. 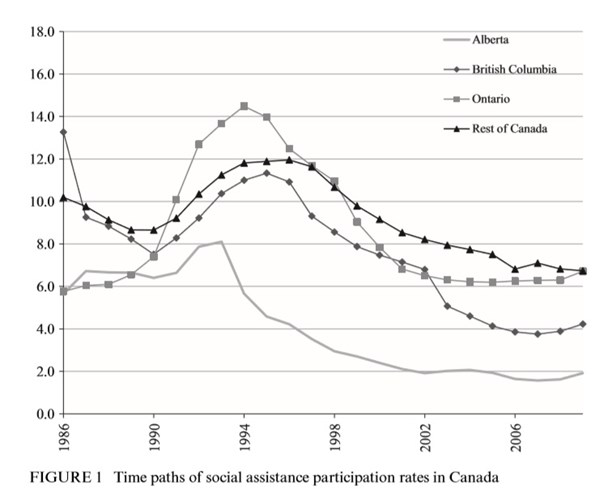 The authors wanted to know why welfare dependency declined in Canada. Was is simply a result of a better macroeconomic environment? Or did specific reforms in welfare policy play a role?

…what role, if any, did new reform strategies undertaken by provinces play in observed declines in SA participation. This paper attempts to address this question by measuring disaggregated effects of new reform strategies on provinces’ SA participation rates, while controlling for changes in beneﬁt levels, eligibility requirements, labour market conditions, GDP growth and demographic composition.

Their conclusion is that welfare reform helped reduce dependency.

…our econometric models let the data decide on a ranking of which mechanisms – reductions in beneﬁt levels, tightened eligibility requirements, improved macro-economic conditions or adoption of new reform strategies – had the largest statistical associations with declines in participation. The data suggest that new reforms were the second most important policy reform after reductions in employment insurance beneﬁts. … In the empirical models that disaggregate the effects of different new reform strategies, it appears that work requirements with strong sanctions for non-compliance had the largest effects. The presence of strong work requirements is associated with a 27% reduction in SA participation.

Here’s their table showing the drop in various provinces between 1994 and 2009. 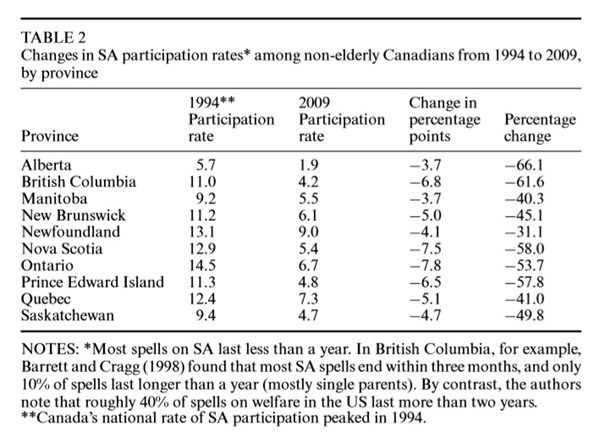 The same authors unveiled a new scholarly study published in 2017 in Applied Economics, which is based on individual-level data rather than province-level data.

Here are the key portions.

Here’s their breakdown of the types of reforms in the various provinces.

And here are the results of their statistical investigation.

Let’s close by looking at data measuring redistribution spending in Canada compared to other developed nations. These OECD numbers include social insurance outlays as well as social welfare outlays, so this is a broad measure of redistribution spending, not just the money being spent on welfare. But it’s nonetheless worth noting the huge improvement in Canada’s numbers starting about 1994. 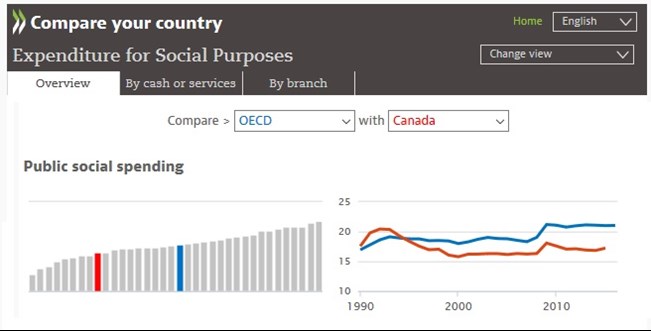 P.S. If it wasn’t so cold in Canada, that might be my escape option instead of Australia.

P.P.S. Given the mentality of the current Prime Minister, it’s unclear whether Canada will remain an economic success story.