The NYT Says Dads Aren't Pulling Their Weight. Are They Right?

Are dads shirking their duty by committing less time to child care or is there something else at play?

The New York Times recently ran an article that suggests fathers are shirking their share of chores in the home.

The article, which bears the headline “What ‘Good’ Dads Get Away With,” states that while men have improved in recent decades, they still fall woefully short in the proportion of housework they bear, particularly child care.

“The amount of child care men performed rose throughout the 1980s and ’90s, but then began to level off without ever reaching parity,” writes Darcy Lockman, author of the forthcoming All the Rage: Mothers, Fathers, and the Myth of Equal Partnership. “Mothers still shoulder 65 percent of child-care work.”

Though the term toxic masculinity is never used in the article, the idea is implied.

Though many men are in denial about it, their resistance communicates a feeling of entitlement to women’s labor. Men resist because it is in their “interest to do so,” write Scott Coltrane and Michele Adams, leaders in the field of family studies, in their book, “Gender and Families.” By passively refusing to take an equal role, men are reinforcing “a separation of spheres that underpins masculine ideals and perpetuates a gender order privileging men over women.”

The article struck a nerve for me. I’m all-too-aware that in our household, my wife does more housework than I do. Sure, I drop off our three children in the morning. I load and unload the dishwasher (a seemingly endless duty). I mow the grass, trim the trees, clean the gutters, and shovel the snow. As the family’s renowned grill man, I can even say I split cooking duties.

But all of this pales in comparison to the work my wife does, which consists of so many tasks I won’t even attempt to enumerate them here. How she juggles everything, I’ll never know. To all this, I must add that my wife works full-time and makes more money than I do. So I can’t even fall back on the traditional patriarchal arguments (if I was actually inclined to do so).

What the NYT leaves out

Ms. Lockman suggests society in general and men in particular should feel guilty for the imbalance in housework, which she calls “the most important equity issues of our time.” But it’s worth noting that The Times omits a key part of the story.

Data revealing that mothers bear the brunt of housework also show that fathers, on average, put in about 60 percent more paid hours of work than mothers. The Pew Research graph below offers a breakdown of the average number of hours mums and dads spend on housework, child care, and paid work. (A h/t to Christina Sommers for pointing this out.) 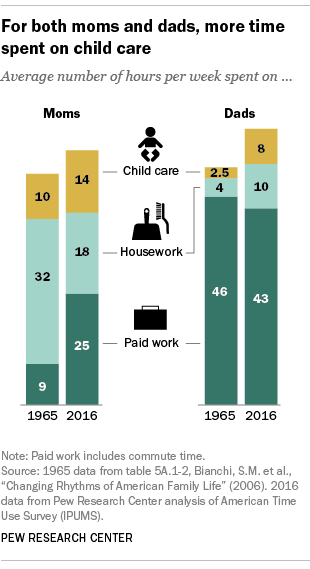 One can argue that spending additional hours at the office does not absolve fathers of their responsibilities in the home. However, to entirely ignore the fact that fathers are, on average, spending 60 percent more paid hours working than mums is a grave omission, one that undermines both quality journalism and science.

Many people reading The Times article were no doubt left with the impression that while mums are toiling in the home, the men are off golfing and smoking cigars. In actuality, fathers are working more total hours per week—child care, housework, and paid work combined—than mothers, according to the data.

We hear a great deal today about work-life balance. Finding that happy medium is not easy for most of us, I suspect, men or women. The truth is people and families all have unique stresses and points of focus.

My wife, as I mentioned, earns a higher income than I do; but I actually work more hours. Why? Because my attention is often drawn to my work, or things that are ancillary to it. My wife, on the other hand, rarely frets about work at home. She’s too focused on swiffering a floor (that looks perfectly clean to her husband), vacuuming the living room, or picking up kids’ toys.

The truth is there is no perfect division of labor in the home. And efforts to create one are bound to breed more resentment than happiness.

Different people are going to struggle with work-life balance in different ways. And it’s true that if one person in a relationship neglects tasks, it can be harmful. But the key to achieving balance is not striving for absolute parity in hours worked—child care, housework, and paid—across gender lines. Not because evidence exists that suggests that such a path leads to higher divorce rates, though it does, but because people are individuals.

A Lesson in Individual Choice

The truth is there is no perfect division of labor in the home. And efforts to create one are bound to breed more resentment than happiness.

Instead of striving for collective parity, mothers and fathers would be better off communicating more effectively with one another. Ask for help when needed, learn to better anticipate a partner's needs and desires. Listen to each other.

That sounds simple, but the best things in life often are. 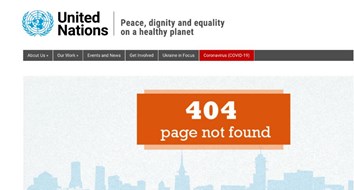