What Streaming Services Teach Us about Economics

The proliferation of streaming services provides valuable illustrations of core concepts in economics. 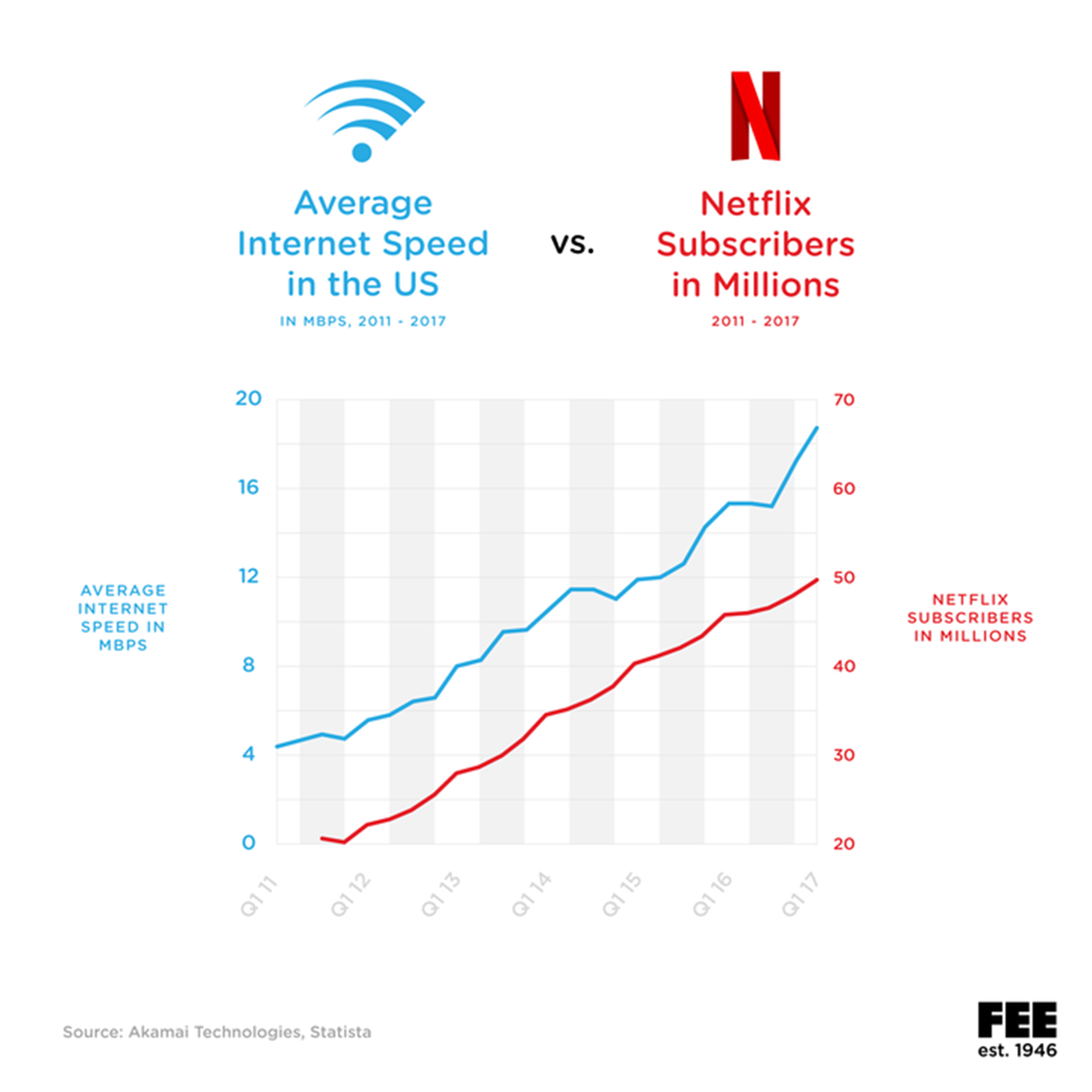 “Fifty-seven channels and nothing on” is an adage and a so-so Bruce Springsteen song from the ‘90s. Obviously, he is talking about cable TV and the supposed paradox that there is a plethora of choices but no worthy ones. Of course, it wasn’t the case that there was never anything good to watch, but with regular TV, the time when the content is offered has to coincide with when the viewer wants to watch it. So if Die Hard or Home Alone is at 8 pm while I am at the gym—tough luck.

Markets are sometimes treated as magical, nebulous concepts by people who adore them, as well as those who abhor them. But in reality, the market is just space where buyers and sellers come together to trade. This coming together is key. If there are no reliable roads or other means to transport tomatoes from the orchard to the city, the buyers and sellers will never meet, and the market for fresh tomatoes will simply not materialize. You might have a bumper crop in the countryside, a lot of hungry people in the cities, and no market for tomatoes.

In the same way, streaming services are pretty much impossible without fast and cheap internet. Just as railroads brought large swaths of the country together in the 19th century, the internet is bringing consumers of content and producers of content together in the digital marketplace. Connections make markets larger and allow people with similar tastes to exert enough demand to allow for the creation of even the most niche content. In fact, large markets enable a variety and diversity of tastes and preferences rather than destroying them (as my colleague Jen explains).

Without fast, cheap, and reliable internet, streaming services would not be what they are now. Few remember that Netflix started as a company that would mail you the latest movie (as my colleague Sean explains here).

Without fast and secure payment processing, ordering and canceling services would be like experiences at the DMV. Without modern TVs, which are more like very large tablets, rather than traditional TVs, you would have to purchase additional products, cables, or computers to make streaming possible. Sure, some people would still do it, but it would not be as widespread, and the markets would be smaller.

The lower the transaction costs, the easier it is for buyers and sellers to come together.

In other words, the lower the transaction costs, the easier it is for buyers and sellers to come together. This is how cheap and reliable telecommunication allowed companies providing over-the-phone consultation to hire English speakers in the largest English-speaking country—India—rather than where they are located. Cheap, fast, and reliable shipping allowed companies to move their labor-intensive production to the country with an abundant labor force– China. This is how people and companies can specialize in what they do best.

Conversely, if you increase transaction costs⁠—e.g. start taxing the internet, cables, communications, or shipping⁠—all of the aforementioned markets will shrink, and fewer people will join up to work together.

People who both adore and abhor markets sometimes fear that some successful companies would grow big and outcompete (or merge) with everyone else. Think about it. The Mandalorian cost $100 per minute to produce. The more people who subscribe to Disney+ to watch The Mandalorian, the less the costs per subscriber. If only 100 people subscribed to Disney’s streaming service, the subscription cost would have to be a ridiculous $1 per minute for Disney to even break even. Conversely, the more people you have subscribing, the more you can splurge on the next big hit, which would attract even more customers, and so on.

Then, as the logic goes, because large companies like Netflix or Disney have smaller costs per customer, and because customers value large companies that offer more things to watch per your fixed subscription, the largest company will ultimately win. There can be only one, as they say (for those of us old enough to remember The Highlander).

Markets show that people can and will work together without any direction from—or need for—politicians, and that’s the ultimate competition if you are a politician.

Some economists call this type of situation a “natural monopoly,” meaning certain markets will inevitably become monopolies. Some politicians ask “why wait? and issue laws that prohibit competition and create monopolies right away. This has happened many times in many markets—from trash collection to electricity. Often, the next step is to nationalize the monopoly and hand it over to the government.

Luckily enough, no one is yet proposing to ban competition in streaming services, create AmazDisNet, and have the government run it (emphasis on yet). While I doubt that anyone sane is drafting articles on how Netflix is an “essential service” or “too important” to be left to private business, I bet someone is already complaining that Netflix and Disney are “too big” to be left without politicians interfering.

Markets and free competition are beautiful because they allow individuals and companies to find new ways to satisfy customers. They are horrible to some established businesses because they prevent them from cornering the market and reaping profits. Markets show that people can and will work together without any direction from—or need for—politicians, and that’s the ultimate competition if you are a politician.

The proliferation of and competition between all these new streaming services allow us, the consumers, to watch what we want whenever or wherever we want for a fraction of the price of the movie ticket. By logging in, we are directly working with actors, directors, writers, and designers. Let’s hope this beautiful cooperation lasts.