There are zero genuine cuts. Instead, spending increases by an average of 3.5 percent annually.

Today is the 10th anniversary of International Liberty, and I was initially tempted to commemorate the day with another introspective column.

But I decided on a different focus because I just read a story that combines two things—wasteful spending and Washington dishonesty—that I don’t like.

Let’s look at the article, which was published in The Hill.

The Senate Budget Committee on Thursday approved a GOP-backed budget resolution that would allow for draconian spending cuts by reducing both defense and nondefense spending for 2020. …The Senate’s budget sticks to the legal caps for defense — falling from $716 billion to $643 billion, including off-book funds — and nondefense, which would drop from $640 billion to $542 billion. …The spending blueprint also would decrease spending on Medicaid, children’s health insurance and Affordable Care Act subsidies by $281 billion, and on Medicare by $77 billion. “…this is a disastrous budget for the middle class and working families of this country,” said Sen. Bernie Sanders (I-Vt.), the panel’s ranking member.

I was initially semi-excited when I read the story.

After all, we desperately need “draconian spending cuts” in Washington.

But I was only “semi-excited” because I feared—based on past experience—that these supposed reductions were fake.

So I decided to look at the actual numbers in the Senate’s proposed budget.

Lo and behold, my skepticism was warranted. There are zero genuine cuts. Instead, spending increases by an average of 3.5 percent annually under the Senate’s “draconian” budget plan. 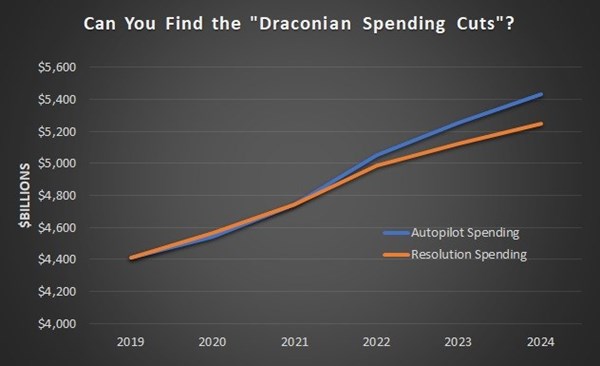 Politicians claim there are “cuts” because spending levels in the Senate plan (orange line) don’t rise as fast as what would happen if spending were left on autopilot (blue line).

But this simply means that the burden of government spending won’t grow as fast as previously planned. I’ve exposed this scam in discussions with John Stossel and Judge Napolitano.

And I’ve condemned The Washington Post for playing this dishonest game, as well. You also won’t be surprised that Obama used this dodgy approach.

The political elite can pretend they are fiscally responsible while simultaneously making government bigger.

The political elite like this dodgy game because they can pretend they are fiscally responsible while simultaneously making government bigger.

The bottom line is that politicians should be honest. If they want to argue that spending should grow 3.5 percent yearly (or even more), they should explain why Washington deserves more money.

But don’t lie to us about supposed spending cuts when the budget is expanding.

P.S. Remember the “sequester”? Politicians and interest groups squealed that the world was going to end because of an automatic spending cut that wasn’t even a cut.