What America Could Learn from Singapore's Social Welfare System

To take a look at how and where a minimal standard of welfare design has been implemented successfully, one need only look at the city-state of Singapore. 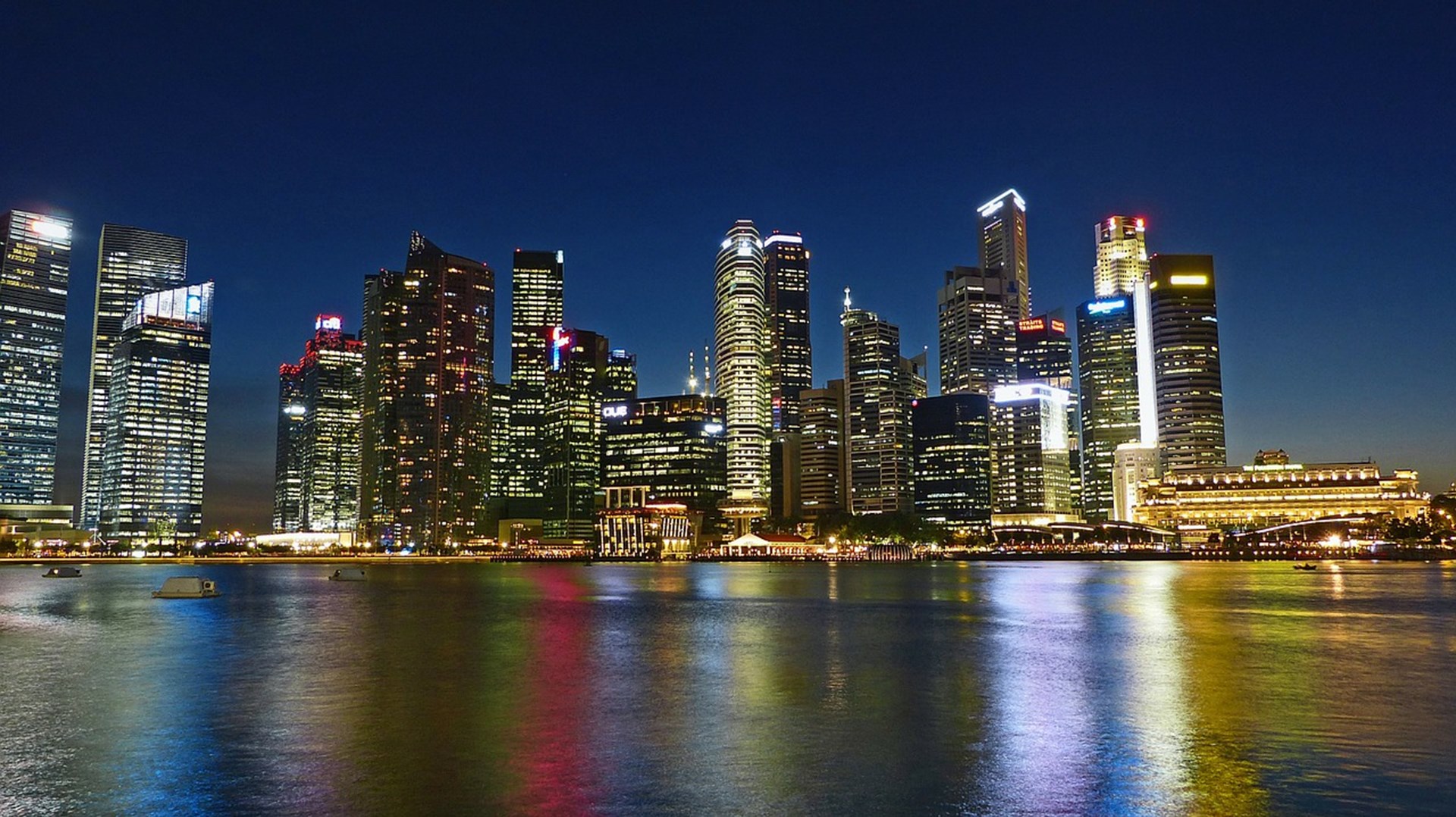 A common libertarian view when it comes to welfare is that the role of the state should simply be restricted to providing a safety net. Such a basic net would guard society’s most economically vulnerable against falling through the cracks. Milton Friedman proposed a negative income tax as a way of encouraging the poor to work their way out of poverty. In one of his most oft-quoted passages (for reasons of ideological axe-grinding, no doubt), F. A. Hayek similarly espoused such a view in The Road to Serfdom:

There is no reason why, in a society which has reached the general level of wealth ours has, the first kind of security should not be guaranteed to all without endangering general freedom; that is: some minimum of food, shelter and clothing, sufficient to preserve health. Nor is there any reason why the state should not help to organize a comprehensive system of social insurance in providing for those common hazards of life against which few can make adequate provision.

It is clear why this policy is consistent with a free-market-oriented philosophy: It understands that the wealth of nations are retarded when incentives to work are eroded by easily accessible state welfare. At the same time, it does not dogmatically apply the pure logic of economic efficiency within a political vacuum. This view forgoes any grand illusions about big modern governments possibly abolishing its bloated welfare state bureaucracy and realizes that real-world social problems like unemployment and homelessness can potentially spur democratic backlashes and lead to worse anti-market outcomes.

To take a look at how and where such a minimal standard of welfare design has been implemented successfully, one need only look at the city-state of Singapore. The Singapore welfare system is considered one of the most successful by first-world standards. World Bank data shows that Singapore’s government health expenditure in 2015 is only 4.3 percent of GDP, a small fraction in comparison to other first-world countries—16.9 percent in the US; 11 percent in France; 9.9 percent in the UK; 10.9 percent in Japan, and 7.1 percent in Korea—while achieving comparatively equal or better health outcomes of low infant mortality and higher life expectancies. While most of Europe, Scandinavia, and North America spend 30-40 percent of GDP on social welfare programs, Singapore spends less than half as much while maintaining similar levels of economic growth and a society relatively free of social problems.

An Emphasis on Self-Reliance

The first thing to know about Singapore’s welfare system is that qualifying for welfare is notoriously difficult by the standards of most of the developed Western world. The Singapore government’s position on welfare handouts is undergirded by a staunch economic philosophy of self-reliance and self-responsibility where the first lines of welfare should be derived from one’s individual savings, the family unit, and local communities before turning to the government. The state, in other words, should not act as a guarantor of means but merely a guardian of final recourse.

One of the most substantial organizational forms of welfare in Singapore are the state-guided self-help community groups that are structured along racial lines. They were formed to help tackle poverty alleviation for the lowest-income citizens by helping them through various schemes of general education to improve their economic opportunities. This welfare program started within the Malay community in 1981 and was deemed so successful by the end of the decade that the government gradually expanded it to form similar self-help organizations for the “under-performing” groups of the Chinese, Indian, and Eurasian races, too.

Funding is derived from a mixture of government schemes that draw a token sum of one to two dollars from each citizen’s government savings account (in other words, crowdfunding), as well as encouraging optional charity from the general community.

The Singapore government’s involvement in these community groups goes only as far as a general regulatory oversight. Unlike typical welfare states, funds for these welfare organizations are not mechanically funneled from a large taxpayer-funded pool into an ever-increasing bureaucracy. Instead, funding is derived from a mixture of government schemes that draw a token sum of one to two dollars from each citizen’s government savings account (in other words, crowdfunding), as well as encouraging optional charity from the general community.

Most importantly, the discretionary processes involved with allocating welfare to the low-income members are left to the community group leaders. This privatized form of welfare where key decision-making is carried out at a decentralized level has proved to be a far more economically efficient form of welfare.

This philosophy of self-reliance and responsibility is prominent not only in social welfare but is also replicated in the Singapore government’s approach to retirement savings, health care, education, and housing. For instance, the state’s preferred policy of ensuring individuals have sufficient resources for a rainy day is via the Central Provident Fund, a government-mandated savings account where a portion of one’s monthly salary is deducted and deposited into it. These funds can be used only for health expenses/insurance, the purchase of a home, or at the age of retirement, reflecting the government’s encouragement of self-reliance where you should “help yourself before asking others for help.”

By compelling Singaporeans to save, welfare in Singapore has traditionally been internalized first to the individual and the family/grassroots level. This forms the crux of the government’s “Many Helping Hands” social policy where the role of the family and immediate community in welfare provision is emphasized over government-funded programs. Such a form of privatized charity is neither new nor unique, as a wealth of research shows how mutual aid societies predated modern welfare states in the 20th-century United States and the 19th-century United Kingdom.

There is an important lesson to be drawn from the Singaporean case study. The success of the Singapore government’s approach to welfare stems from its decentralized design that revolves around communities at the grassroots level. This approach has worked well because it fundamentally overcomes critical knowledge problems that welfare programs have to deal with.

Remember that poverty alleviation is just that: alleviation. Softening economic hardship temporarily is entirely different from the goal of uplifting the poor out of poverty. Welfare that is efficient must perform the former without encouraging dependency or destroying the incentive for the poor to work. Even if poverty is a collective problem for “society,” the knowledge required to solve individual cases of poverty is never collectively centralized in a state bureau. On the contrary, such knowledge is widely dispersed and would differ radically across different cultures, religions, communities, occupations, and individuals.

The causes of social poverty can stem from persisting cultural practices, personal habits, or other local institutional problems. Such contextual knowledge and incentives are rarely available to far-removed government welfare bureaus. It is easy to place the duty of welfare provision on an abstract entity we call the “government.” But it is often far more complex for state bureaucrats to allocate taxpayer-funded welfare efficiently, as seen by the trillions of wasted dollars that have failed to help the poor or the gargantuan costs wasted in merely administrative purposes in the US welfare state.

When decision-making is decentralized, the unique circumstances and life stories of each individual can be better assessed, thereby also offering a more robust safeguard against potentially opportunistic welfare recipients.

Effective welfare programs that are managed at a private, decentralized level are better equipped with the contextual knowledge required to cope with the existing environment. When decision-making is decentralized, the unique circumstances and life stories of each individual can be better assessed, thereby also offering a more robust safeguard against potentially opportunistic welfare recipients. Singapore’s hybrid private-public model of welfare provision offers useful lessons to those who believe that comprehensive welfare programs can be easily designed to eliminate poverty in a stroke. Such simplistic views stem from undeniably benevolent intentions. But poverty alleviation will be far better tackled through a market-based approach that recognizes the epistemological limits of policymakers, as Singapore’s decentralized approach has shown.

Donovan Choy is a graduate student at the CEVRO Institute and member of Adam Smith Center Singapore. You can contact him at [email protected].