We See the Glass as Half Empty, Yet Our Cup Is Overflowing

From America to China to India, the spread of western ideas is proving to be beneficial for everyone.

It is perhaps an understatement to say that we live in an era of great pessimism. This pessimism, while not distributed evenly across the world, appears to be felt most acutely in many Western countries, including the United States. Some two-thirds of Americans, for example, feel that the United States is heading in the wrong direction and the two main candidates for the presidency exacerbate, rather than soothe, the feeling of national gloom.

Americans feel poorer, even though their GDP per capita has never been higher. We feel less safe, even though international conflicts have almost disappeared and deaths from terrorism are extremely rare. Overall life expectancy is at an all-time high and progress is being made in curing cancer, Alzheimer’s disease, and HIV/AIDS.

Globally, the speed of improvements in human well-being is staggering. Fueled by its embrace of capitalism and globalization, Chinese per capita income has grown by an incredible 900 percent in my lifetime. During that time, Indian life expectancy rose by a third – from 52 years to 68 years. These two countries contain close to 3 billion people and their improving living standards ought to be cause for celebration, not resentment. Intellectual Enlightenment is on the rise, replacing traditions and superstitions with reason and empiricism.

Luckily, a small, but influential, group of optimists has been trying to cheer us up. The late Julian Simon got the ball rolling with the publication of The Ultimate Resource in 1981 and The Ultimate Resource II in 1996. Indur Goklany’s The Improving State of the World: Why We’re Living Longer, Healthier, More Comfortable Lives on a Cleaner Planet came out ten years later, Matt Ridley’s The Rational Optimist followed in 2010 and Ronald Bailey’s The End of Doom: Environmental Renewal in the Twenty-first Century came out last year.

The list of optimists, which also includes a list of such luminaries as the economic historian Deidre McCloskey, Nobel Prize-winning economist Angus Deaton, environmentalist Bjorn Lomborg, psychologist Steven Pinker, economist Max Roser and statistician Hans Rosling, has just grown longer with the publication of Johan Norberg’s Progress: Ten Reasons to Look Forward to the Future. It is a must-read for anyone interested in the realistic picture of the state of humanity.

Norberg, a Swedish writer and Cato Institute Senior Fellow, has looked at the state of the world from global food supply to child labor. He found that:

“Despite what we hear on the news and from many authorities, the great story of our era is that we are witnessing the greatest improvement in global living standards ever to take place. Poverty, malnutrition, illiteracy, child labor and infant mortality are falling faster than at any other time in human history.

Life expectancy at birth has increased more than twice as much in the last century as it did in the previous 200,000 years. The risk that any individual will be exposed to war, die in a natural disaster, or be subject to dictatorship has become smaller than in any other epoch. A child born today is more likely to reach retirement age than his forbearers were to live to their fifth birthday.”

And what were the reasons for the massive improvements in global standards of living? First, Norberg credits intellectual Enlightenment, which replaced traditions and superstitions with reason and empiricism. Second, he points to the ideas of classical liberalism, which replaced serfdom and authoritarianism with individual liberty and liberal democracy. Last, but not least, Norberg notes the role played by the Industrial Revolution in replacing hunger and poverty with prosperity and abundance.

The improvements that Norberg writes about started in the West – the home of Enlightenment, classical liberalism and Industrial Revolution. As such, the West got a head start and powered ahead of the rest of the world. Inequality, as Angus Deaton wrote in his book The Great Escape: Health, Wealth, and Origins of Inequality, was the “price” that humanity had to pay for progress. Without the Western “escape” from poverty, the rest would have none to emulate.

Western Civilization Is Contagious. And So Is Its Success.

Over time, the gap between the West and the rest grew larger, reaching its apex at the start of the 20th century. But then, as Western ideas and inventions spread across the world, the gap started to narrow. The global economy is not a fixed pie. China’s economic successes do not translate to American losses.Academic researchers—from Xavier Sala-i-Martin of Columbia University to Surjit Bhalla, formerly of the Brookings Institution and Rand Corporation, to Paolo Liberati of the University of Rome—all agree that global inequality is declining.

Maybe it is too much to ask of people living in the West to feel gratified by the improvements experienced by people across the globe. Quite understandably, our point of reference is not a global, but national, standard of living.
And clearly, the speed of improvements has been uneven. Just consider the tremendous progress that China has made – at least in terms of its economy rather than its openness to democracy – since it embraced free markets in 1978, versus improvements experienced by Americans over the same time period: 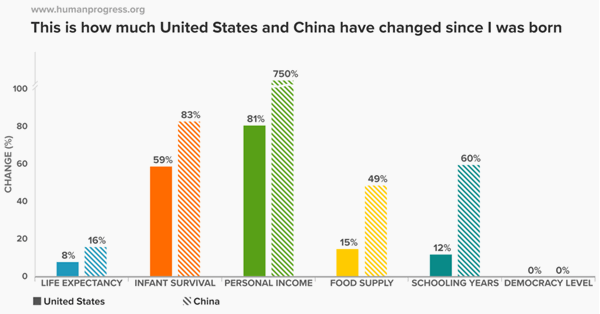 But the global economy is not a fixed pie. China’s economic successes do not translate to American losses. In spite of what Donald Trump says, for example, the output of the American manufacturing sector is at an all-time high. The same cannot be said about employment in that sector, which has declined. But many of those manufacturing jobs were difficult and dangerous. There is no point romanticizing them in the same way that people in the midst of the Industrial Revolution romanticized the agricultural past. Moreover, many of the jobs lost in the US manufacturing sector have not “gone” to China. They were lost to robots, computers, and other efficiencies.

As it comes to election time, the American electorate should insist not that the United States punish China for its success by erecting barriers, but that our decision makers create an economic environment – low and simple taxation and unobtrusive regulatory regime – that will make rapid growth in the United States possible again.