Was 2016 Really So Bad, or Are You Too Caught Up in the News Cycle?

If your mental image of 2016 is Donald Trump’s face, you may have a problem.

On New Year’s Eve, many said “Bye Felicia” (today’s meme version of “good riddance”) to 2016. Some called the year a dumpster fire. People I know expressed such sentiments on social media. Yet I know for a fact that many of them had splendid years: a new job, a new love in their life, a childbirth, etc. They had every reason to celebrate the good fortune of their past year, but instead looked back on it as an awful ordeal.

2016-haters dwell on a seeming uptick in celebrity deaths, ascribing homicidal agency to the chronological unit. And opponents of Donald Trump see his presidential election as a bizarre blight on the year. Then there was the turmoil and violence in America and around the world, much of which seemed to cluster in the summer of 2016: civil wars, geopolitical crises, terrorist attacks, mass shootings, police-related killings, mass protests, etc. I myself remarked on July 19, referring to a song by Billy Joel:

“You know things are bad when you could fill a whole “We Didn’t Start the Fire” verse just with news stories from the past two weeks.”

And indeed, for many people, especially those who didn’t survive the events in question, things were bad. Yet, for many others, life was very good. Innovations in markets and technology continued to increase living standards throughout the world. I myself, in addition to being very fortunate in terms of my career, relationships, and health, possessed a number of useful and delightful new gadgets and apps that hadn’t been available even to the ultra-rich just a few years ago.

They say “misery loves company,” and empathy certainly is important, but it does suffering strangers no good to be vicariously miserable along with them. Many of us are not fully appreciating and enjoying our blessings, because we live so much of our mental and emotional lives in the news cycle.

If the image that springs to mind when you think of 2016 is the face of Donald Trump, as opposed to the faces of your family or what you accomplished that year, you may have a problem. In 2017, you might resolve to follow the news less closely, or at least rethink your relationship with it. Resolve not to be distracted by things you have no control over. Resolve to instead dedicate that scarce attention to loving more, creating more, living better, and cherishing every day of your life.

Then next New Year’s Eve, you’ll have a healthier perspective on what transpired. And in the meantime, you’ll be more focused on making a year of your life worth celebrating. 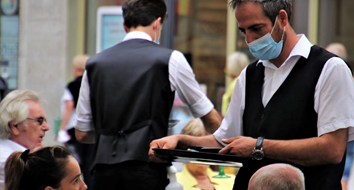 Employers May Want to Stop Humiliating “the Help” with Mask Requirements