Sadly, people are motivated by penalizing the rich rather than helping the poor.

I’ve repeatedly argued that there are two Social Security crises. The one most people know about is the fiscal crisis. Simply stated, the program is bankrupt.

But you don’t have to believe me. Here are some excerpts from a CNBC column.

…Despite the huge numbers, there’s even a less generous way of looking at the fiscal shortfall. A projection, known as the “infinite horizon,” takes into account all the program’s future liabilities, even those beyond the 75-year period that Social Security actuaries typically use in their calculations. Under the infinite horizon, Social Security will have $32.1 trillion in unfunded liabilities by 2090, $6.3 trillion more than last year’s projection.

By the way, the projections cited above are based on “present value,” which is calculated by predicting how much money would have to be set aside and invested today to finance future promises.

But that’s not how budgets work. At least not for pay-as-you-go systems like Social Security.

I prefer looking at inflation-adjusted estimates of cumulative deficits. On that basis, the 75-year unfunded liability is $37 trillion. 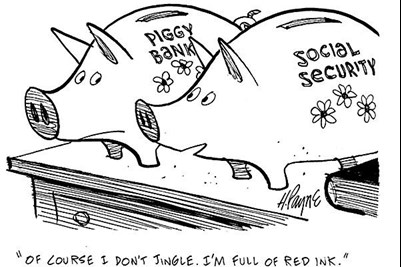 The “infinite horizon” number presumably would be even scarier.

Oh, and don’t be under the illusion that the “Trust Fund” will solve the problem. It’s nothing but a pile of IOUs.

The second crisis is that Social Security is a bad deal for workers. They have to pay an enormous amount of taxes into the program during their working years, yet the monthly benefits they are promised are far lower than they could get if they had been able to put the same money into personal retirement accounts.

An analysis in the New York Times correctly points out that some groups with low lifespans are particularly disadvantaged by Social Security.

Social Security is designed…as an equalizer between rich and poor. It is structured to give more generous retirement benefits to low-income people, given the taxes they pay during their working years.

…But in reality, a large body of research shows that the rich live longer — and that the life span gap between rich and poor is growing. And that means that the progressive ideal built into the design of Social Security is, gradually, being thwarted. In some circumstances, the program can actually be regressive, offering richer benefits to those who are already affluent. …because different groups of people have different life expectancies, some groups receive more value from every dollar of payroll taxes they and their employers pay into the system. Over all, women live longer than men and African-Americans die younger than whites.

… the Social Security retirement system as a whole is regressive, or more favorable to the affluent than to the poor. …the richest 1 percent of Americans gained three years of life expectancy from 2001 to 2014 alone, while the poorest had almost no gain (0.3 of a year). For anyone who believes that it’s important for the Social Security program to remain progressive, the life-span shifts have big implications that are made more acute by the program’s financial problems.

I’m not motivated by having Social Security “remain progressive,” but I fully agree that it’s bad policy to have government programs that are especially harmful for poor people. 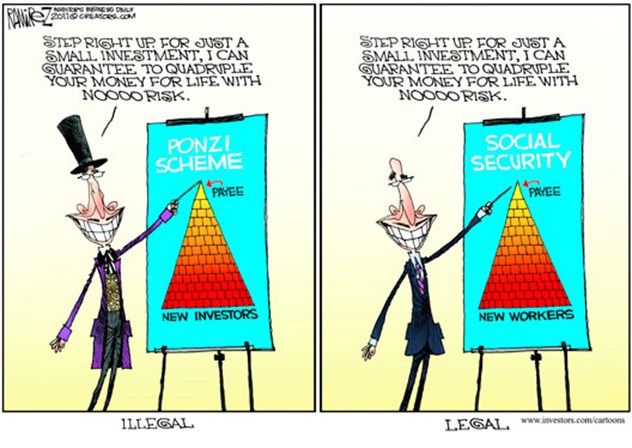 The obvious solution to both crises is personal retirement accounts. We should copy nations elsewhere that have successfully transitioned to systems based on real savings rather than empty political promises.

But some of our friends on the left think that the answer is to make the program even worse for higher-income taxpayers, even though this doesn’t change the fact that the program is a bad deal for lower-income taxpayers. Hillary Clinton embraced this approach during last year’s campaign (as did Obama in 2008).

Moreover, many Democrats in Washington are lurching even further to the left.

…congressional Democrats…have embraced an ambitious but flawed policy of expanding the program’s benefits via tax increases on all workers, including doubling payroll taxes on high earners.

…today’s Democrats…would boost the initial benefits Americans receive upon retirement, and pay larger cost-of-living adjustments, or COLAs, in the years after. Over the plan’s first 10 years, Social Security benefit payments would rise by almost $1.2 trillion, according to an analysis by Social Security’s actuaries. To fund those higher benefits, the plan would increase the Social Security payroll rate from the current 12.4% to 14.8% between 2019 and 2042. The plan also would phase out the ceiling on earnings subject to the tax, currently $127,000, so that by the mid-2030s all earnings would be taxed. For low- and middle-income workers, lifetime payroll taxes would rise by nearly one-fifth from current levels.

…the effective top federal marginal tax rate on earned income (inclusive of Medicare taxes and limitations on deductions) would rise from the current 44.6% to 59.4%. State income taxes could boost the total marginal rate as high as 72.7% for California residents. Under the Democrats’ Social Security plan the U.S. would have, by far, the highest top marginal tax rate in the developed world.

And higher tax rates would be bad news.

…employers who are required to pay higher Social Security taxes would reduce wages to help cover those costs. …According to a recent analysis by the Joint Committee on Taxation, lost income and Medicare taxes would offset between 12% and 21% of workers’ Social Security payroll tax increases, depending on income level.

…Left-leaning economists Emmanuel Saez and Jeffrey Liebman found in a 2006 study that even modest behavioral reactions could reduce the net revenue gains from a plan like Mr. Larson’s by nearly half. Assume stronger behavioral effects (specifically, an elasticity of taxable income of 0.5), and losses to non-Social Security revenue would, in the authors’ words, “swamp any benefits from the increase in payroll tax revenue.” In other words, the Democrats’ Social Security reform could increase government deficits and debt, permanently.

To augment this research by Biggs, let’s look at an academic study that estimates how government entitlements push older people out of the labor force, which is bad for them and bad for the overall economy.

Baby Boomers appear at risk of suffering a major decline in their living standard in retirement. With federal and state government finances far too encumbered to significantly raise Social Security, Medicare, and Medicaid benefits, Boomers must look to their own devices to rescue their retirements, namely working harder and longer. However, the incentive of Boomers to earn more is significantly limited by a plethora of explicit federal and state taxes and implicit taxes arising from the loss of federal and state benefits as one earns more. Of particular concern is Medicaid and Social Security’s complex Earnings Test and clawback of disability benefits.

…We find that working longer, say an extra five years, can raise older workers’ sustainable living standards. But the impact is far smaller than suggested in the literature in large part because of high net taxation of labor earnings. We also find that many Baby Boomers now face or will face high and, in very many cases, extremely high work disincentives arising from the hodgepodge design of our fiscal system. …we find that traditional, current-year (i.e., static) marginal tax calculations relating this year’s extra taxes to this year’s extra income are woefully off target when it comes to properly measuring the elderly’s disincentives to work. Our findings suggest that Uncle Sam is, indeed, inducing the elderly to retire."

Interestingly, there are some honest folks on the left who support personal accounts. Here’s an article on the “progressive case for privatizing Social Security in the US.”

…privatization is an underrated idea, and progressives who oppose benefit cuts should be fighting for it. …With private accounts, the system would be much more transparent. Currently, for every $1 a middle-earning couple (born in 1985) pays into Social Security, they can expect $1.01 back in benefits when they retire. That’s not a great return on investment, and it may fall in the future because Social Security isn’t on track to keep paying this level of benefits. If the government cuts benefits enough to make the program solvent they’d only get $0.80 for every $1 they pay in.

…private accounts would change the conversation about entitlements. It clarifies what people expect to earn in retirement. …private accounts should appeal to those on the left who value a generous social safety net.

Honest folks on the left should look around the world and see how personal accounts are good news, both for workers and the overall economy. Heck, just compare these two charts on the United States and Australia.

Sadly, we have too many statists who are motivated by penalizing the rich rather than helping the poor.

The U.S. came very close to having private retirement accounts as part of a sweeping Social Security reform…under President Clinton. That surprising bit of news comes 18 years after the fact in a reminiscence by Cato Institute senior fellow Jose Pinera, who once upon a time served as Chile’s secretary of labor and social security, and who designed that country’s highly successful pension reforms in 1980. Pinera says that Clinton began thinking in earnest about privatizing part of Social Security back in 1995…

According to Pinera, Clinton saw private accounts as a way to cement his presidential record as a reformer. And the model for doing so that he had in mind was from Chile, where Pinera and a group of reformers created private retirement accounts that helped fuel that nation’s decade-long growth boom. It was a rousing success. Clinton even sent his former chief of staff, Mack McLarty, to Chile in 1996 to see how private personal accounts worked. In a letter to Pinera, he talked about how impressive Chile’s program was…

Three years later, in December 1998, Pinera attended a White House conference on Social Security reform. There, he outlined the simple elements of the Chilean Model… It must have struck a chord with Clinton. Just one month later, in his 1999 State of the Union address, he proposed what he called “USA accounts,”… Every American would have had a private savings account, funded by a portion of his or her payroll taxes. …But it was not to be. Clinton’s involvement in the Monica Lewinsky scandal and his subsequent impeachment for perjury and obstruction of justice derailed his plans.

Having been very involved in the Social Security debates back in the last 1990s, I can vouch for this. Clinton was remarkably sympathetic to reform and almost always gave the right answers when discussing the issue (not too surprising since he compiled a remarkably pro-market record).

Unfortunately, the Lewinsky scandal and impeachment fight poisoned the political environment for bipartisan reform. Who would have thought that a sexual dalliance could have killed an opportunity for much-needed reform. That was the most expensive you-know-what in world history.