US Income Inequality Fell Sharply since the Great Recession

The poor and middle classes weathered the recession much better than the rich.

The disappointingly slow economic recovery from the Great Recession has a silver lining: inequality has decreased across the United States. According to a recent report by Brookings Institution economist Gary Burtless, left-leaning economists like Emmanuel Saez have painted an unnecessarily dire picture of the Great Recession and American inequality.
Burtless found that when one accounts for the effects of taxes and welfare transfers, most groups saw far less extreme income losses than Saez claimed. The very poorest Americans actually saw income gainsduring the Great Recession. 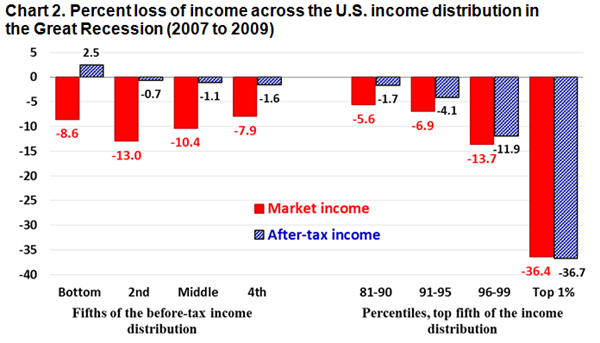 The middle class also did much better than Saez found by looking at market income alone. As Burtless explains,

Among households in the middle fifth of the before-tax income distribution, average market income fell more than 10 percent in the Great Recession. If we include government transfers in the income definition, average income fell 4.4 percent. If we account for the federal taxes families pay, average net income fell just 1 percent.

Since America’s middle and lower class suffered relatively small losses, and the brunt of the recession was borne by the richest Americans (a far more diverse group than you might think, with high turnover), the result has been a decrease in total inequality.

According to the Congressional Budget Office’s tabulations, inequality in America was nearly 5 percent lower in 2013 than in 2007.