The United States is far from perfect on trade, after all, and the same is true of most of our allies.

President Trump is a protectionist. He doesn’t understand the principle of “comparative advantage.” And he’s wrong about the implications of a “trade deficit.”

But that doesn’t mean everything he says about trade is wrong.

He frequently accuses other nations of “unfair” treatment of American products and China is one of his favorite targets.

Here’s the World Trade Organization’s data on tariff rates imposed by the United States and China. As you can see, the United States has lower taxes on trade, which should be viewed as a net plus for the American economy (though we should be at 0.0, like Hong Kong). 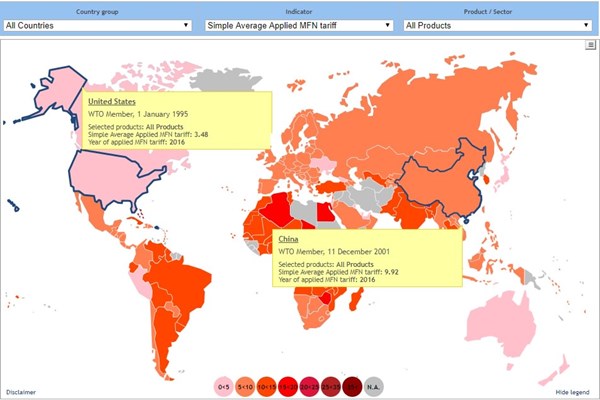 Now let’s look at the trade data from the Fraser Institute’s Economic Freedom of the World.

As you can see, China moved substantially in the right direction in order to qualify for WTO membership in the early 2000s. And the American score has declined slightly since the 1980s.

So Trump is right, at least on the narrow issue of China being more protectionist.

But bad policy by China doesn’t justify bad policy by the United States. Especially when the main victims of Trump’s tariffs will include American consumers, workers, manufacturers, taxpayers, and exporters.

Instead, I explained in March that the United States should use the World Trade Organization to push China in the right direction.

The Tax Foundation has a similar perspective.

There is wide agreement that these concerns should be addressed, but the administration’s broad application of tariffs is not likely to change Chinese government policy, and will cause significant harm to the U.S. economy. The World Trade Organization’s Dispute Settlement Process is an alternative way to address trade disputes, rather than imposing unilateral actions, like tariffs, that damage economic growth and invite retaliation… If an offending nation does not conform with the decision, the nation being harmed can request authorization for suspension of concession, meaning approval to increase its own tariffs, but only enough to make up for the damages caused. This avoids unilateral punishments and retaliations… The World Trade Organization’s Dispute Settlement Process should not be overlooked as an effective tool against harmful foreign trade practices… The U.S. has allies in the IP dispute against China, and even some anti-dumping duties can be defended under WTO rules. But instead, the administration is pursuing a path of broad tariffs that invite retaliation, cause economic uncertainty, and damage economic growth.

Christine McDaniel of the Mercatus Center has a column in the Hill also explaining that the WTO option is far superior to unilateral tariffs.

…tariffs do self-inflicted harm. Imagine being in a gunfight in an old wooden ship, with every shot fired at your enemy putting a hole in your own hull. Eventually, you start to sink. …as for taking our complaints to the WTO, this is a decent bet. We have won most of the cases we have brought, including those against China, which does eventually oblige.

But Ms. McDaniel wants to be even bolder. She’s urging market-oriented nations to create a broad free-trade agreement that goes above and beyond the WTO. China would then feel significant pressure to fix its bad policies to be part of this new club.

…best option is to…Team up with our allies, who are just as frustrated with China as we are. Form a pact in which signatories commit to open trade and investment regimes, sufficiently strong intellectual property rights and enforcement, and legal recourse mechanisms. Most importantly, signatories commit to not engage in trade or investment with state-owned enterprises or those with close ties to state-owned enterprises. This would effectively leave China the odd man out. …China should implement reforms…: a more open trade and investment regime, phasing out state-owned enterprises, stronger patent rights, and legal recourse mechanisms. These policy shifts — a shift in thinking, really — would help put China on a more sustainable path to economic growth.

She’s right that China would benefit. But such a free-trade agreement also would put other participating nations on a better growth trajectory.

The United States is far from perfect on trade, after all, and the same is true of most of our allies.

That kind of win-win scenario would be great news for the global economy. And it would be much better than a potentially dangerous tit-for-tat trade war, which seems to be where we’re heading now.

P.S. The United States also is more free-trade oriented than the European Union.