Turns Out I’m Not Crazy

Recently the CIA released a hitherto classified report acknowledging the existence of Area 51. The agency remains suspiciously silent on the juicy parts: There’s no mention of alien spacecraft or a profitable wing of the U.S. Postal Service operating there. But at least the revelation that Area 51 exists, now officially, validates the underappreciated sentiments of myself and thousands of other armchair conspiracy theorists throughout this great nation.

We’ve believed in the existence of Area 51 for years, long before it became fashionable to discuss at cocktail parties or baptisms. We had two very good reasons for our hypothesis, despite fervent official denials from the government. The first reason was fervent official denials from the government; the other was that the Russians were fairly candid from the late 1990s on about their satellite photos of “a big airbase-looking thingy out in the Nevada desert” in a spot that the U.S. maintained was definitely, absolutely, totally, not a secret military playground. So the math added up. 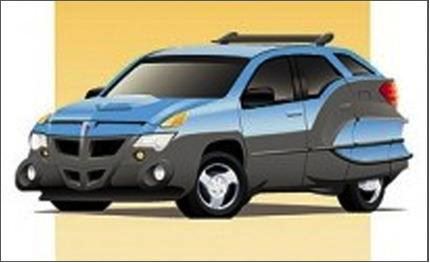 We conspiracists agreed Area 51 existed, but differed over what it housed. On one end of the spectrum you have hardcore extraterrestrial enthusiasts who staunchly maintain that bits of an alien spacecraft (like space hubcaps or a muffler that fell off) are stored at Area 51. The idea is that in 1947, an alien spaceship crashed in Roswell, N.M., when the inhabitants of the town shot it down as the only possible way to ever encourage tourism there. Accordingly the Air Force declared that the smoking debris was a “downed weather balloon,” then gathered up the pieces and spirited them away to Area 51. Since then the debris has been carefully analyzed, studied, and finally incorporated into the 2005 Pontiac Aztek.

The more mainstream camp asserts that the Air Force designs and tests super-secret hardware at its clandestine desert location. The aforementioned CIA document acknowledges this. (The official declassification of Area 51 came through a report on U-2 spy planes, as requested by a tireless George Washington University researcher. The Pontiak Aztek wasn’t mentioned specifically; that part was likely redacted.) For example, if the Air Force wanted to build a stealth bomber with a cloaking device, it might try it out at Area 51. Then the pilots would fly the new vessels over Iowa cornfields and appear just long enough to create interesting episodes of “Unsolved Mysteries.”

I believe I have the exact right dose of paranoia. I’m suspicious of our government, but I also have a deep and abiding faith in its general incompetence. This belief spares me from some of the more gaudy and ambitious conspiracy theories.

By way of example, Buzz Aldrin once punched a man in the face when the mouthy conspiracist taunted him about the moon landing being a hoax. This is an intriguing idea that has persisted for several years, predicated on the notion that the Kennedy and Nixon administrations filmed the moon landing in a secret film studio in order to bluff the Russians and raise American morale. (The Russians had succeeded in launching a dishwasher or something, which they called “Sputnik,” into space, and we were all terrified about what might happen if they started launching refrigerators. Hence the Space Race.)

The moon landing hoax idea is utter balderdash. It would literally be easier for the government to blast three guys into the stratosphere and let two of them play golf on the moon than to fake the whole thing and keep quiet about it for 40 years. If the government had attempted such a hoax, the spurious moon footage would involve a boom mic dangling in the right corner, and one of the “astronauts” would have come clean when, years later, he stopped receiving lunar unemployment checks.

Here you might bring up the fact that recently we discovered the National Security Agency has been wiretapping us and sifting through our e-mails, reading our Facebook statuses late at night, asking our friends if we have been talking about the NSA or at least if we have picked a date for the prom yet, and so on. That’s an important issue, but I don’t feel like the nature of it surprised anyone, just its extent. Did anyone not know about wiretapping under the Bush administration? Did anyone think the thousands of employees at the NSA had quit domestic surveillance and contented themselves playing Sudoku? Being a narcissist, I always assume that people are interested in the minutiae of my phone calls; I just hadn’t anticipated that the NSA had concerned itself with so many other people as well.

Area 51’s existence is not astonishing in fact or scope. The clandestine aspect of the base was clumsy at best. It was the kind of secret where you would go to the top of a mountain, point at the air force base and say, “Look! There’s a base! See?” and the government would respond by buying the mountain.

It would be neat if some extraterrestrials are actually working in the bowels of Area 51, though I doubt it. I suspect the only little green men there are the ones that come printed on dollar bills.

Andrew Heaton is a former congressional staffer, now working as a writer and standup comedian in New York City. He is the author of From the Monkey Cage: Fixing Politics With Wit & Cartoons. More of his wit and insight can be found at his website, MightyHeaton.com.