Trying for Three Lanes of Wealth on a Two-Lane Road

Have you ever been driving flat out on an interstate highway and suddenly encountered a flock of orange barrels and a “lane closed” sign? I’m sure you have. Or worse, have you ever had that happen with less than an eighth of a tank of gas, expecting to fill up at the next major intersection? Meanwhile, everyone around you is in park.
Now, imagine you’ve run out of gas while sitting in traffic on that expressway. A good Samaritan comes along with a Georgia Credit Card (a hose) and another nice guy agrees to give you enough gas to make it to the next exit. You thank both of them, get back into your car and drive to the exit, just making it to a large filling station. But your heart skips a beat when you read the sign: NO GAS.
If all of this has happened to you, I extend my sympathy. But I also hasten to tell you that you understand the current U.S. economic predicament.
As the next chart tells us, the nation’s real GDP growth, most recently running at 2.4 percent and now headed to 1.8 percent, has not broken 3.1 percent—the norm—in years. In fact, we have only broken the long-run average growth one time since 2001. We are operating on a 2 percent highway. One lane is closed. We should be growing at 3 percent. 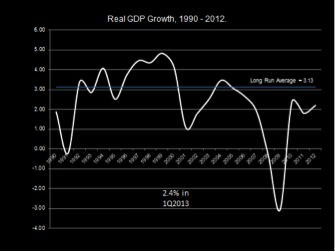 The gap between how much GDP we might be producing on a three-lane highway and how much we are producing with one lane closed is shown next. The potential GDP line is based on an assumed “normal” level of unemployment, something like 5.5 percent, not the 7.6 percent we are experiencing now. Not a pretty picture, is it? 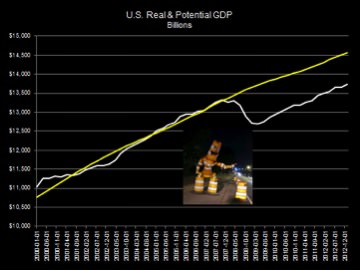 But it gets worse. We are running on borrowed fuel. As the next chart shows, we have deficits as far as the eye can see. We are borrowing from the Chinese, the Japanese, and anyone else who will take our promise to pay. Those happy lenders are funding some of Medicare, Medicaid, unemployment compensation, Social Security and our other "fuel" needs. 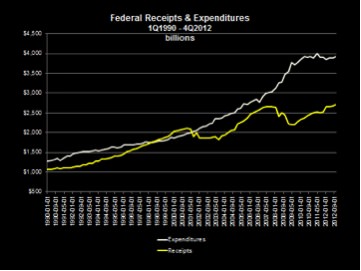 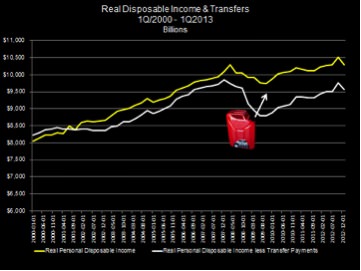 Things are getting a bit scary. Recent reports from Social Security trustees tell us that the Medicare cupboard will be bare in 2026. That’s just 13 years from now. Social Security will expire in 2033, and Social Security Disability funds, which now support close to 6 percent of the labor force, will be gone in 2016. That’s just three years away.
We are out of gas, running on borrowed fuel, and running out of that. The music is stopping. We are sequestering. But we are not coming to grips with the closed lane on the expressway. Instead we are debating whether rich people should pay more taxes and poor people given another boost, somehow confusing tax rates with tax revenue.
Consider the next charts. These were produced by Antony Davies, an economist at George Mason University’s Mercatus Center. The first chart shows the highest marginal rate for income taxes for many years. Notice how high the highest rate stood in 1954: 90 percent! Then, notice how marginal rates have fallen. As they’ve dropped, revenues have just gone their merry way. No matter its height, the highest marginal rate has had no effect. 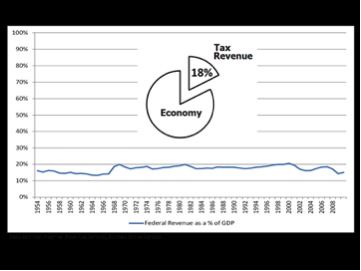 So why are politicians popping blood vessels over whether or not rich people pay a higher rate than Warren Buffett’s secretary? Because the politicians believe those arguments will get votes in the next election. There are far more secretaries than there are Warren Buffetts; if the former believe the latter should struggle more under their tax burdens, there are votes to be had.
But why not get serious about increasing revenues by opening up closed lanes in the expressway? Why not have hearings nationwide on how to get the economy running at full speed?  We did that in 1975 when President Gerald Ford faced a tough closed-lane economy. And we got some good answers. So we don’t need to do it again.
Cut taxes. Reduce the burden of regulation. Get control of the money supply.
Yes, Gerald Ford got some answers, but it wasn’t until Ronald Reagan came to town that the orange barrels finally came down. And bringing them down wasn’t fun.
The longer we wait, the more painful it will be. Meanwhile, we will coast along, trying to create three-lane wealth on a two-lane road. 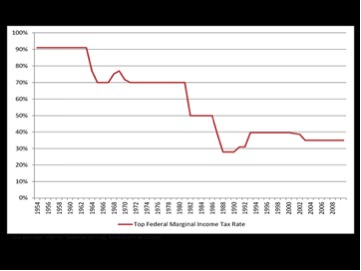