“Those who cannot remember the past are condemned to repeat it.”

The good news is that Donald Trump is not imitating all of Herbert Hoover’s statist policies.

The bad news, as I explain in this interview, is that his protectionist mistakes could trigger a repeat of Hoover’s beggar-thy-neighbor protectionism that wreaked havoc in the global economy during the 1930s.

George Santayana is famous for warning that “Those who cannot remember the past are condemned to repeat it.”

Well, this is why I’m so agitated about what Trump is doing. It’s true that the economy will not be wiped out by the trade taxes he’s imposing today. But what happens when other nations retaliate, and then Trump doubles down with additional taxes on global commerce?

That’s a potential recipe for a big reduction in worldwide liberty. Which is exactly what happened in the 1930s, as illustrated by this chart from an academic study. 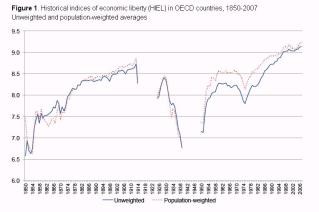 At the risk of understatement, that would not be good for American prosperity. And blue-collar workers would be among the victims since protectionism always destroys more jobs than it saves.

So what can be done about this?

The Washington Post reports on some bipartisan legislation that would curtail Trump’s authority to unilaterally destabilize world trade.

Sen. Bob Corker (R-Tenn.) introduced a bipartisan bill Wednesday that would give Congress new authority to check the president’s trade moves… Corker’s bill would require congressional approval when the president enacts tariffs under the auspices of national security, as Trump did last week in imposing levies on aluminum and steel imports from Canada, Mexico and the European Union. The legislation, which Corker released with a total of nine Democratic and Republican co-sponsors, is the most forceful congressional response to date to Trump’s protectionist trade agenda. …The bill’s prospects are unclear. Corker acknowledged that some Republicans are unwilling to cross the president, and Majority Leader Mitch McConnell (R-Ky.) has ruled out bringing up the measure as a stand-alone bill. But Corker’s bill appeared to be gaining traction on and off Capitol Hill on Wednesday. The U.S. Chamber of Commerce announced its support, as did Koch Industries. …Corker’s legislation would require the president to submit to Congress any proposal to adjust imports in the interest of national security. The legislation would qualify for expedited consideration for a 60-day period. …The co-sponsors are Republican Sens. Patrick J. Toomey (Pa.), Lamar Alexander (Tenn.), Mike Lee (Utah), Ron Johnson (Wis.) and Jeff Flake (Ariz.), along with Democrats Heidi Heitkamp (N.D.), Mark R. Warner (Va.), Brian Schatz (Hawaii) and Chris Van Hollen (Md.).

But let’s stick to the trade issue. Lower taxes on global commerce are one of the great achievements of post-World War II era. Policymakers around the world have lowered barriers and allowed the free market more breathing room.

By the way, politicians from developing nations deserve special credit. They’ve been especially aggressive in lifting the burden of trade taxes. Here’s a chart prepared by the Confederation of British Industry. 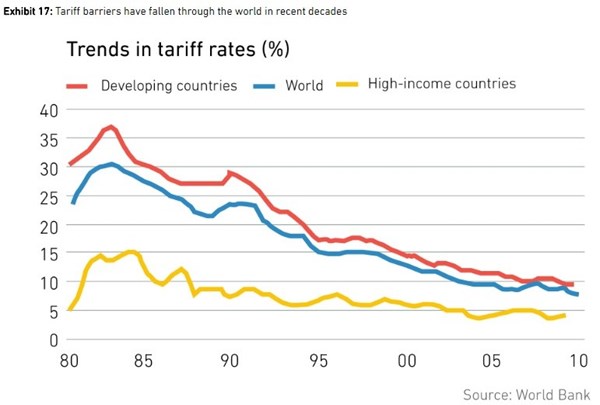 I started today’s column by warning that Trump shouldn’t emulate Hoover. I’ll end the column by pointing out that Reagan is a better role model.

And if that doesn’t work, maybe we can educate the President on why it’s good to have a capital surplus, which is the flip side of having a trade deficit.