Best case scenario: everyone gets poorer.

Not even President Trump’s harshest critics blame him for creating the North Korean problem. The Kim Jong-Un regime’s nuclear weapons capabilities and willingness to brandish them goes back over a decade, to when Kim’s father was still the ruler.

And while each successive U.S. administration has approached North Korea slightly differently, one thing has remained constant: tens of thousands of U.S. troops on North Korea’s border, maintaining a standoff that just passed its sixty-fourth year.

The other constant, since North Korea’s first nuclear weapons test in 2006, has been economic sanctions imposed on the regime under the auspices of the U.N. Security Council. These sanctions began strictly limited to trade directly related to the regime’s nuclear program and gradually widened to include financial and other trade categories.

One need only read this morning’s headlines to judge their effectiveness.

But over the weekend, President Trump saw every president before him and raised them with this tweet: 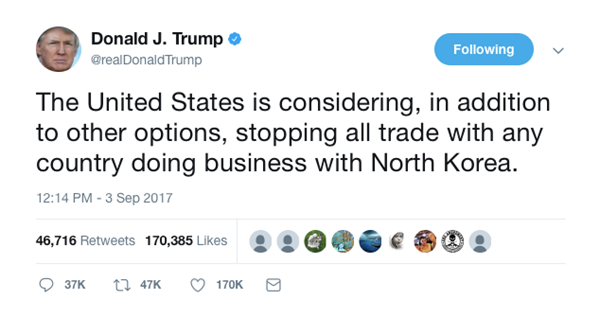 Forget the hubris. Consider the bad economics and lack of historical awareness wrapped up in that tweet. Unfortunately, the president is not alone on either.

Belief in a Zero-Sum Game

This writer has always maintained that President Trump is sincere about what would “make America great again.” Unfortunately, he sincerely believes many things that simply aren’t true. At the core of these beliefs is his mercantilist outlook on trade.

Anyone who would accuse Trump of merely capitalizing on protectionist sentiments in 2016 is misinformed or intellectually dishonest. Trump appeared on the Oprah Winfrey Show twenty-nine years ago, saying the same things about trade he said during his presidential campaign. He was even using many of the same words (trading partners “knocking the hell out of us,” etc.) back in ’88. Trump truly believes trade is a zero-sum game, with winners and losers. Thus, his constant campaign refrain, “We don’t win anymore,” regarding trade deals. Neither side loses in truly free trade, nor in the somewhat crony-capitalist version we endure under NAFTA.

Protectionism was the traditional conservative position for hundreds of years before 20th-century American conservatives built an alliance with disaffected classical liberals and libertarians against progressive liberalism.

Conservatives see all human relations – social, economic, and national – as a natural state of war in the absence of an all-powerful government that thwarts man’s “heart of darkness.” They may disagree among themselves on whether that power should be centralized à la Hobbes, Hamilton and Lincoln, or divided and localized, à la Burke, John Adams, and Robert Taft, but they all believe power must reach into every area of the individual’s life.

International trade is no different. It’s a war, with winners and losers, and the government’s job is to regulate trade to the advantage of its own constituents. This was a major plank of Trump’s campaign. “We’re going to start winning again,” was his constant refrain.

Trump still consistently characterizes trade deficits with statements like, “We’re losing $60 billion per year to Mexico.” But if anyone is losing when Mexico sends $60 billion in products to the U.S. in exchange for $60 billion in steadily-depreciating Federal Reserve Notes, it’s Mexicans, not Americans.

Cutting off trade would have a devastating effect on living standards in the United States.

But even that’s not true. Mexicans are aware of monetary inflation. They still value the dollars more than the products they export, just as Americans value the products more than the dollars. Neither side loses in truly free trade, nor in the somewhat crony-capitalist version we endure under NAFTA. Contrary to the mercantilist thinking underpinning Trump’s rhetoric, the problem with NAFTA is it doesn’t allow free enough trade.

Based on this conservative view of trade, Trump suggests what amounts to “the mother of all embargoes,” against not just North Korea, but any nation that trades with North Korea. In his mind, only North Korea and its trading partners will suffer, not Americans who currently benefit from the countries the embargo would include.

Cutting off trade with China and Mexico alone would have a devastating effect on living standards in the United States, much less with the many other countries who trade with the communist state.

And contrary to conventional mercantilist thinking, there would not be a silver lining in new jobs created in American manufacturing. Yes, Americans may have to purchase some more expensive, American-made products, creating jobs in one small sector. But paying considerably more for the same products would only destroy the millions of jobs they previously created with the money they saved buying those products at a lower price from importers.

Even sanctioning trade with a hostile nation makes the sanctioner poorer. Limiting the amount of oil a country is allowed to export, for example, decreases the total global supply of oil. That increases its price for everyone, including the nation imposing the sanction, over what it would be otherwise. Even if oil prices are falling while an oil sanction is in place, they would fall faster without it.

Cutting Off Trade Does Not Prevent War

Worse than Trump’s failure to see embargoes as self-destructive is his sincere belief they are peaceful and effective. One can argue whether they are truly an act of war. Libertarians would say yes, constitutional conservatives no, based on the power granted to Congress to regulate international trade. But one thing is certain: they always lead to war.

From the 1807 Embargo Act to the 1941 oil embargo against Japan to modern “sanctions” (viz. “embargoes”) against Iraq, cutting off trade with a nation has virtually always preceded war with that same nation. One can argue how strong the cause-effect relationship is, but one thing is certain; cutting off trade rarely, if ever, prevents war.

Neoconservatives and other apologists for sanctions point to the Iran nuclear deal (whether they like that particular agreement or not) as proof sanctions work. They say the economic pressure of sanctions forced Iran to the negotiating table, even if some argue President Obama made a bad deal. Thus, the world was spared a destructive war and peaceful goals were achieved.

Historically, economic sanctions have increased in number and intensity until war eventually broke out.

This argument doesn’t bear close inspection. First, Iran had already signed the Non-Proliferation Treaty in 1970 and maintains to this day they were abiding it. All national and international intelligence confirms they were telling the truth. If they were abiding the Non-Proliferation Treaty, what was the great victory in getting them to sign what amounts to another one? If they weren’t abiding the 1970 treaty, same question.

It is just as plausible the Iranians simply read the writing on the wall and assumed sanctions were a precursor to war, as they always have been. Historically, economic sanctions by one or both sides have usually increased in number and intensity until war eventually broke out. Coupled with consistent statements by American politicians that “all options, including a preemptive nuclear strike, are on the table,” the Iranians had little to lose signing a second treaty promising the same as the first. And they may have legitimately feared an eventual, preemptive strike by the United States.

Despite the histrionics of its leader, the U.S. has little to fear in terms of war with North Korea. The present standoff is more about U.S. global hegemony and some legitimate concern about North Korea selling nuclear weapons technology to hostile actors if they truly have something to sell. What is of more concern is the economic threat against China and Russia, who understand the relationship between economic sanctions and war as well as anyone else.

Meanwhile, there is no talk of war or hostility with Vietnam, a country the United States fought bitterly for over a decade in the 1960s and 70s. I wonder why that is.

Tom Mullen hosts the Tom Mullen Talks Freedom podcast and is the author of Where Do Conservatives and Liberals Come From? And What Ever Happened to Life, Liberty and the Pursuit of Happiness? and A Return to Common  Sense: Reawakening Liberty in the Inhabitants of America.

His podcast episodes and writing can be found at www.tommullentalksfreedom.com.