Falstaff Was Loved but at Great Cost

We're giving Trump too much credit for playing 4D Chess, when all he is playing is Hungry Hungry Hippos

Tyler Cowen’s recent piece over at Bloomberg View argues that the kerfuffle over a production of Julius Caesar that portrayed Caesar as Trump is a sign that we’re living in an age where Shakespeare is particularly relevant to our politics. This is a bad thing, suggests Cowen, because Shakespeare is a writer who specializes in portraying political chaos.

I agree completely. I’ve argued elsewhere that Shakespeare’s sophisticated skepticism about politics makes him (and other early modern playwrights and poets) a literary forerunner of Public Choice theorists like Buchanan and Tullock. A political context that leads one to quote Lear and Macbeth regularly is not a political context to be wished for.

However, later in his piece, Cowen suggests that the place to look for real Shakespearean parallels to Trump is in Shakespeare’s fools. He argues that “The most common features of these characters is that they speak between the cracks in the action and utter sentiments that no one else dares to voice. That’s Trump on Twitter.”

This is a solid definition of the role of ‘the fool’ in many of Shakespeare’s plays, but I’m hesitant to apply it to Trump. It may be tempting to see Trump’s presidency and his Twitter escapades as some kind of performance art that is designed to expose the folly of the American political process. It may even be comforting to persuade yourself that is what’s happening. But I think that’s giving Trump too much credit for playing three-dimensional chess when he’s really just playing Hungry Hungry Hippos—mashing buttons wildly while trying to gobble all he can as quickly as possible.

If you’re looking for a Shakespearean analogue, Trump is Falstaff with power.

But Falstaff’s exuberant disruption of acceptable behavior comes at a great cost. Consider, for example, Falstaff’s management of the troop of foot soldiers over which Hal gives him command in I Henry IV.

I have misused the king's press damnably. I have got, in exchange of a hundred and fifty soldiers, three hundred and odd pounds. I press me none but good house-holders, yeoman's sons; inquire me out contracted bachelors, such as had been asked twice on the banns; such a commodity of warm slaves, as had as lieve hear the devil as a drum; such as fear the report of a caliver worse than a struck fowl or a hurt wild-duck. I pressed me none but such toasts-and-butter, with hearts in their bellies no bigger than pins' heads, and they have bought out their services; and now my whole charge consists of ancients, corporals, lieutenants, gentlemen of companies, slaves as ragged as Lazarus in the painted cloth, where the glutton's dogs licked his sores.

In other words, charged with the duty and high honor of putting together a troop of soldiers to fight in support of his best friend and future king, Falstaff drafts (or “presses”) only those men who are too cowardly or too laden with responsibilities to go willingly into battle.

By carefully ensuring that those same draftees are also reasonably wealthy, Falstaff is able to make an enormous profit as each man bribes his way out of service. In the end, he is left with over three hundred pounds, and a troop of pathetic weaklings. Indeed, a little later, Falstaff blandly refers to his soldiers as “food for [gun]powder” who will “fill a pit as well as better” men.

Falstaff goes from merely reprehensible to potentially treasonous, however. He frequently jokes with Prince Hal about misappropriating treasury funds for his own good, urging him to “Rob me the exchequer the first thing thou doest, and do it with unwashed hands too.” Even after being told that Hal has repaid the money taken in one of Falstaff’s recent highway robberies and also secured him the charge of foot that he turns to such profit, Falstaff has the gall to complain that he is “heinously unprovided” for. He eagerly anticipates the day when Hal will take the throne and Falstaff will have the laws of England at his command. However much Falstaff gobbles it can never be enough. He is an insatiable gaping maw.

Prince Hal, however, has the good sense to cut Falstaff loose before Hal becomes King Henry V and Falstaff becomes even more perilously close to the seat of power.

As Cowen notes, kings must lead. England, Shakespeare tells us, has a lucky escape from a Falstaff running riot through her institutions. That escape is made possible because Hal recognizes the dangers of continuing to play Hungry Hungry Falstaff, and he stops the game.

He cuts his Falstaff off with:

I know thee not, old man: fall to thy prayers;
How ill white hairs become a fool and jester!
I have long dream'd of such a kind of man,
So surfeit-swell'd, so old and so profane;
But, being awaked, I do despise my dream.

We have nearly four more years of ours. 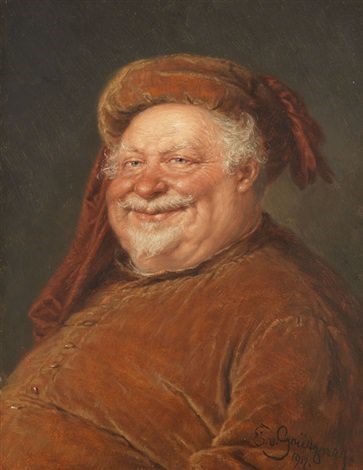