Even Nine-Year-Olds Realize That Free Trade Benefits Everyone

In Money, Greed, and God: Why Capitalism Is the Solution and Not the Problem, Jay Richards describes playing a simple “trading game” as a sixth grader. He and his classmates were given arbitrary items and then had opportunities to voluntarily trade with each other. Richards notes, “I didn’t get the point of the game until I played it again twenty-five years later. As it happens, the game teaches some of the most important lessons in economics.”

Indeed, this simple exercise allows participants to acquire a personal appreciation of the individual and social benefits of voluntary trade. With Richards’ experience in mind, I recently went to Knox Elementary School in Canton, Georgia, to talk about economics and to play a similar trading game with 117 third graders.

It is increasingly common for students to be exposed to economics in primary and secondary school. Georgia is one of 22 states that requires an economics course for high school graduation (others include the four most populous states of California, Texas, New York, and Florida). Only 13 had such a requirement in 2000. Students in Georgia are first exposed to economics in third grade, making it the ideal time to introduce them to the lessons that can be learned from this exercise.

There was nothing distinctive about the trading game I played, except perhaps that the participants were relatively young. On the day of my presentation there were between 22 and 25 students in each of the five classes I visited. The desks in each classroom were arranged in clusters of three to seven students. After reviewing some definitions of basic concepts from their textbook, I told the students that we were going to play a trading game and explained the overall structure of the exercise.

In round 1, each student was given a small amount of money (1, 2, or 3 cents). In round 2, each student was presented with an arbitrary item from my prize bag—inexpensive items such as plastic bracelets, bouncy balls, and Matchbox cars, along with some packs of baseball cards that I had from my youth—and had the option to either keep the money or this item. In round 3, students could voluntarily trade with others in their own cluster of desks (i.e., their local community of three to seven students). In round 4, students could voluntarily trade with anyone in the entire classroom (i.e., trade barriers were eliminated).

Following each round, students reported their level of personal happiness (i.e., utility) on a scale from 1 (“very unhappy”) to 10 (“very happy”). Between rounds we paused to discuss how individual and classroom happiness were changing.

In round 2 I reminded the students that they would subsequently have the opportunity to trade. Several kids clearly understood the implication of this. Between round 1 and round 2 only 64.96 percent of the students experienced a weak increase in utility (the corresponding figure between round 2 and round 3 was 73.50 percent and between round 3 and round 4 was 76.92 percent). This lower figure likely resulted from some students engaging in speculative behavior during round 2. When I asked a girl who experienced a decrease in utility during round 2 why she chose an item that she valued less than the money, she reasonably explained that even though she didn’t like the Matchbox car, she thought others would want to trade for it.

As the game unfolded, some students realized a decrease in utility because they regretted choices made in previous rounds. When trading started in round 3 one boy (who saw that 2 cents wouldn’t buy much from his classmates) asked if he could get his bouncy ball from round 2 back—no, sorry. Others valued their own item less once they observed classmates with “better” items. Such decreases in utility from regret and envy are probably more pervasive among nine-year-olds than they would be among older individuals.

Economic theory suggests that utility should increase between each round. Average utility per student did consistently rise, from 5.6154 after round 1, to 5.8718 after round 2, to 5.9829 after round 3, and to 6.9316 after round 4. This steady increase occurred in spite of the speculative behavior in round 2 and the feelings of regret and envy that some students experienced in later rounds. 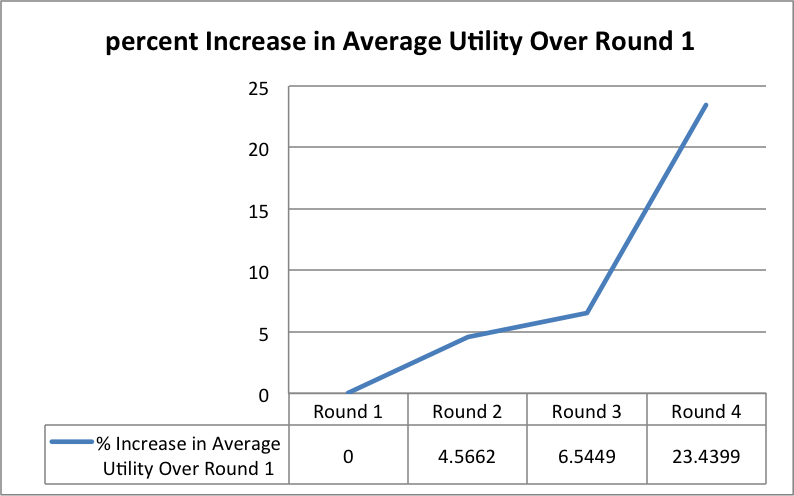 Figure 1 reports the value of and graphically illustrates the percentage increase in average utility over the level realized in round 1. The increase in average utility from 5.6154 to 6.9316 between round 1 and round 4 is an increase of over 23 percent. Furthermore, between round 1 and round 4 a weak increase in utility was realized by 75.21 percent of the 117 students, 72 percent of the 25 clusters of students, and all five of the classrooms. Additionally, figure 1 reveals that the most dramatic increase occurred following the elimination of trade barriers in round 4.

The kids definitely enjoyed the game and, as intended, learned about the benefits of trade firsthand. What I didn’t anticipate is that I too learned a lesson through firsthand experience: it’s very difficult to know the preferences of others. While I’ve long understood this to be true, apparently on some level I thought it applied to others but not to me. Before my visit, I asked for a breakdown of student gender and arrived with an appropriate mix of “girl items,” “boy items,” and “gender-neutral items” for each classroom. As the trading unfolded, I was surprised to see some boys wanting to keep or obtain “girl items” and vice versa. In one classroom two boys jubilantly yelled “We’re bracelet buddies!” after acquiring matching bracelets with brightly colored heart-shaped charms. Similarly, one girl chose to keep a pack of baseball cards, even though in round 4 she was mobbed by nearly all the boys in her classroom, who wanted to trade. I guess it’s not so easy to know the preferences of others after all.

By playing this simple game, the 117 third graders at Knox Elementary School realized the benefits of voluntary trade firsthand. Hopefully it is a lesson that they will remember 25 years from now.