By requiring non-profits to report certain donors' names to the IRS, it opens the door for political persecution, which is not an unreasonable concern.

It’s a judgment call, of course, but I think the IRS’s suppression of the Tea Party was the worst of all the Obama-era scandals. 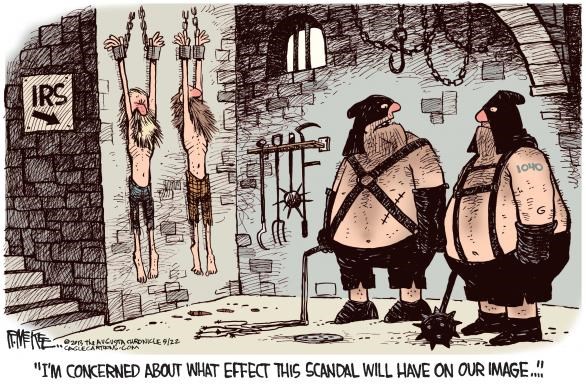 Some people say the green-energy scams like Solyndra should be at the top of the list, but steering taxpayer money to campaign donors was just routine corruption. And the fast-and-furious scandal at the BATF was reprehensible but did not have a systemic impact on society.

Lois Lerner and the other hacks at the IRS, however, did something profoundly worse. They actively used the coercive power of government to suppress political speech.

The bad news is that Lois Lerner didn’t get punished. She’s now enjoying a fat taxpayer-financed pension. And other IRS officials successfully stonewalled with no adverse consequences.

Heck, Republicans actually rewarded the IRS with a bigger budget. And the Trump Administration so far has been AWOL on curtailing IRS abuses.

But that may be about to change. One of the President’s appointees has expressed support for protecting donors to nonprofit organizations.

The Wall Street Journal recently opined on this topic.

….a Congressional hearing this week offered potentially good news to nonprofits whose donors are under political threat. …Montana Republican Steve Daines asked Acting IRS Commissioner David Kautter whether the agency is considering the necessity of IRS 990 Schedule B. These are the forms that nonprofits must supply to the IRS listing donors who contribute more than $5,000. Schedule Bs are supposed to remain confidential, but AGs in New York and California have sought to require nonprofits to file them at the state level. Many Democrats see the form as a gift-wrapped list of donors to target, and a way to chill donations to conservative nonprofits. …Mr. Kautter acknowledged that he was “actively involved” along with Treasury Secretary Steve Mnuchin at offering more donor protection. …Nonprofits would still be required to keep their donor details, and if the IRS or other authorities had valid reason to suspect fraud they could demand to see the records. But requiring nonprofits to provide names each year to partisan AGs or tax bureaucrats is an invitation to repeat the scandal of the Obama years when Lois Lerner and the IRS targeted conservative nonprofits.

Brian Garst of the Center for Freedom and Prosperity also weighed in on the issue, pointing out that government has a sorry track record of persecuting political dissent.

…robust protections for speech were listed first among the Bill of Rights and have long been a cornerstone of our republic. …Like the secret ballot, respecting donor privacy and thus anonymous speech and association is essential to prevent majoritarian abuse and intimidation that subverts democracy. This was a lesson learned in the civil rights era after the shameful attacks on the NAACP and its supporters. …Lois Lerner was found to have illegally shared confidential Form 990 taxpayer information with the Federal Election Commission.

The IRS Doesn't Need This Information

The solution is to not let the government get the information in the first place, especially since it isn’t needed to enforce any tax laws.

Unfortunately, invasive donor reporting requirements instituted by the Internal Revenue Service threaten to chill this critical democratic tool. …Schedule B requires 501(c) organizations to include certain contributors’ names and addresses with their annual Form 990 reports. Yet the IRS has acknowledged that this information has no enforcement value. Instead, its collection creates opportunities for abuse and chills speech and civic participation. …there’s good reason to question the ability of the government to protect sensitive taxpayer information given the history of inadvertent disclosures and information leaks at the IRS. …For minority viewpoints, public exposure can lead to intimidation… Several years ago, the IRS was said to be considering dropping the unnecessary Schedule B reporting requirement, which it was never required by statute to collect in the first place. Unfortunately, the agency did not follow through under President Barack Obama… The Trump administration should do what the Obama administration would not and ensure the right of Americans to participate in the political process without fear that they will be made vulnerable to targeting based on their political views.

Though I think both Brian and the WSJ should have gone even farther and called for the abolition of the charitable deduction in the tax code as part of a shift to a simple and fair flat tax.

Then there would be zero rationale for the government to know about our donations. And since there’s plenty of evidence that nonprofits would prosper without a special preference in the tax code, this would be a win-win reform.

P.S. Privacy is an under-appreciated benefit of fundamental tax reform. Not only would donors and nonprofits no longer have to share information with the IRS under a flat tax, we also wouldn’t need to tell the government anything about our homes since the mortgage interest deduction would vanish. And since the death tax and capital gains tax are abolished, the government would have no need to know about our assets. And since all capital income is taxed at the business level, we wouldn’t have to tell the government about any stocks, bonds, or bank accounts we own.