This Isn't the Way To Do Business 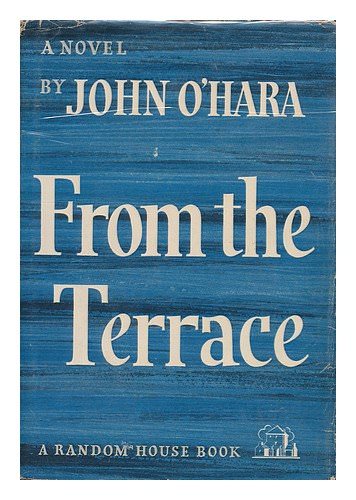 John O’Hara’s From the Terrace, a sprawling novel of business and politics, traces the career of Alfred Eaton from his boyhood in small-town Pennsylvania to his work in business, banking, D.C. politics, and, finally, to his retirement in California. As Howard Thompson observed in his New York Times review of the 1960 film adaptation, its director “logically . . . settled for about fifteen years” of the story. And I’d like to focus in even more closely—on a single conversation.

After college and World War I, Alfred and his friend Lex Porter decide to start an aviation company. Lex and his family will contribute the funding, Alfred will serve as the business manager, and they will hire an outside designer. Their goal is to do for airplanes what Ford, Dodge, and others have done for cars. As Alfred explains in a conversation with his father:

“We’re not deceiving ourselves. All we know is that aviation is the coming industry in this country. In ten years everybody’s going to want aeroplanes.”

“Personally, I’d rather have some Dodge Brothers, common or preferred.”

With the perfect hindsight the 21st century offers, we know the enterprise is doomed from the moment we hear about it. Personal planes still haven’t replaced the car and aren’t likely to. But from the standpoint of an entrepreneur in 1920, it’s a pretty good idea.

It’s a pretty good idea, that is, until Alfred, Lex, and their designer Von Elm try to get down to business. While they begin with a fairly clear plan to “build a small aeroplane of up-to-the-minute design and highest quality workmanship, built to sell to men who could afford Rolls-Royce automobiles,” they rapidly move away from this plan into a deadlock between the demands of practicality and the desire for perfect design. Lex, who wants to experiment and constantly change designs, argues, “If we sell an aeroplane in, say, November 1921, and another one in December 1921, the December one may be so different that you wouldn’t recognize it as coming from the same maker.”

Alfred quite rightly protests that this is no way to do business:

Let’s not think we’re going to build custom-made aeroplanes. I don’t care how much we charge for the aeroplane, we’re not going to start making money until we can produce it in some quantity. We ought to build next November’s aeroplane and manufacture it, produce it, till we have, say, fifty sold. And a year later we manufacture the new model, with all those refinements you speak of. We don’t sit around waiting for some guy to come and ask us to build a special ship for him. We make fifty and sell them.

As he later points out, all this chopping and changing requires only one thing—and that isn’t entrepreneurship or business acumen. It’s an “inexhaustible bank account.” Lex’s response to such critiques is telling: “Jesus H. Christ! Are we going to build Dodges? I thought we were going to build a fine aeroplane.”

This criticism of the very company that Alfred calls a “sure thing” and that he takes as his model, along with the conflict the criticism suggests, are at the very center of their business. It leads to Lex and Von Elm buying expensive engines without Alfred’s approval. It leads to a rift in their perceptions of the business and their plans for its future, and it leads to the company’s eventual collapse.

In my last column I praised the entrepreneurial spirit. And I am an enormous fan of the guts and drive, the expertise and steadfastness necessary in order to start and run one’s own company. But not everyone should do it. Lex shouldn’t do it. He wants to build planes. He wants to design planes. He doesn’t care if he sells them.

We’ve heard a lot lately in the media about how everyone doesn’t need to go to college, and how the ever-growing burden of student loan debt sometimes turns out to have been a bad risk for students, particularly in our sluggish economy. But while I am deeply concerned about that, I am equally concerned about glossing over the rigors of starting, running, and maintaining a business. It would be irresponsible, no matter how much we love entrepreneurship, to let students think that it is somehow a sure road to success, or a straight line to the top, or easier and more certain than a college education. And not only is it irresponsible, it’s insulting to the entrepreneurs who know exactly how much work it takes to get to the top—or even the middle—of an industry.